We’ll admit that Elephant and Castle probably isn’t a destination for the majority of Londoners, who perhaps visit either because they’ve fallen asleep on the Northern Line, or they’re changing to the Bakerloo. Despite appearances however, it hides a few culinary riches, so we decided to explore them for the next stop on our Culinary Tube Map.

The area is home to many Columbian and Ecuadorian people, and this is particularly evident near the roundabout. Behind the infamous shopping centre and under the railway arches you’ll find a row of shops and restaurants selling South American food. Many of the voices you’ll hear on the street in this area speak Spanish and Portuguese, as do the shopkeepers, and we’re greeted several times with a smiling ‘bueno!’.

Probably the most famous South American sight around these parts is La Bodeguita, a vast restaurant on the roundabout decorated with many flags and glitter balls hanging from the ceiling. As far as we can tell it’s known for its vast plates of meat, carbs and avocado known as bandeja paisa, but although we like a big feed as much as the next person we decided to skip this Parthenon to protein with the aim of seeking out some smaller snacks.

Along the backstreets here there are many cafes, shops where spangly lycra jumpsuits are stretched onto mannequins, and a lot of very upbeat Latin American music that somehow gets into bones and makes limbs move of their own accord. That’s our excuse anyway. After a good mooch we settle on La Chatica, a café with a shop at the back selling South American foodstuffs. There are various imported biscuits, sweets and cakes; jars of dulce de leche; sticks of orange guava paste; enriched dough breads which look like Jewish challah; tins of beans and numerous products made from corn and maize.

In the fresh foods section they sell their own cheese, which we think may be like a queso fresco or queso blanco — the piece we buy is a soft, fresh cow’s milk cheese, creamy and light. It’s slightly richer than a mozzarella and soon we’re slicing it onto everything. It’s also excellent with that aforementioned guava paste, like a South American version of cheese and pineapple on sticks. There are empanadas, Colombian cheese filled breads called pan de bono and sanchocho de cola, a meat and corn soup.

We settle in with a couple of Club Colombia beers and contemplate ordering one of two unfamiliar dome shaped snacks, one filled with beef, the other chicken. We decide on the beef. We’re served the chicken. We try to find out what exactly what it is that we’re eating, and at first think it may have been a coxinha de galinha, a Brazilian snack which is a teardrop shaped piece of dough, stuffed with spiced rice and meat. Then we thought it might be a rellena. We’re still none the wiser. The spicing inside is good, but it’s incredibly heavy and a tad dry, sadly typical of the dense, stodgy foods we associate with South American countries. Does anyone know where we might find a good one? Or indeed what it is? 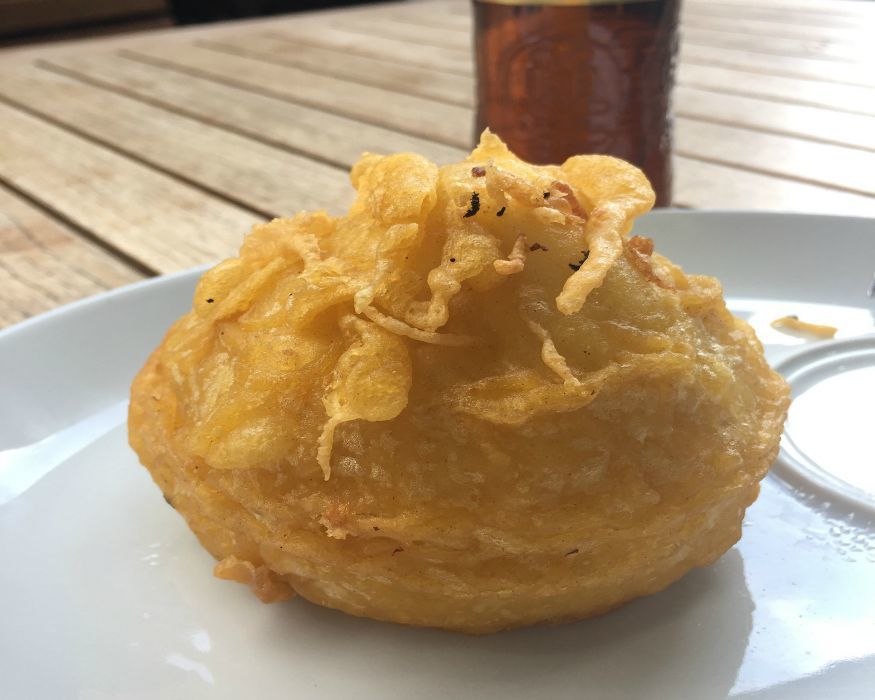 The suspected coxhina at Chatica.
The filling of chicken and rice.

From South America, then, it’s onto Poland on the other side of the roundabout. How very London. Mamuska! Started out inside the shopping centre, but they’ve now moved over the road to a larger site. This is a very basic, no frills Polish place that serves incredibly cheap and fatty foods that hit the spot like nothing else if you’ve consumed too much of the very reasonably priced and dangerously large vodka shots. The pate here is worth ordering for the shock value too, as it’s basically scoops of milky fat on a plate with a few pork bits suspended inside, like a speckled ointment for your insides. Best of the menu is the potato pierogi (dumplings) with sour cream and bacon pieces, which are cheap and filling (£3.50 for 5 pieces).

We don’t find much to excite us inside the new Artworks, a collection of shipping containers in the style of Boxpark (terrible) or POP Brixton (great fun). Steamed buns from a Mauritian restaurant are bland, while a bar seems chaotic even while empty. Other places fail to draw us in, so we decide to take a detour down the Walworth Road (Elephant end only), which seems fair game since it has no tube stop of its own, the nearest being Denmark Hill. We’ve reviewed Korean chicken joint CheeMc already, so instead concentrate our efforts on a little known shop with a tandoor towards the Brandon Street end of East Street Market. Londonist has been frequenting this secret stop for a while, simply because it’s so cheap and the breads are so fresh. For next to nothing you can order a fresh flatbread, slapped into the tandoor to order. Our preference is for the lamacun (Turkish flatbread with spiced lamb), which costs a whopping £1.50.

The time comes for dessert and so it’s back to South America, and to a small café down an alleyway to the left of the The Razor. There are many different cafes ripe for exploration down here and we duck into one — it’s packed with people, from school kids to elderly men. Music plays, bright posters line the walls and a TV is on in the background. What should we order? We ask the proprietor, who points to a woman at a table inside. She’s eating an elaborate ice cream sundae, toped with lurid sauces, spiked with wafers, and sporting a fantastic array of unnaturally coloured ice creams. The bright blue one turns out to be bubble gum flavour, which is a shock since we all know bright blue is the colour of fake raspberry. There’s squirty cream and a surprising amount of really good fruit like apple, banana and ripe chunks of mango. We plough through it, enjoying the high of additives and sugar against the soft, natural fruits. And then it happens. “It’s cheese,” one of us says through a mouthful of sundae. “The bottom of the sundae dish is filled with grated cheese.”

Do you know any culinary delights around Elephant? And what happened to the street food market? Please let us know in the comments!