Economists theorize that, in the so-called rate lockdown effect, homeowners that landed mortgages in recent years with rates 3.5% to 4% might be reluctant to sell their homes in the coming years, which would cause them to forfeit the rock-bottom rates on their existing mortgages. Rates for 30-year, fixed-rate mortgages, now at 4.2%, are widely forecast to reach 5% by next year. 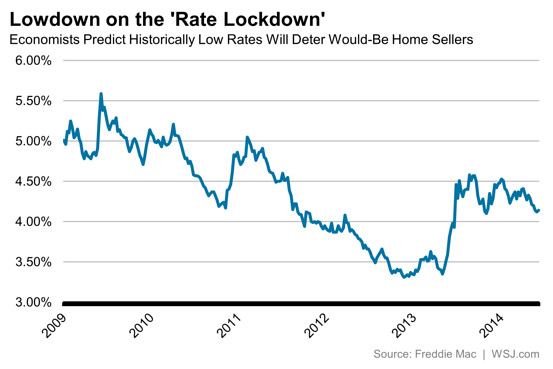 Quantifying the potential drag on home sales from the lockdown effect is challenging, but economists speaking Friday at a Houston conference of the National Association of Real Estate Editors said some type of effect is almost guaranteed.

Stan Humphries, chief economist for real-estate website Zillow, projects that an increase in rates to 5% will cause a 5% decline in existing home sales from current levels. A rise to interest rates of 6% will cause an 15% decline in sales, he predicts.

“We’ve locked all of these people into these low rates, mostly in 30-year fixed mortgages,” said Mark Fleming, chief economist at real estate data firm CoreLogic Inc., at the conference. “There’s a huge disincentive … to sell at any point in the future. My expectation is that housing turnover rates will be down significantly in the future due to this rate lockout effect.”

Earlier this year, researchers at DePaul University’s Institute for Housing Studies in Chicago issued a paper on the lockdown effect. Their projection: Even though rising prices in recent years have brought more home sellers into the market, any steep rise in interest rates likely would nullify that influx by causing more homeowners to want to stay put and thus keep their low interest rates.

Another potential effect of the lockdown effect: An increase in novice landlords. Some economists say homeowners who must move might opt to hang onto their former home and rent it out to keep the low interest rate on the mortgage.

“We have more everyday folks becoming unplanned, accidental landlords in the future because they don’t want to give up their 3.5% rate,” said Lawrence Yun, chief economist for the National Association of Realtors.

Rate increases are a near certainty in the next two years. The Federal Reserve has held rates historically low in recent years to spur a recovery in the economy after the severe economic downturn. As the economy slowly rebounds, the Fed is rolling back its stimulus efforts with an eye toward eventually increasing its benchmark interest rate, the fed funds rate, from historically low levels.