It’s probably no shocker that working moms make less money than women not weighed down by kids. There are reasons for this—new mothers often take long stretches off work, and move into more flexible, part-time positions—decisions that hurt their work experience and pay over the long-term. Researchers have put this so-called “motherhood wage penalty” at anywhere from 3% to 15%.

When you zero in, though, a more troubling trend emerges: Married working moms are taking a much smaller pay cut these days, while working moms who have never been married are actually seeing a sharply bigger one. In a study released Tuesday, Columbia University and Russell Sage Foundation scholar Jane Waldfogel finds that U.S. mothers in their prime-working years (usually defined as 25 to 44 years old) face a roughly 5% “motherhood wage penalty” in the workplace relative to childless women workers, a figure she estimates hasn’t improved much since the late 1970s.

Dividing the working moms into married and never-married women, she finds that the penalty for married women, which used to be around 8% in the late 1970s—meaning these women made 8% less in hourly wages than a married, childless female worker—shrank to around 3% by 2007, just before the recession. The same penalty for never-married women shot up from basically zero to 10.5%. (Various factors, like education, make it likelier that some women will get higher-paying jobs, or become mothers—issues Ms. Waldfogel and her colleague, graduate student Ipshita Pal, controlled for. However, it’s hard to control for the fact that never-married working moms back in 1977 were very different from those in 2007; indeed, there were much fewer of them, and fewer employment opportunities for them, which is probably why there is no “motherhood penalty” for them in 1977.) 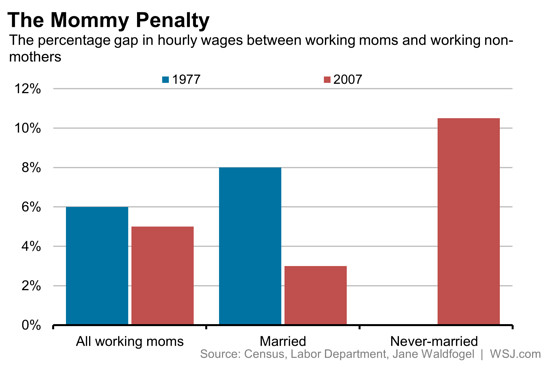 A big factor, Ms. Waldfogel believes, is married working moms are probably getting help from husbands on things like childcare and household chores, allowing them to stay more attached to the labor force. Rather than taking, say, a year off of work and then struggling to return, or moving into a part-time job, these women are continuing to build what economists call “human capital”—all the company- and occupation-specific experience that boosts their value to employers over time. Many married women are finally starting to see the work-related benefits of having a supportive partner that studies have shown men have enjoyed for decades. Never-married mothers, the logic goes, may be less likely to get such support from their partners, and find it harder to stay attached to the labor force. Indeed, some of the partners in question may not be around at all.

Ms. Waldfogel isn’t alone in her thinking. Recent research by the late sociologist Suzanne Bianchi of UCLA (a leader in family demographics research), along with Sara Raley at McDaniel College and Pew Research Center’s Wendy Wang found that an increase in married fathers’ involvement with kids—and specifically “dirty” work like changing diapers, not just throwing a football around—was linked to higher employment and earnings among wives. The causal relationship could very well go the other way too—higher earnings among wives trigger more involvement by husbands. “Fathers who do a little more allow wives to have more space or work more hours or be employed,” says Ms. Raley.

Granted, it’s not entirely about married fathers. The U.S. is the only developed country not to have paid maternity leave, while welfare reform in the 1990s pushed many lower-earning unmarried mothers back into the work force, pushing down working-mom pay relative to non-moms.

Still, Ms. Waldfogel’s findings hint at a much larger social problem: The growing divide between America’s married women, likely to be better-educated and higher-income, and the growing number of unmarried women, who are likely to be less-educated and lower-income. “We may be entering a period of diminished inequality between mothers and non-mothers, but potentially increased inequality among mothers,” Ms. Waldfogel says.

Marriage, in other words, is becoming—like executive compensation and America’s higher-education system—an incubator of growing social and economic disparities.