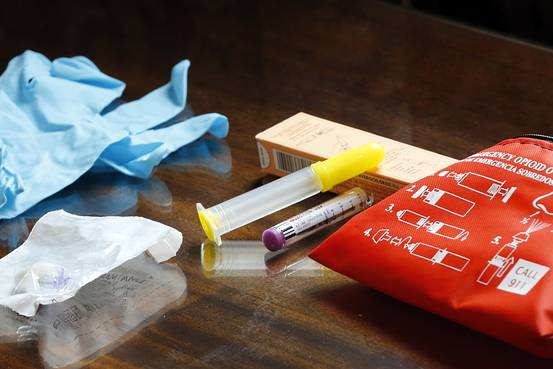 New Hampshire will begin handing out free emergency opioid overdose kit this fall to families and friends of people at risk of an overdose.
JIM COLE/ASSOCIATED PRESS

The death rate among middle-aged white Americans has soared in recent years, driven by an epidemic of prescription drug overdoses, as well as rising liver disease and suicide, according to a new report from economists Anne Case and Angus Deaton at Princeton University.

The report has generated a heavy flurry of coverage due to the shocking nature of its finding—that amid a world of improving medical care, the death rate of a major demographic group is surging, due to overdoses from opioids and other prescription painkillers.

Perhaps because of their economics background, Ms. Case and Mr. Deaton theorized that this overdose epidemic may be tied—at least in part—to “economic insecurity.” This claim is hard to establish but, seeing how Mr. Deaton won the Nobel Prize in economics less than a month ago, worth considering in detail. 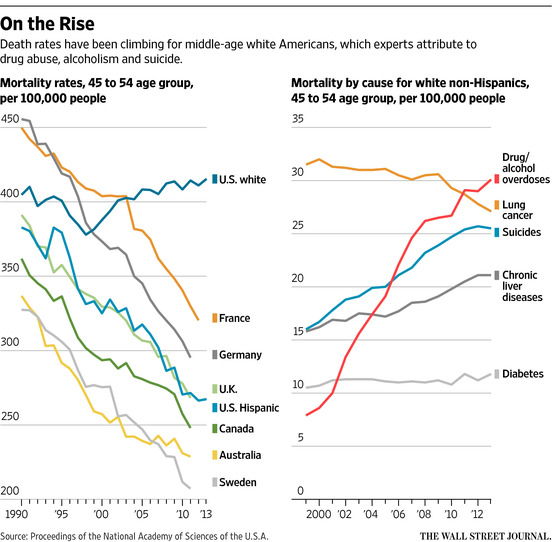 “After the productivity slowdown in the early 1970s, and with widening income inequality, many of the baby-boom generation are the first to find, in midlife, that they will not be better off than were their parents,” they wrote. “Growth in real median earnings has been slow for this group, especially those with only a high school education.”

As their paper shows, the surge in death rates is highly concentrated among whites ages 45 to 54 with a high school education or less; death rates have dropped for the college educated and Hispanics. The overall death rate among blacks is higher than among whites, but has declined over the past 15 years. In 1999, blacks were more likely to die from drug overdoses. Today, whites are.

Not so long ago, the economy was awash in manufacturing jobs. These jobs were relatively high-wage and widely available to those without a college education. In the late 1990s, the industry employed more than 17 million Americans. The recessions of 2001 and 2007-09 have seen that number fall to around 12 million. The economists Henry Siu and Nir Jaimovich have sorted jobs based on whether the work involves routine tasks—broadly speaking, the sort of jobs that take less training or formal education—and have found nearly a 10 percentage point decline in routine work over the past 40 years, mostly since the late 1990s. 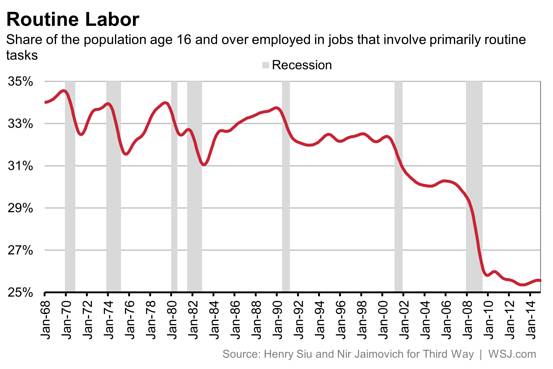 While this rising death rate may shock relatively comfortable and well-educated city dwellers, rural communities and public health officials have been grappling with this epidemic for some time. The federal Centers for Disease Control and Prevention has identified “living in rural areas and having low income” as a particular risk factor for prescription drug overdose. Some communities are inundated with more addiction than they can possibly treat.

It may sound like a slam-dunk case that deindustrialization stripped away jobs and opportunity in middle America, leaving behind little but despair that led to self-medication that spiraled out of control. The Centers for Disease Control has been worried about the surge in overdose rates since well before the recession that started in 2007. The rate of unintentional drug overdoses has been rising steadily since the 1970s. (Since the recession, it may have halted its climb.)

There’s no particularly clear link from year to year between overdose rates and the economy. Some key periods don’t fit the trend. The overdose rate rose during the boom years of the 1980s. Overdosing slightly fell in the early 1990s during a recession. Then the death rate rose again from the mid- to late-1990s.

Median incomes climbed higher throughout the second half of the 1980s and the 1990s. In these periods, unemployment rates declined across industries, education levels and racial groups. The unemployment rate for workers with a high school education dropped below 4%, as did the jobless rate in the manufacturing industry. And throughout this period, the brunt of unemployment fell much more heavily on black and Hispanic workers than on whites.

The prevalence of overdose state by state also has no particularly obvious link to the economy. Swaths of the economically troubled Rust Belt have higher drug-poisoning death rates, yes. But the lowest-income states–Arkansas and Mississippi—have low overdose rates. North Carolina, Arkansas and Oregon have had major declines in manufacturing, too, but have average or significantly lower overdose rates. States in the Southwest have seen some of the smallest declines in manufacturing, but have significantly higher overdose rates. Nor does state-level income inequality show a link: High-inequality states like California and New York have low overdose rates. Utah has one of the lowest readings for inequality, little manufacturing job loss, consistently low unemployment and ranks high in incomes. The overdose rate there is high. Teasing out cause and effect is far more difficult than simply eye-balling state-level correlations or year-to-year changes in overdose rates. But Ms. Case and Mr. Deaton have another cautionary observation: “The productivity slowdown is common to many rich countries, some of which have seen even slower growth in median earnings than the United States, yet none have had the same mortality experience.”

There’s one area where the link between prescription drugs and the economy may be clearer. Whether it’s pain or painkillers that came first, the phenomenon may “help us understand recent large increases in Americans on disability,” the economists said. Over the past 15 years, a growing share of working-age people cite disability or illness as a reason for neither working nor looking for work. This has been a key factor behind a rising share of prime-age U.S. workers who aren’t in the labor force, a trend also at odds with many other developed countries. If overall health was showing nothing but improvement, the rise of disability would be surprising. But, as this research shows, overall health rates are not improving.

In other words, prescription drug addictions may be causing economic challenges by depressing labor-force participation, rather than economic forces like deindustrialization causing prescription-drug addictions. But either way, an urgent health and economic crisis is at hand.

The Death Rate Is Rising for Middle-Aged Whites