The Energy Bust: How Much Like Tech in 2001? – Real Time Economics 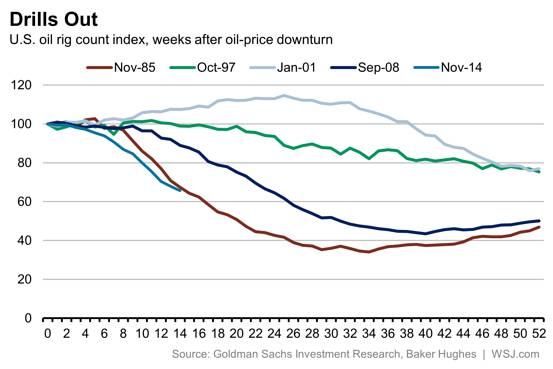 The drop in oil prices over the last six months has already produced the swiftest drop in the number of U.S. oil rigs in the ground, according to an analysis by Goldman Sachs.

Given the potential for a pullback from one sector to spill into others, economists at Wells Fargo explored in a recent research note whether the collapse in oil prices might, like the collapse in technology stocks 15 years ago, prove a harbinger of a downturn in the U.S. economy later this year.

Their answer: Not really.

The tech sector at the height of the 2000 stock bubble was around three times as important to the U.S. job market as energy is today, wrote Jay Bryson, an economist at Wells Fargo.

What about the potential for shocks on financial markets? Here, too, the energy blow looks likely to be significantly smaller than for tech. The Nasdaq index enjoyed a seven-fold increase between 1995 and 2000, Wells Fargo said. Energy stocks, by contrast, gained 144% in the five year period ended last June—an increase that actually lagged the S&P 500 index.

The energy sector, meanwhile, accounts for around 14% of outstanding corporate debt. Assuming that it accounts for a similar share of bank lending, for which data isn’t as readily available, there would be roughly $900 billion in debt outstanding for the sector. That sounds like a lot, but it isn’t. In an economy with $41 trillion in credit outstanding, that’s about 2%.

Why the Dip Into Deflation Should Be Short-Lived

Spending at Gas Stations Rises for the First Time Since May