The Fed’s Beige Book: We Read It So You Don’t Have To – Real Time Economics 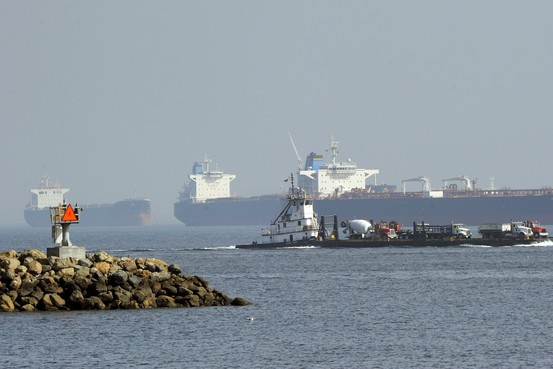 Freighters and cargo containers sit idle at the Ports of Long Beach and Los Angeles as a backlog of more than 30 container ships sit anchored outside the Port in Los Angeles in February. The Federal Reserve said on Wednesday the port disputes affected shipping and business activity throughout the country.
Reuters

U.S. economic activity has continued to expand this year, but snowstorms in New England and a labor dispute at West Coast ports caused slowdowns in some parts of the country, according to the Federal Reserve’s latest survey of regional economic conditions.

Here are some of the anecdotes offered from the Fed’s 12 regional banks:

• Delays at West Coast ports meant some ships were diverted to East Coast ports, according to the Richmond Fed and Atlanta Fed. In the Chicago region, shipping costs were higher when some firms “were forced to use alternate, more expensive supply routes.” In the Dallas region, “trucking firms said cargo volumes declined because of shipping disruptions at West Coast ports, while rail and small-parcel shipments increased in January, and were up year over year.” In western states, retailers with strong holiday sales “would have seen even larger volumes if not for delays receiving merchandise caused by labor disputes at West Coast ports.” The issue also “reduced agricultural exports, as perishable products such as fruits wasted away in storage containers waiting for shipment.”

• The Boston Fed reported businesses were “fairly upbeat this round, notwithstanding selective negative impacts from unseasonably severe weather in southern New England.” Some retailers pointed to strong sales of boots, coats and winter sporting goods. But one retailer said about 200 stores based on New England were closed for a few days because of the severe weather.

• In New York, “the inventory of available rentals has risen at the high end of the market—especially in Brooklyn—reflecting new development.”

• A transportation services analyst in the Philadelphia area said a boom in traffic is “approaching levels last attained during the prior expansion.”

• “Significantly” lower gasoline prices have encouraged some in the Cleveland district to buy SUVs and trucks, with sales up by about 7 percentage points compared with last January.

• A producer of dental equipment in the Richmond, Va. area said “lower patient counts had resulted in reduced sales of his products per doctor.”

• In the Atlanta area, “casual dining establishments saw an uptick in volume as consumers seem to be trading up from fast food options.”

• “As the U.S. dollar strengthened relative to the Canadian dollar over the past few months, border crossings and related retail sales decreased,” the Minneapolis Fed said. Bridge crossings at the International Bridge in Sault Ste. Marie, Mich., were down 12% in December compared with a year earlier.

• In the Dallas region, “energy firms said they have halted hiring and started downsizing, with most expecting payrolls to decline in the first half of the year. Two firms in the retail sector said it was easier to find workers in areas near the oil fields.”

• 2015 is expected to be a “record year for sales” of commercial aircraft, the San Francisco Fed reported. That comes as budget challenges with the U.S. Department of Defense have “reduced new orders and diminished capacity utilization” in the defense aerospace industry.

• Travel and tourism to Southern California increased compared with the same period a year ago, particularly from international tourists. “Spending was strong in airport duty-free shops, despite the increase in the value of the dollar.”