Dallas Federal Reserve Bank President Richard Fisher likes citing an old quip from the late economist John Kenneth Galbraith that the purpose of economic forecasting is to make astrology look respectable. Mr. Fisher has good reason to favor that quotation. He and his colleagues at the U.S. central bank have consistently overestimated the U.S. economy’s strength for years.

The downward-sloping evolution of the central bank’s forecasts for economic growth in 2014 is a case in point. At the Fed’s meeting Wednesday, it sharply downgraded its 2014 “central tendency” forecast (a range that excludes the three highest and three lowest of the 16 officials’ estimates) for economic growth to just 2.1%-2.3% from 2.8%-3.0% in its March projections. This chart provides a look back at the central bank’s official forecast range for annual growth in 2014 since that year became part of the forecast horizon, in 2012. 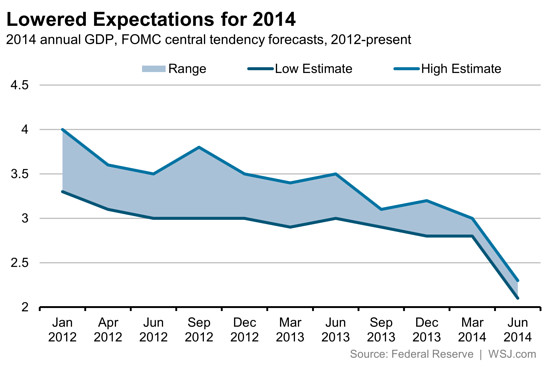 Fed officials have conceded their mistakes, as have many private and academic forecasters who not only missed a deep recession but also overestimated the rebound’s likely strength. But Fed officials remain optimistic. Look no further than this week’s revisions which, despite the pessimism about 2014, continues to see a growth pick-up to around 3% next year, a rate above what many economists consider the highest potential rate possible when the economy is fully utilizing its labor and capital resources while maintaining stable inflation.