But is that definition outdated? That’s the question behind a move among federal government agencies to reclassify as “manufacturers” companies like Apple Inc., which controls every aspect of the iPhones and other products it sells–except their actual fabrication. Production is done by Chinese contractor Foxconn. 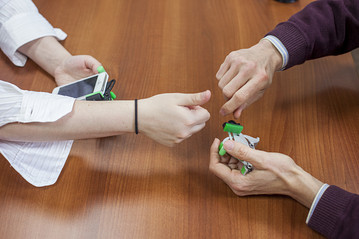 Some manufacturers design and control all aspects of their products, but don’t do the actual manufacturing of the items. Here, employees of Carson Optics discus their new iPhone product for their Hookups Universal line that will come out this summer.
Jason Andrew for The Wall Street Journal

There are many companies like Apple. And in a twist only a government bureaucrat could love, the formal term for them is “factoryless goods producers.”

But should they be counted as manufacturers in government statistics? A proposal to do just that was published in the Federal Register in May and has sparked howls of criticism from labor unions and others who say it would gloss over the erosion of domestic manufacturing. The filing points out that companies like Apple “bear the overall responsibility and risk for bringing together all processes necessary for the production of a good in the manufacturing sector, even if the actual transformation is 100 percent outsourced.”

A group of labor and trade groups issued a press release this week, noting their members have lodged at least 26,000 comments objecting to the move so far.

The current classification system is over six decades old, and didn’t anticipate the rise of global production networks. As a result, companies like Apple are usually lumped in with wholesale firms. But those are companies that just buy and sell goods. Apple is something entirely different.

Advocates of the change say it makes more sense to count them as a subcategory of manufacturing.

Andrew Bernard, a professor at the Tuck School of Business at Dartmouth University who has studied the issue, says the system needs to be updated.

“This has the potential to give us a clearer view of what’s really going on in the economy,” he says.

If implemented, the proposal would impact an array of government gauges—from the producer price index to productivity—and would increase the number of American manufacturing jobs, since many but not all of the U.S.-based workers for the factoryless goods producers would be counted.

The proposal is part of a larger revamp of government measurements that would change how some activities by factoryless goods producers are viewed in trade gauges. For instance, a company that sent silicon wafers overseas to be processed into semiconductors in a foreign factory would no longer be counted as exporting and importing goods—but rather “semiconductor manufacturing services.” The overall trade balance would remain the same, but the size of the trade deficit in goods could shrink.

The proposal on how to define factoryless goods producers still has to be approved and wouldn’t be implemented until at least 2017. The Bureau of Labor Statistics, one of the agencies working on issue, has a note on its website that says it is still assessing whether it’s even feasible to identify these kinds of companies and collect meaningful data on them.