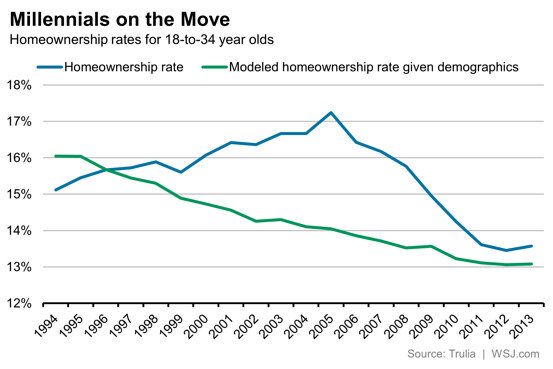 More millennials became homeowners last year, a sign that the homeownership rate among America’s young adults may have hit bottom, according to a new analysis of Census data published Wednesday.

While still historically very low, homeownership among 18-to-34-year-olds increased last year, even as it declined for 35-to-54 year-olds, according to a report by Jed Kolko, chief economist at Trulia Inc., the online real-estate information company.

Mr. Kolko’s analysis also says demographic changes among young adults, including delaying marriage and parenthood, account for nearly all of the declines in homeownership among young adults. Many of those changes, he says, were well underway even before the recession hit.

This undercuts the popular narrative that millennials have been irrevocably scarred by the housing bust. Rather, it suggests the subprime-mortgage bubble of the past decade fueled purchases that otherwise wouldn’t have taken place due to demographic changes that were already well underway.

The analysis, meanwhile, shows that homeownership rates for 35-to-54 year-olds remains at new post-crisis lows, even after adjusting for demographic changes. 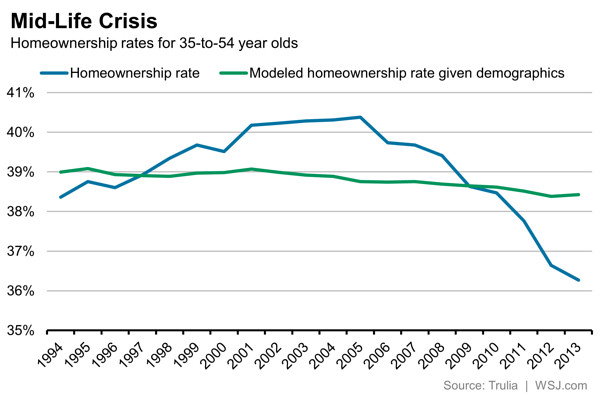 Mr. Kolko’s adjusted version, what he calls the “true” homeownership rate, eliminates this distortion by looking at the entire population and not just those that have formed households.

The second part of Mr. Kolko’s analysis shows that almost all of the decline in the homeownership rate is due to demographic shifts and not the recent recession. For example, the marriage rate among young adults has dropped by more than a third since 1983. Deferring marriage means more Americans may also buy homes later in their lives. Young adults are more diverse. The share of non-Hispanic whites fell to 57% last year from 73% in 1983.

Mr. Kolko looked at what might have happened to the homeownership rate after 1999 solely based on these demographic changes, in which the parts of the young-adult population that grew fastest were already those least likely to own homes. It shows that “demographics alone would have predicted a steady decline in the true homeownership over the past two decades,” he writes.

The good news, he says, is that “there probably hasn’t been a huge shift in millennials’ attitudes towards homeownership…since today’s millennials are roughly as likely to own homes as people with similar demographics two decades ago.” The bad news, of course, is that these demographic shifts aren’t likely to reverse, leaving little room for young-adult homeownership to increase.

Finally, Mr. Kolko finds that the true homeownership rate for 35-to-54 year-olds is still declining. Moreover, after adjusting for demographics, which haven’t been as pronounced for this part of the population as they have for millennials, the homeownership rate is at its lowest level in at least two decades. “The real missing homeowners are the middle-aged,” says Mr. Kolko.

This shouldn’t be a huge surprise. Most millennials weren’t buying homes eight years ago, when the foreclosure crisis hit, but many Americans who are 35-to-54 years-old today were much more likely to be purchasing homes last decade.