The Homeownership Rate Is Near a 30-Year Low. Could It Be Hitting Bottom? – Real Time Economics 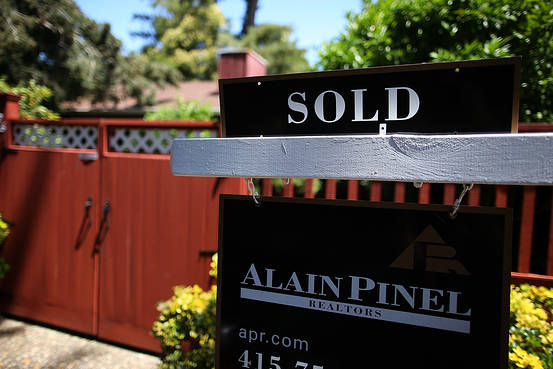 Mark Zandi, chief economist for Moody’s Analytics, said the numbers could show that the homeownership rate, which has been declining steadily for a decade, is finally leveling out.
JUSTIN SULLIVAN/GETTY IMAGES

The homeownership rate remained near its lowest point in three decades in the third quarter, but economists said the good news is that it may not go much lower.

Not seasonally adjusted, the homeownership rate ticked up slightly to 63.7% from 63.4% in the last quarter–still near its lowest point in 30 years.

The seasonally adjusted homeownership rate remained at 63.5% in the third quarter, according to estimates published by the Commerce Department on Tuesday, unchanged from the quarter earlier. 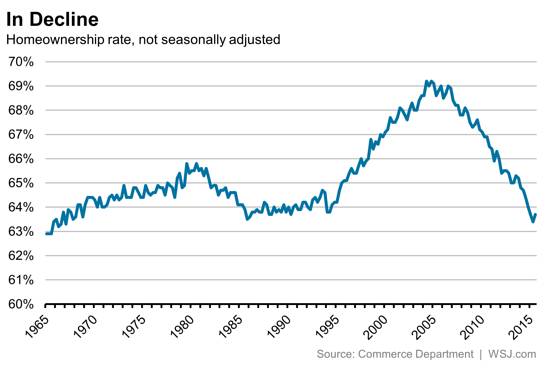 Mark Zandi, chief economist for Moody’s Analytics, said the numbers could show that the homeownership rate, which has been declining steadily for a decade, is finally leveling out.

“I don’t expect any significant increase any time soon, but I think we’re finally at bottom,” he said.

The quarterly estimates are viewed as not terribly reliable by some economists and the overall trend still points to a declining homeownership rate.

The numbers underscore a worrying trend, according to economists, as the housing market is strengthening but leaving many renter households behind. Home prices grew 4.7% in the year ended in August, according to a report released Tuesday by S&P/Case-Shiller Home Price Index.

But while strong price growth is good news for current homeowners, because prices are growing more quickly than incomes it is making it difficult for renter households to afford homes. A lack new home buyers making the transition from renting poses a long-term challenge to the strength of the housing market.

The vacancy rate for rental housing rose to 7.3% from 6.8% in the second quarter. It was still slightly lower than 7.4% the same time last year.

Joe LaVorgna, chief U.S. economist for Deutsche Bank, attributed the uptick in rental vacancy to nervousness about the recent loss of momentum in job growth and other signs of a slowing economy. Even so, he foresees the rental vacancy rate resuming its retreat and homeownership continuing to decline slowly.

“If you’re of the view that the economy is going to continue to grow, albeit modestly, which is my belief, then it makes sense in this uncertain world that people would more likely be renters than homeowners,” Mr. LaVorgna said.

Renters Will Continue to Struggle for the Next Decade, Harvard Study Says