The IMF Is Pushing for Carbon Taxes, But at What Price? – Real Time Economics 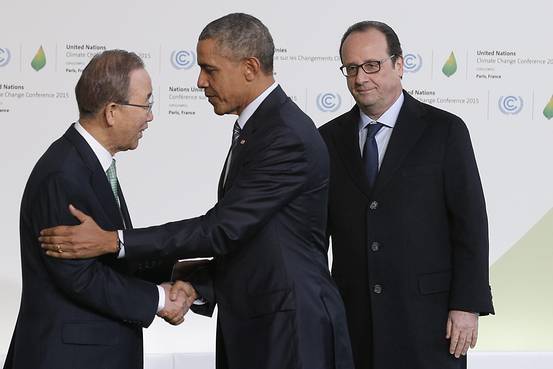 As world leaders try to hash out a controversial deal to cut greenhouse gases in Paris, the International Monetary Fund is ramping up calls for carbon taxes.

But at what cost? Even the world’s premier economic counselor is struggling to answer that question.

A host of factors are complicating the issue.

The economists say an era of low fossil-fuel prices is discouraging development of low-emission energy technology and intensifying the need for governments around the world to impose carbon taxes.

Today’s global supply glut is unlike those of the past, the two economists warn. Historically, low energy prices choked investment in new production, pulling prices back up.

“The dynamic adjustment to low oil prices may, however, be different this time around,” they said.

Oil fields can be tapped much more quickly and cheaply than in the past. New technology has vastly expanded the world’s available fossil-fuel resources. The world’s largest oil exporters are keeping their spigots open as they scramble to cover gaping holes in budgets. With anemic global growth and higher energy efficiency, there is a yawning gap between demand and supply.

The IMF worries that glut may derail expansion of low-emission energy. Creating a carbon tax, therefore, would fuel markets that valued low-carbon technology or other ways of cutting emissions.

And unlike the way the U.S. is currently trying to regulate emissions, a tax on the carbon content in fossil fuels would raise revenues that could be used to fund the low-emission energy sector, or any other national budget priority, the IMF argues.

Ian Parry, the IMF’s principal environmental economist, estimates a tax of $30 a ton of carbon dioxide could raise revenues in the U.S. by nearly 1% of gross domestic product. (The flip side of that coin is the damping effect such a tax would likely have on consumer spending and corporate investment.) But determining the “right” cost of carbon is a slippery task.

For example, just as the price of energy is determined by the supply, the price of greenhouse-gas emissions will in large part be determined by the amount policy makers deem appropriate. They are struggling to figure that out: Many scientists say the benchmark target underpinning leaders’ talks in Paris this week is an arbitrary threshold based on tenuous research.

Nearly 40 countries already have national carbon-pricing programs, largely represented by the European Union’s emission trading system. Along with some minor regional efforts, those cover about 12% of global emissions. With prices typically around $10 a ton of CO2, those efforts are insufficient to cut emissions to levels officials in Paris are considering.

The U.S. Interagency Working Group on the Social Cost of Carbon in 2013 suggested a range of $12 a ton to $129 by 2020. Based on one IMF economist’s calculations, that could add on the high end more than $40 to every barrel of oil.

The IMF doesn’t make an official recommendation for an appropriate carbon cost. (Nor has it published estimates for the potential net impact of assessing carbon taxes on global growth.) But a paper published last year by the fund’s fiscal affairs department said an average of $57 a ton for the top 20 largest emitting countries would cut global emissions by around 11%.

That’s roughly the amount needed to meet the level the United Nations Environmental Program has targeted by 2020. Besides valuation, carbon pricing faces a host of other issues likely to plague policy makers. One is whether politicians will be willing to push through a carbon tax when the world is already struggling to boost consumption. The IMF says policy makers should take advantage of cheaper oil prices to levy new taxes, but global growth is at its weakest level since the financial crisis.

The key challenge, Mr. Parry says, is how authorities cut emissions “with policies that do not overburden the economy and that deal with such sensitive issues as the strain higher energy prices place on vulnerable households and firms.”

Another problem is the extent to which advanced economies will be willing to foot the global bill for carbon taxes and the added cost of mitigating against the effects of a potential warming of the climate. Developing economies say rich countries should cover such costs, allowing them to grow without the burden of carbon taxes.

Mssrs. Obstfeld and Arezki suggest that carbon pricing should reflect not only the potential domestic damages from emissions, but also the damages to foreign countries.

Signaling the challenges to such an effort, they direct readers to a paper that says trade sanctions may be the only way to spur international action.