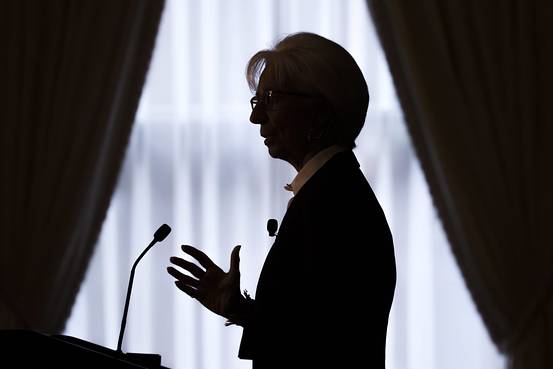 International Monetary Fund chief Christine Lagarde recently shared her thoughts in an interview with The Wall Street Journal. Find out her dream job, who she hates, and what makes her feel like she is in a straitjacket.

On whether she plans to run for president in France next year: “It is important for the institution not to have a sense of vacuum or lack of decision. Toward year-end, I should have a little dialogue with the membership. And then I’ll have to really decide from a personal point of view, and with a personal and family agenda, what I can do.”

On her leadership style: “I am told that Dominique [Strauss-Kahn] worked more on a one-on-one basis, matured his decision-making process in a much more exclusive circle. I brought everybody around the table.…It’s by bringing people together that we make the institution stronger.”

“There is a lot that is attributable to a personality, and part of my personality, of course, is being a woman. It may be, because people tend to be territorial, men tend to be a little be more territorial, so to the extent that I’m not really a physical threat, because men don’t have to show off to me, because a man-woman relationship is of a different nature, that helps.”

On Greek debt-restructuring talks: “You had some European leaders saying, ‘What’s a [Debt Sustainability Analysis] anyway?’ and taking numbers from the sky….I left the room at one point….It was a combination of complacency, because they just wanted to get a deal, get it done, but they were also prepared to accept numbers that just didn’t make as rigorous sense as we thought they should have….I said, maybe everybody needs to just pause and think it over and decide whether we can work together. I very rarely do that, very rarely. It’s just not my style, and I don’t do it in a brutal way. It must have been 3 a.m. in the morning as well, and you need to pause and have some chocolate as well….I then came back to a deal that we were prepared to accept.”

On IMF governance reforms: “My greatest frustration is the quota reform in the U.S. because it’s been with us all along. I think we’ve done everything we could and it’s the kind of the obstacle or the straitjacket where there’s nothing you can do to address it. It’s out of our hands.”

Her fantasy job: “My real dream is to be a performing pianist.”

On what drives her: “It is certainly more people than power.…I have that inner sense of justice and fairness.…I really love people. I find in every human being something interesting, good, worthy of being developed. And I can’t stand bastards….We can also tell people off when they’re not doing things in the public interest, when they claim to be and they don’t….That is power: the ability to tell people the truth, maybe when they don’t want to listen to it….If was not in the position where I am, I could not say that, I could be put in jail, I could be banned, I could be told off, taken out of the room by police forces.”

On whether new global institutions erodes the IMF’s relevancy: “Sometimes there is a sense that the IMF will be out of business because the crisis is vanishing and growth is back. We don’t have that feeling.…First of all, we have been doing it for the last 70 years. It’s tricky and complicated domain that’s based on confidence, skills, expertise and diversity. Second, I think one of the strengths of the institution is the way in which its risks and portfolio are completely hedged across the world. To only rely on a small group of countries however respectable and on the uptrend they are.…it’s not the same. It might be complementary, but it’s not competition.”