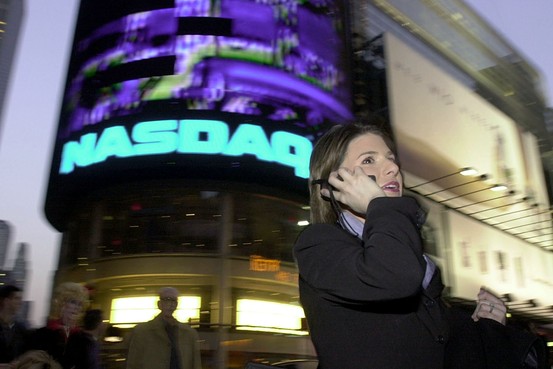 I, for one, miss the sock puppet. I miss the truck driver who claimed he bought an island by trading stocks online. I miss the day Cisco Systems became the world’s most valuable company even though people weren’t sure what it did. I miss Time-Warner selling itself to AOL. I miss the bubble.

Or more precisely, I miss what the bubble represented. I don’t miss the destruction of wealth when the Nasdaq bubble burst. (And it was obvious it was a bubble to most everyone, though no one knew when, or why, it would pop.) But like most bubbles, the Nasdaq bubble was rooted in something real: the technology and the Internet were changing everything. People really believed there was a new economy.

The Nasdaq 15 years later is once again at 5000 and it’s no longer a bubble. It traded at an insane 132 times earnings then, versus a merely rich 32 times earnings now. (And with bond yields at 2% instead of 5%, high valuations are more supportable now.) These days, “new economy” evokes dystopian rumblings of stagnant wages and wealth inequality. 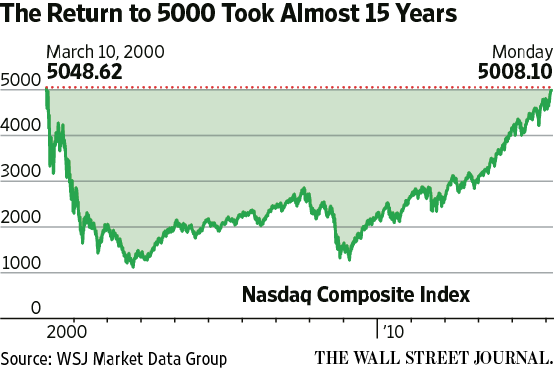 Aswath Damodaran, who teaches at New York University and blogs at Musings on Markets, notes that tech went from 6% of total stock market capitalization in 1990 to 29% at the peak of the Nasdaq bubble, and has held steady at 20% since 2009. “Technology is now the largest single slice of the equity market,” he write. “Just as growth becomes more difficult for a company as it gets larger and becomes a larger part of the economy, technology collectively is running into a scaling problem, where its growth rate is converging on the growth rate for the economy.”

Tech today is relatively mature. Just 13% of tech companies are under 10 years old; 41% are 25 or more years old. Says Mr. Damodaran: “While being in existence more than 25 years may sound unexceptional, given that there are manufacturing and consumer product companies that have been around a century or longer, tech companies age in dog years, as the life cycles tend to be more intense and compressed. Put differently, IBM may not be as old as Coca Cola in calendar time but it is a corporate Methuselah, in tech years.”

These oldsters, he finds, actually trade at cheaper valuations than similarly aged non-tech companies, and are returning more cash to shareholders in the form of dividends and buybacks. Tech’s youngsters are actually growing more slowly than their non-tech peers. This is all evidence of a mature and sensible market, but also a less optimistic  one.

All five of the largest Nasdaq companies in 2000 were mainly business-facing companies while four of the five largest today are consumer facing companies. Apple and Facebook are producing genuine benefits for consumers around the world, but they are not revolutionizing business and life the way the innovations of the first Internet bubble did.

The first Internet boom really did supercharge economic growth. From early 1997 through mid-2004, productivity grew at an astonishing 3.5% per year. Since 2009 it has averaged 1.4%. To be sure, many of the benefits of the consumer Internet today are not captured in productivity or GDP, such as the hours spent on social media or the ease of looking up information on the Web. But those advances are incremental and would not have been possible without the more sweeping innovations of two decades earlier. This Nasdaq 5000 would not have been possible without the first Nasdaq 5000.

Of course, advances in robots, machine learning and social media may one day revolutionize the economy. Today, techno-optimists and techno-pessimists are arguing passionately precisely over this question.

Fifteen years ago, there were no techno-pessimists. I miss that.

Video: This Is Not Your Father’s Nasdaq 5000