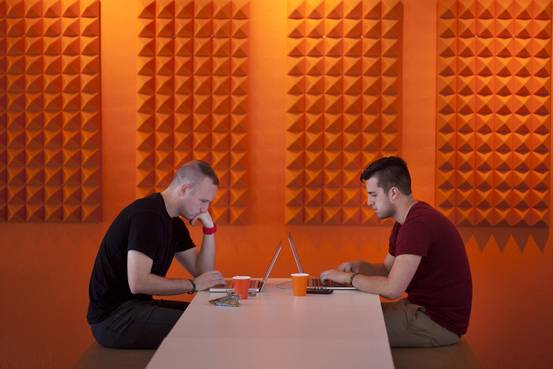 Y Combinator, based in Mountain View, Calif., has helped launch roughly 900 companies. A decline in startup has been a puzzle for economists and a potential roadblock for economic growth.
PATRICK TEHAN/TNS/ZUMA PRESS

America’s entrepreneurs still hadn’t regained their footing six years after the recession ended, a troubling sign for an economy that once counted on fast-growing startups for employment and ideas.

A new report by the Labor Department shows 232,000 establishment “births” in the second quarter of 2015, a slight decline from the prior quarter. Those accounted for 831,000 jobs.

As a share of the overall labor market, the number of jobs attributed to such births has fallen noticeably since before the recession, from about 12.5% of the total to a little more than 11%. Commerce Department data, which isn’t as current but reaches back to the 1970s, shows the trend stretching back decades. 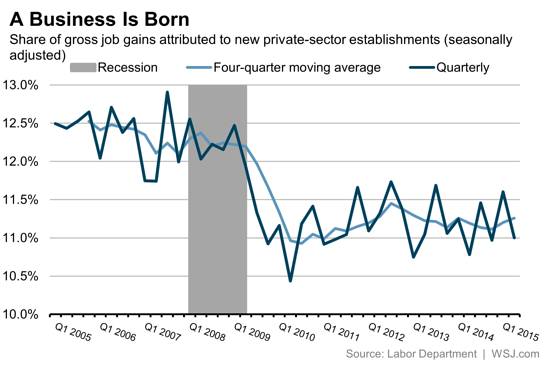 Overall, of course, the economy has been adding jobs at a steady clip. Opening and expanding private-sector establishments added a seasonally adjusted 7.6 million jobs while those contracting and closing shed 6.7 million during the second quarter of 2015, the Labor Department said. All together, there was a net gain of 829,000 in the three-month span. Every sector except natural resources and mining added jobs.

But the apparent loss of dynamism—the decline of startups—has been a puzzle for economists and a potential roadblock for economic growth. The creation and destruction of companies and jobs should, at least in theory, make way for new technology and innovation, allow people to better match their skills to openings and boost productivity.

The significant decline of high-growth young firms in the tech sector could be particularly problematic.

But the cause remains elusive. Credit constraints, investment in machines rather than labor, outsourcing, regulations and demographics all could be factors.

John Haltiwanger, an economics professor at the University of Maryland, has written extensively on the topic. In an August 2015 research paper, he noted:

Startups and young firms have disproportionately contributed to job creation and been key sources of innovation and experimentation. From this perspective, the declines in dynamism and fluidity would appear to have adverse consequences. However, it could be that shifts in the business model and changes in the way that workers build careers imply that job creation, productivity and earnings growth can be achieved without such a high pace of worker and job reallocation.

What Happened to the Breakout Startup?

Starting a Business is Easy (for Harvard Business Grads)