The New U.S. Digital Divide: Between the Haves and the Have-Mores – Real Time Economics 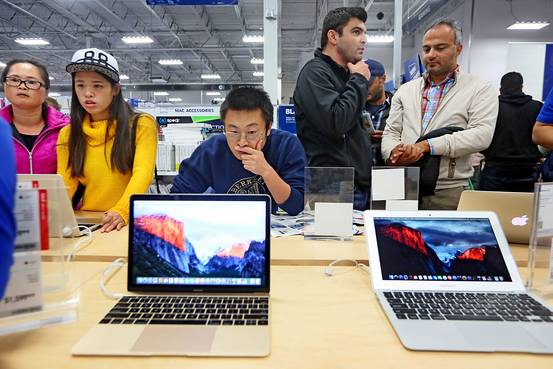 Nearly everyone is benefiting from technology at some level, from consumers driving home with the help of GPS to small businesses selling their wares online. But some “frontier firms,” those on the leading edge of digitization, have made substantially more investment in digital technology and are making far better use of it, says a new McKinsey report.
SANDY HUFFAKER/GETTY IMAGES

The rich are different from you and me. They have more technology.

That’s the conclusion of a new report from the McKinsey Global Institute, “Digital America: A Tale of the Haves and Have-Mores,” which finds that the sectors, firms and people investing more in digital technology are reaping outsized rewards.

The authors start from the premise that nearly everyone is benefiting from technology at some level, from consumers driving home with the help of GPS to small businesses selling their wares online. But some “frontier firms,” those on the leading edge of digitization, have made substantially more investment in digital technology and are making far better use of it.

The report measures digitization along three axes: investment in assets like computers and data storage, usage of technologies like payment systems or social marketing, and how digitally enabled the workforce is.

“The companies that use digital technology more seem to have higher growth, higher profitability, and are disrupting everyone else,” said James Manyika, a director of the McKinsey Global Institute and a co-author of the report. The divide between the “haves” and “have mores” shows up not just between firms, but across sectors. Digitization has made little inroads in construction, health care and agriculture, all sectors where productivity growth has been negative between 2005 and 2014, according to the report. Leading sectors have posted productivity growth ranging from 2.9% in oil and gas to 4.6% in ICT over the same period.  The Commerce Department estimates that overall productivity in the nonfarm business sector grew 0.5% annually on average between 2007 and 2014.

At the individual level, that translates to faster wage growth in those sectors. Sectors further along the digital labor index, which measures how many occupations and tasks are digitized and the penetration, or “deepening,” of digital technology, have seen wages grow between 4% and 5% between 1997 and 2014, well above the 2.4% economy average, the report said. Mr. Manyika said sectors on the low end of the index were poised to take advantage of huge opportunities, particularly in data science and the “Internet of things,” in which objects use sensors and computers to send and receive data. And the report estimates that the impact of digitization on three aspects of the U.S. economy—the labor market, the Internet of things, and big data analytics that boost productivity—could add $2.2 trillion to GDP by 2025. But that requires training people who can work with this new technology. Developing that workforce should be a joint effort of business, individuals and public institutions like community colleges, Mr. Manyika said.

“There’s been a very clear signal that in the U.S. economy, there are greater returns to people people studying STEM (science, technology, engineering and math) disciplines,” he said. “How do we create the right incentives for companies to train workers, for community colleges to be more tightly linked to companies so what they teach becomes more relevant, and how do you encourage students to learn the right disciplines?”

Goldman Sachs and J.P. Morgan Can’t Agree Why the Economy’s Productivity Has Slumped