The Next Challenge For Mortgage Lending? – Real Time Economics 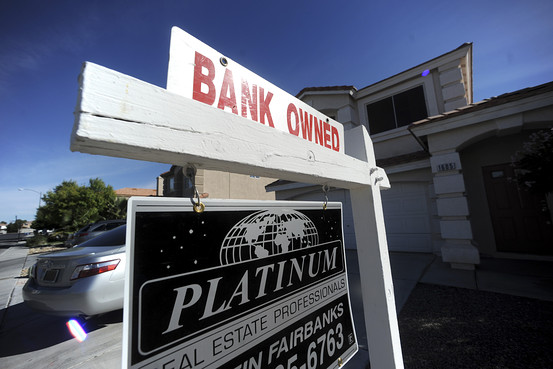 Regulators and lenders say that agreements struck this year should make it easier for more Americans to get mortgages in 2015. But one major problem that could hold lending back has yet to be addressed, according to a research paper released by the Urban Institute this week.

The problem: The cost of taking care of delinquent mortgages has gone way up and is on track to get even higher, according to the paper, authored by Laurie Goodman, center director of the Housing Finance Policy Center at Urban.

Last year, on average it cost lenders more than $2,300 per year to service a seriously delinquent mortgage, nearly five times the cost in 2008. By comparison, it cost only $156 annually in 2013 to service a performing loan.

Or to put it another way, more than half of the money spent by a typical lender to service mortgages goes to the 6.7% or so of loans that aren’t performing, according to Urban. 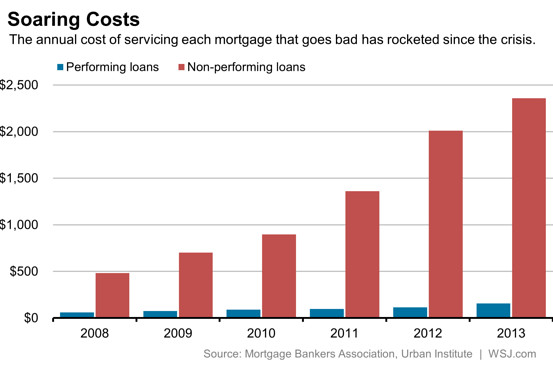 That greatly reduces the incentive for a bank to make a loan to a riskier borrower, even if the ultimate loss after a foreclosure is borne by government-backed entities, such as Fannie Mae, Freddie Mac or the Federal Housing Administration.

So what’s going on? There are several factors making mortgage servicing a hurdle to looser credit, according to Goodman.

1. It’s hard to set prices when you don’t know your costs.

In a perfect world, if the cost of servicing nonperforming loans was stable, lenders could account for the higher level and charge more to riskier borrowers. Instead, the cost is rising at an uncertain pace. So rather than guess–and risk having their profits wiped out–lenders have thus far found it easier not to make the loans at all.

Fannie, Freddie and the FHA typically want mortgages dealt with in a way that minimizes their losses. On the other hand, many state regulators and agencies such as the Consumer Financial Protection Bureau have been putting in place protections for distressed borrowers that can make it take longer to go through the foreclosure process. That conflict adds costs for servicers.

3. The companies that specialized in servicing delinquent mortgages are in trouble.

After the crisis, some companies smelled a business opportunity. If they could find a way to take care of delinquent mortgages more efficiently, they could buy the rights to service those mortgages from banks at low prices and turn a profit. However, some of those servicers, such as Ocwen Financial Corp., have run afoul of federal and state regulators, bringing the sales of those rights in some cases to a halt.

So, even though lenders and regulators appear to have reached accord in some areas–such as defining what mistakes on making loans can trigger penalties–less creditworthy borrowers might still find it difficult to get a mortgage next year.

“It would be much easier if there was one issue that you could come in and fix for credit availability to expand,” Goodman says. Instead, “it’s a whole lot of little issues that all have to be fixed.”