The Power Of Blood At The Jewish Museum: Reviewed

The Power Of Blood At The Jewish Museum: Reviewed

Blood runs through the arteries and veins of every one of us, but how much do we know actually know about it and its history? Historically, blood had immensely powerful symbolism attached to it — think of Christians imbibing wine to represent the blood of Christ, and phrases such as ‘blood ties’ and ‘blood feuds’.

This exhibition at the Jewish Museum in Camden looks at this history of the red stuff through Jewish history, from the plagues of Egypt right through to modern genetics.

It’s not a show to shy away from tackling the controversial topics, looking as it does at Tay Sach disease which is common in certain Jewish communities due to the lack of genetic diversity. We also see protesting Ethiopians at the point when Israel stopped accepting them as blood donors because they were deemed to be at a higher risk of carrying HIV. The protest banners argue that their skin may be black, but underneath, their blood is just as red, just as Jewish.

The Nazis feature too, with their ideals of promoting Aryan blood as superior. And there are displays showing how vampires were often depicted as Jewish, wearing the six-pointed star around their necks. One horrific record recalls how, in 15th century Italy, Jews were accused of being behind the disappearance of a local boy; people were tortured into confessions before being burnt at the stake.

The controversies also extend to an American Jewish magazine advising against marrying a Catholic so as not to dilute the purity of the Jewish bloodline. One hang-up: though this show does mention the impurity associated with menstruation in the Jewish faith, we were disappointed it didn’t cover the adverse reaction this triggers amongst those outside the Jewish community.

Blood is a fascinating exhibition, and though it (understandably) depicts things from a Jewish aspect, it’s absorbing enough for anyone.

Blood is on at Jewish Museum, Raymond Burton House, Albert Street, NW1 7NB until 28 February. Tickets are £7.50 for adults, (concessions available) and this grants entry to the rest of the museum.

For more north London exhibitions get a slice of West African culture at The British Library and disappear into a coloured mist at Wellcome Collection. 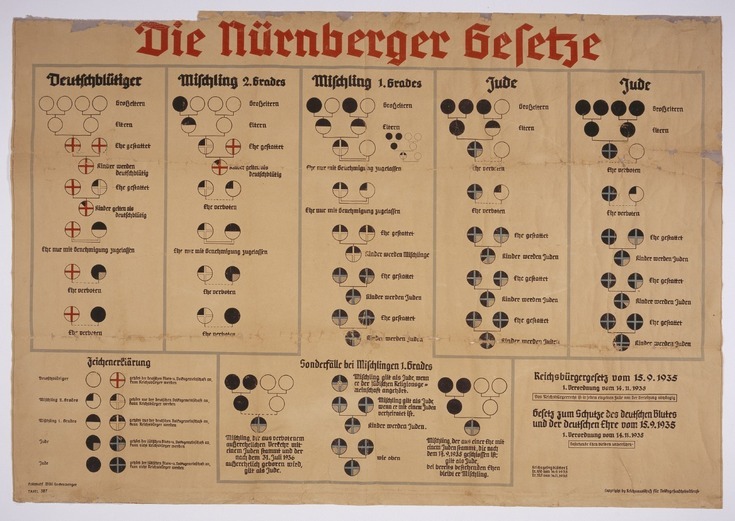 A mapping of bloodlines used by the Nazis in their policy around how only those of Aryan blood would receive full rights. Copyright Holocaust Memorial Museum

A mapping of bloodlines used by the Nazis in their policy around how only those of Aryan blood would receive full rights. Copyright Holocaust Memorial Museum
The blood of Christ pours into a chalice in this sculpture. Copyright V&A.
The circumcision of Jesus as a baby. Copyright Suermont Ludwig Museum, Photo by Anne Gold.
A board for ensuring all blood is drained from Kosher meat. Copyright Jewish Museum