The realities of living near coal ash : TreeHugger

Written by Kim Brewer, a mother-turned-advocate for strong and enforceable coal ash regulations. She lives in North Carolina. That’s her pictured above, with her daughters Laney and Ava.

Imagine spending your holidays in the hospital with a sick child. Imagine having to kiss your scared child goodbye before her thirteenth surgery, trying to be strong for her but knowing it won’t be her last operation. Imagine living in a town where other families are coping with raising children with neurological birth defects, not knowing what’s causing them or how to keep your family safe.

I am a mother of four, and I don’t have to imagine. This is the reality that my family lives every day.

My older son and daughter were born perfectly healthy. After moving to Dukeville, North Carolina, our family grew by two daughters, each with severe birth defects. My daughter Ava, now five, was born with chiari malformation, a brain defect that can be caused either by genetic mutation or exposure to toxic chemicals. A genetic counselor was able to rule out genetics as the cause. My youngest daughter, Laney, was born with spina bifida, which can also be caused by environmental factors. Both my younger daughters have also been diagnosed with epilepsy.

My family lives near the Buck Steam Station coal ash ponds in Rowan County. We never thought of the coal ash ponds as an issue, until the Dan River spill earlier this year — that’s part of the Dan River coal ash spill in the photo below. Our community started to learn about the dangers of coal ash when the Dan River spill happened. Each year in the United States, coal-fired plants produce 140 million tons of hazardous solid waste, known as coal ash. This waste is stored in 45 states and in more than 1,400 sites, like the three unlined coal ash pits in my former neighborhood. 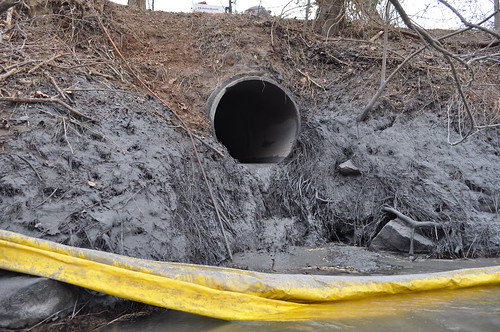 When coal ash spills or leaches into nearby groundwater or waterways, the toxins it contains pose serious health risks to nearby communities. The U.S. Environmental Protection Agency has found that living within one mile of a coal ash pit makes your lifetime risk of cancer far higher than smoking a pack of cigarettes a day.

Along with hexavalent chromium, coal ash contains arsenic, lead, mercury, and selenium, as well as aluminum, barium, boron, chlorine, and even thallium, which is also found in rat poison. These toxins can cause cancer, heart damage, lung disease, respiratory distress, kidney disease, reproductive problems, gastrointestinal illness, birth defects, and impaired bone growth in children. In short, coal ash toxins have the potential to damage every one of our major organ systems.

All of this came to light for us when a neighbor found what he believed was coal ash waste that had seeped onto his property. Fourteen wells in the neighborhood were tested and found to have concerning levels of hexavalent chromium, a toxic substance made infamous by environmental crusader Erin Brockovich and the film about her. During a routine test, doctors found Ava also had high levels of lead in her blood.

It’s been years, and still we don’t know why my children or other children in our community are sick. We’re surrounded by toxic substances, and it isn’t right. No family should have to go through what we’ve been through and will continue to go through.

Shockingly, there are currently no federal standards for the storage and disposal of coal ash to protect communities and waterways from coal ash pollution. No national standards exist for monitoring groundwater or reporting coal ash integrity or pollution, even though the EPA has confirmed water contamination from every state where coal ash is stored, more than 200 cases total. However, the EPA is set to finalize standards for the first time ever this Friday, December 19.

More than one and a half million American children live near coal ash pits or dumps. We can begin to put an end to the danger and keep our children safe, if the EPA creates strong federal standards for the disposal of coal ash, which it is charged with doing this week. As parents, it’s our job to do everything we can to keep our kids safe and healthy. In the case of coal ash, we need the EPA’s help in doing so.