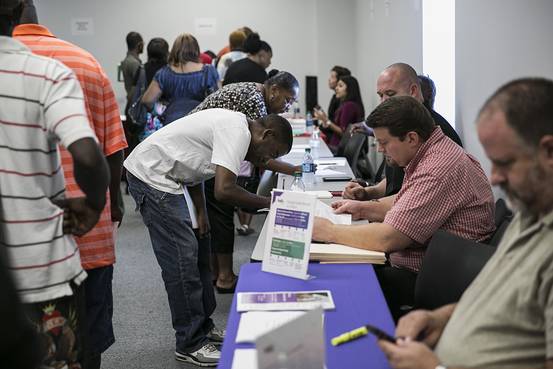 Job seekers fill out paperwork at booths during a weekly job fair in Dallas in September.
LAURA BUCKMAN/BLOOMBERG NEWS

The U.S. economy added 142,000 jobs in September, but there’s more to the monthly jobs report than the number of jobs added. The report provides a wealth of information about the demographics of unemployment—about who is unemployed and why—summarized in the following 11 charts.

Over the past three months the economy has added jobs at the slowest pace since February 2014. Employers were adding an average of more than 200,000 jobs each month since the spring of last year, but now that pace has slowed. 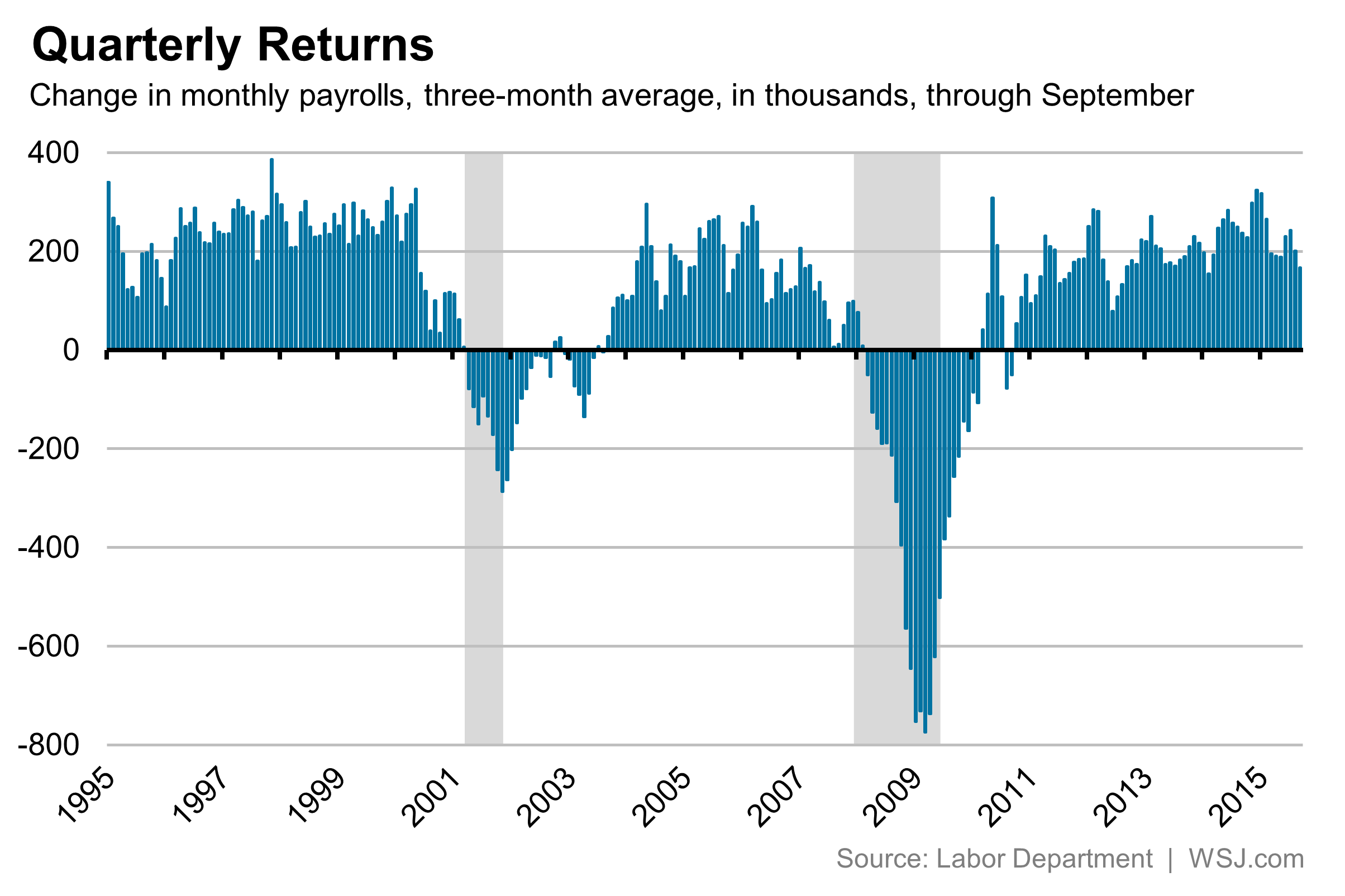 Similarly, the annual pace of job creation has eased in recent months after peaking above three million late last year. 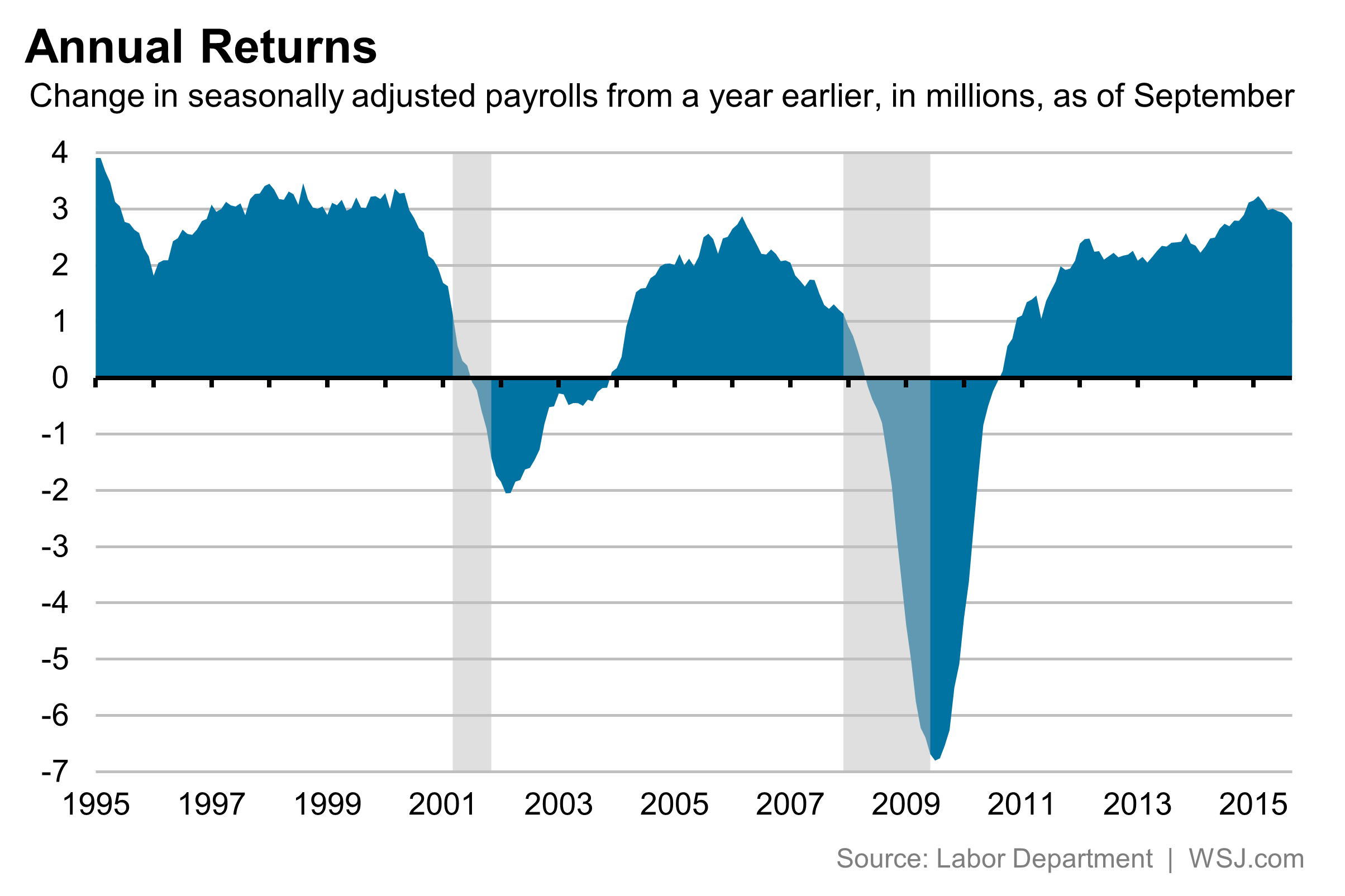 As a result of the weaker gains in August and September, job creation in 2015 has fallen well off last year’s pace. However, the economy is still on track to post the second-best year for employment growth in the past decade. 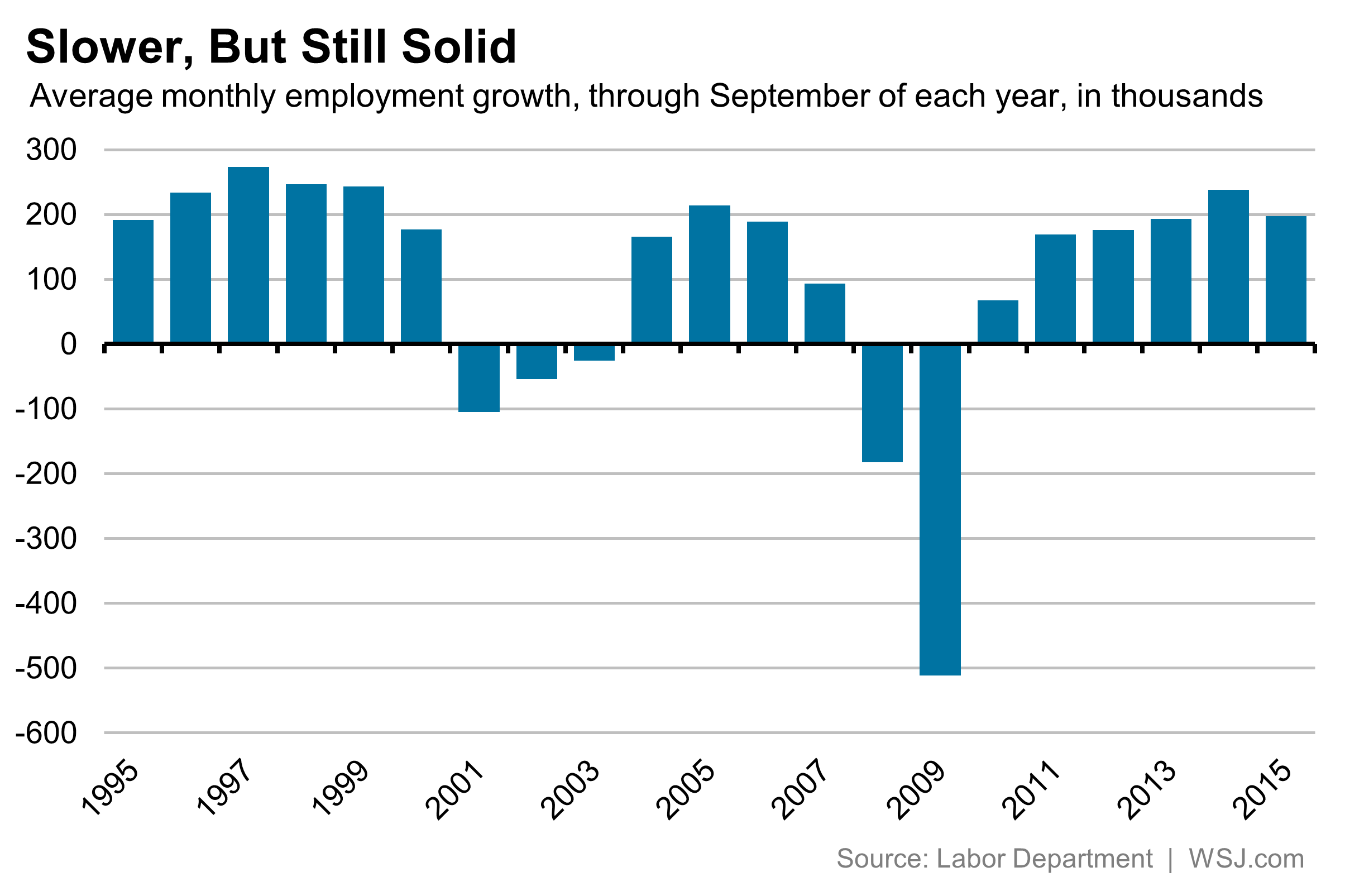 Every measure of unemployment is declining this year. The broadest gauge, which includes part-timers who would prefer full-time employment and Americans too discouraged to look for a job, fell to 10% last month. That’s the lowest rate since May 2008. 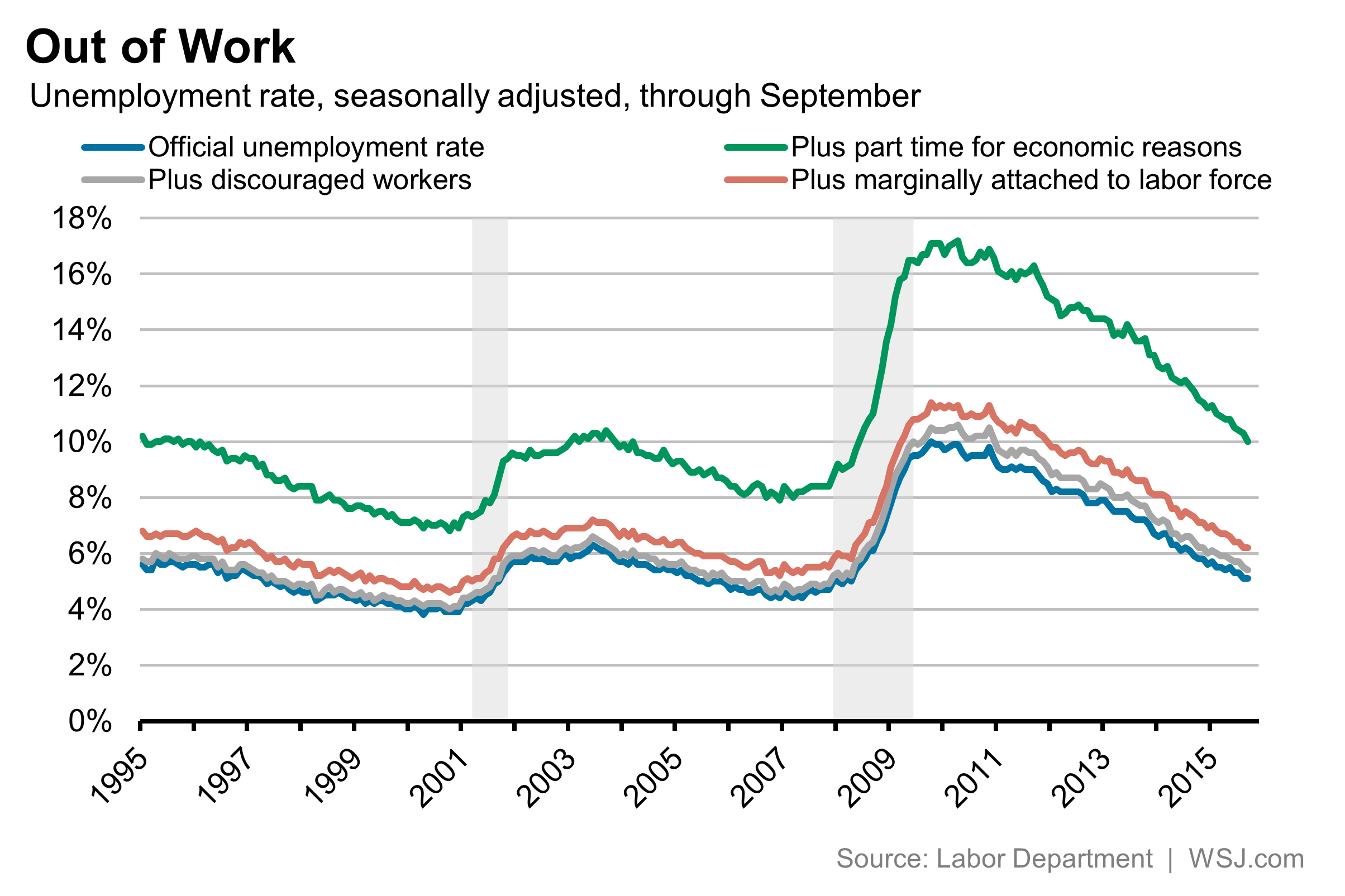 The median unemployed worker has been without a job for 11.4 weeks. That’s substantially shorter than during the first few years of this economic recovery, but still high by historical standards. 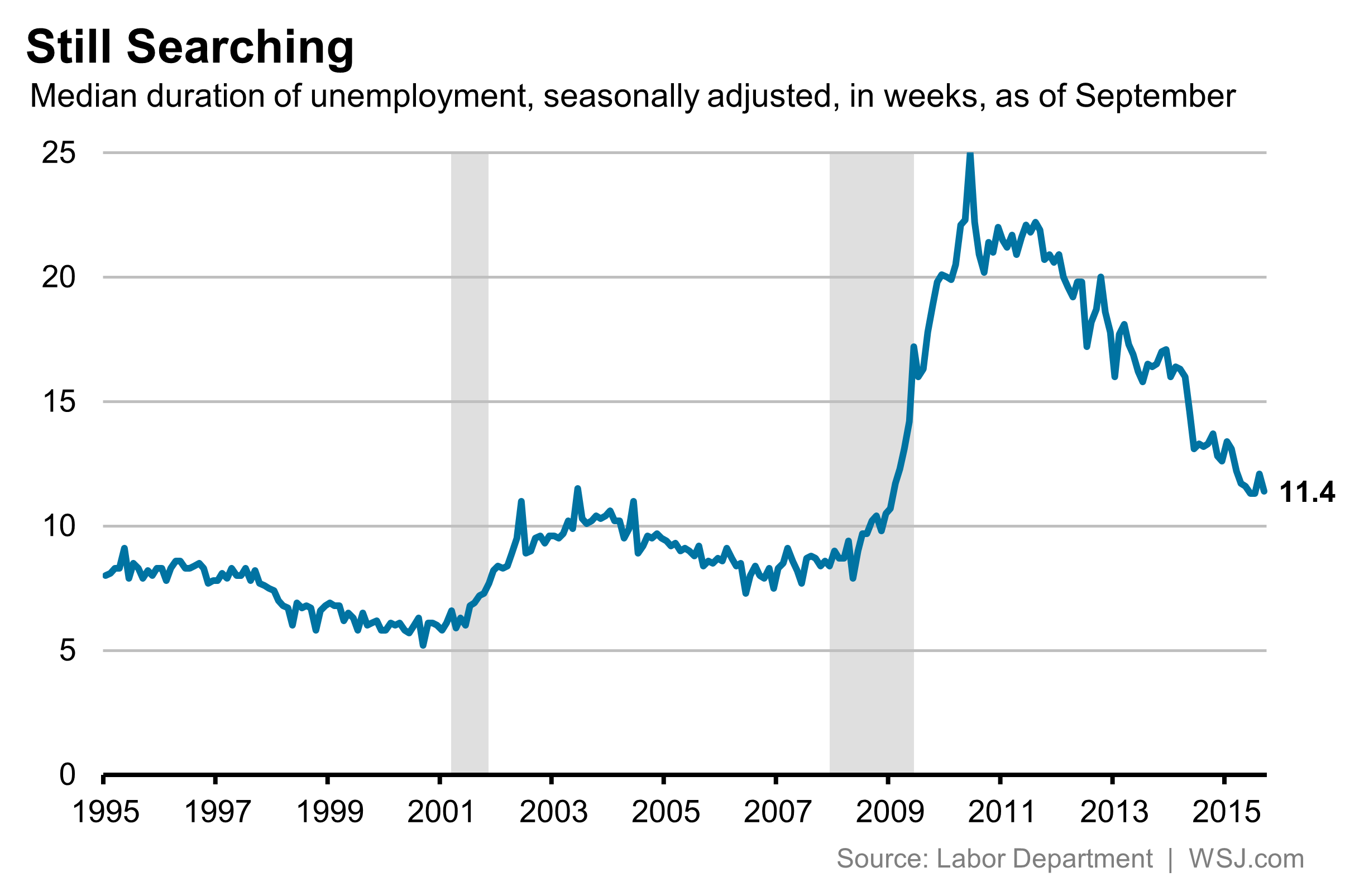 The number of Americans working full-time has finally returned to its prerecession levels, though this doesn’t account for an increase in the overall population. 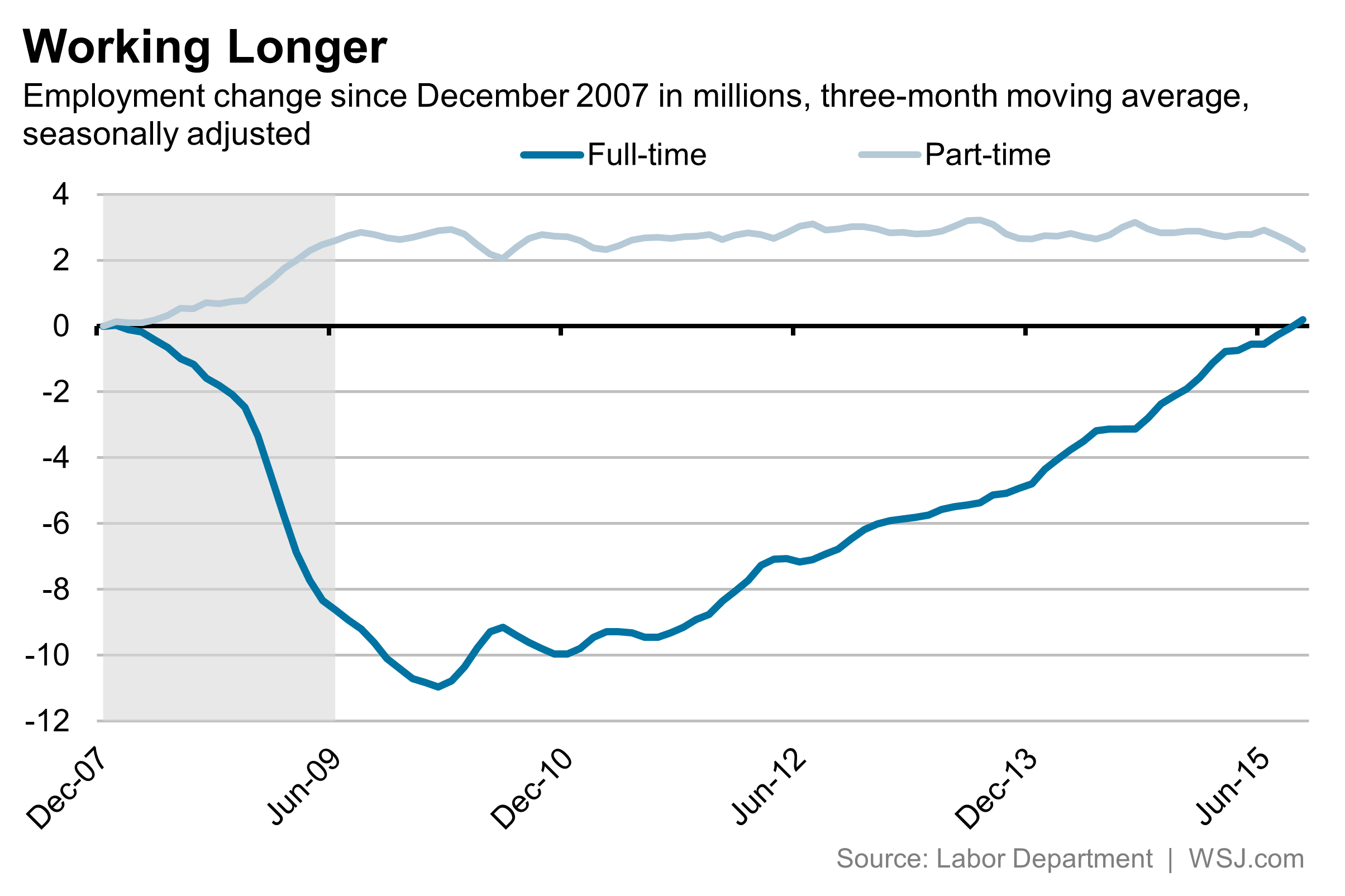 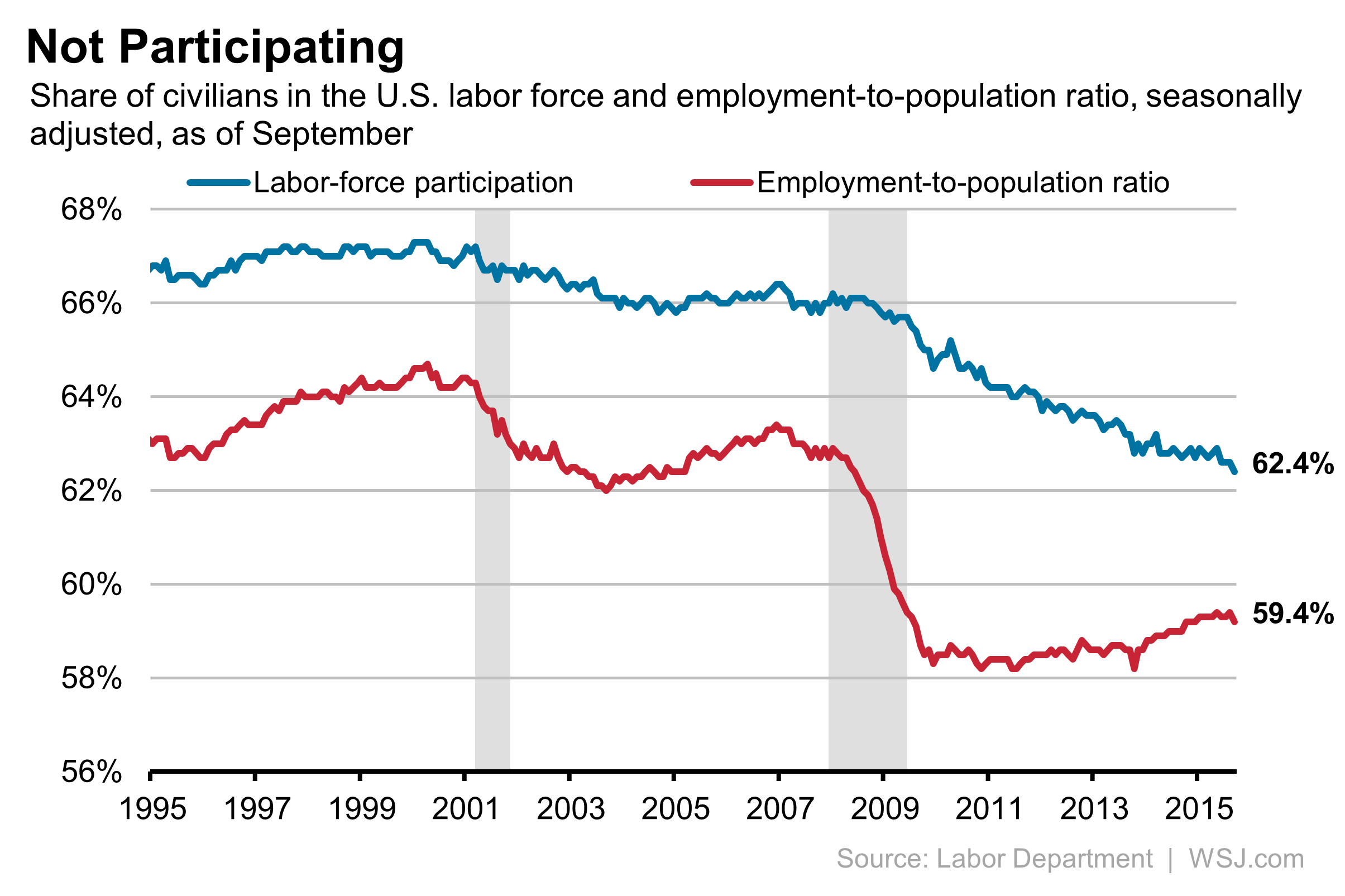 Much of the reason for the decline in the labor force is simply that a growing number of baby boomers are choosing to retire. Among workers ages 25 to 54, labor-force participation and employment rates are higher. Among this group of workers, dubbed prime-age by labor market economists, labor-force participation fell to 80.6% from 80.7% last month. 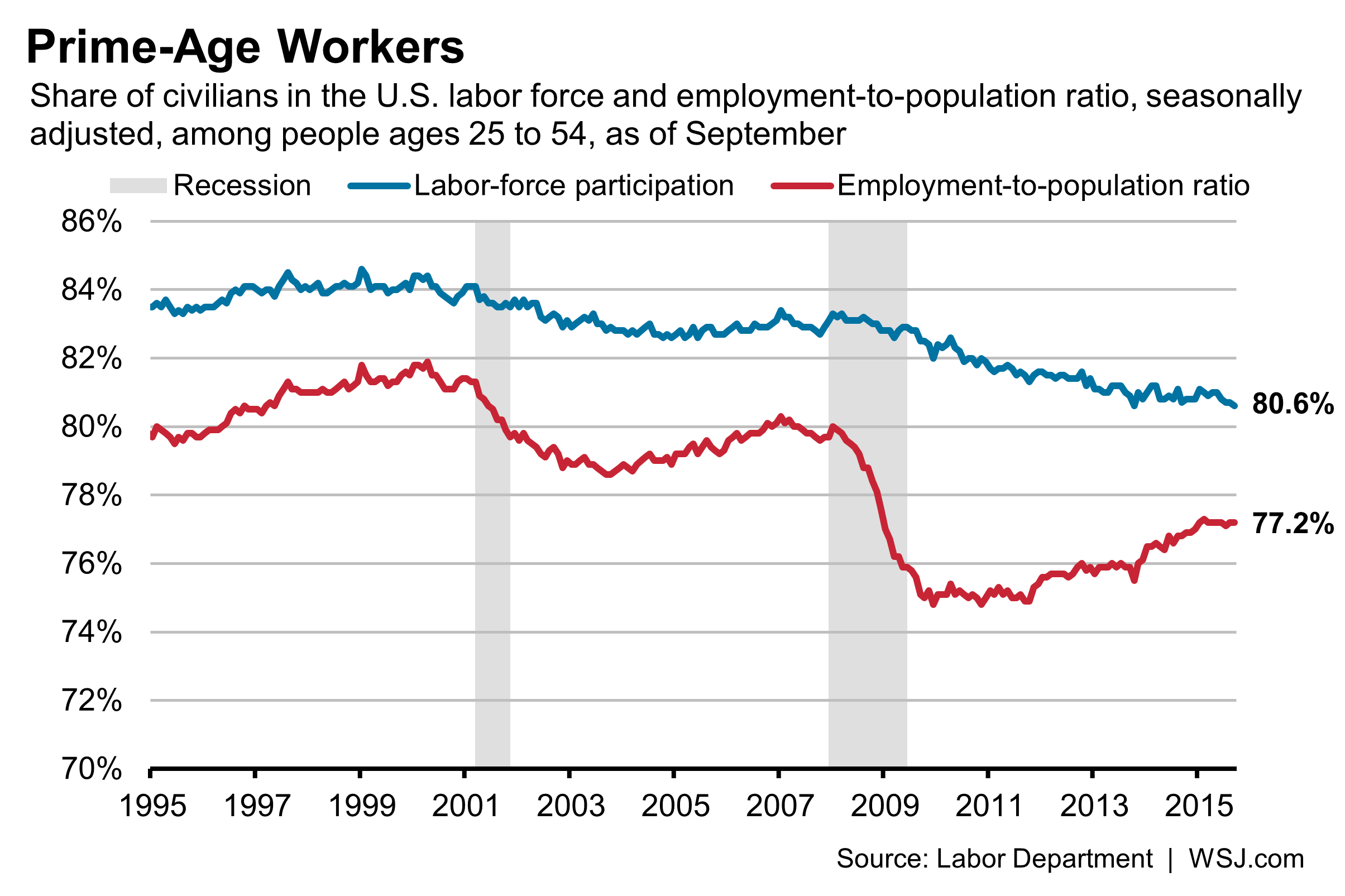 People can be unemployed for a range of reasons—whether it’s entering the job market for the first time; re-entering after going to school, starting a family or caring for a relative; quitting an old job with no new one lined up; or losing a job, either on a temporary layoff or permanently. As the recovery has progressed, the share of the unemployed who lost their previous job has declined. A growing share of the unemployed are new entrant or re-entrants to the work force. 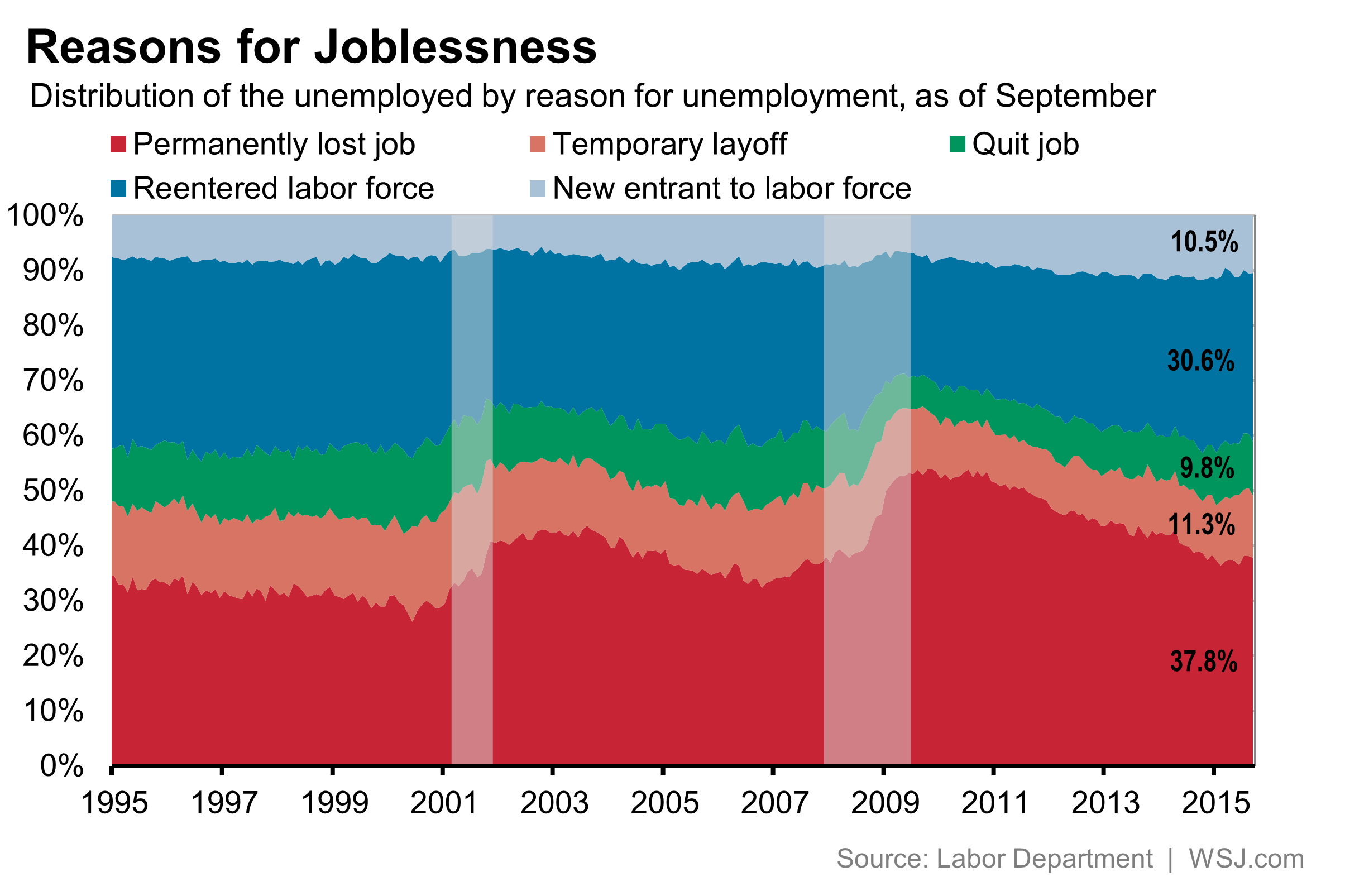 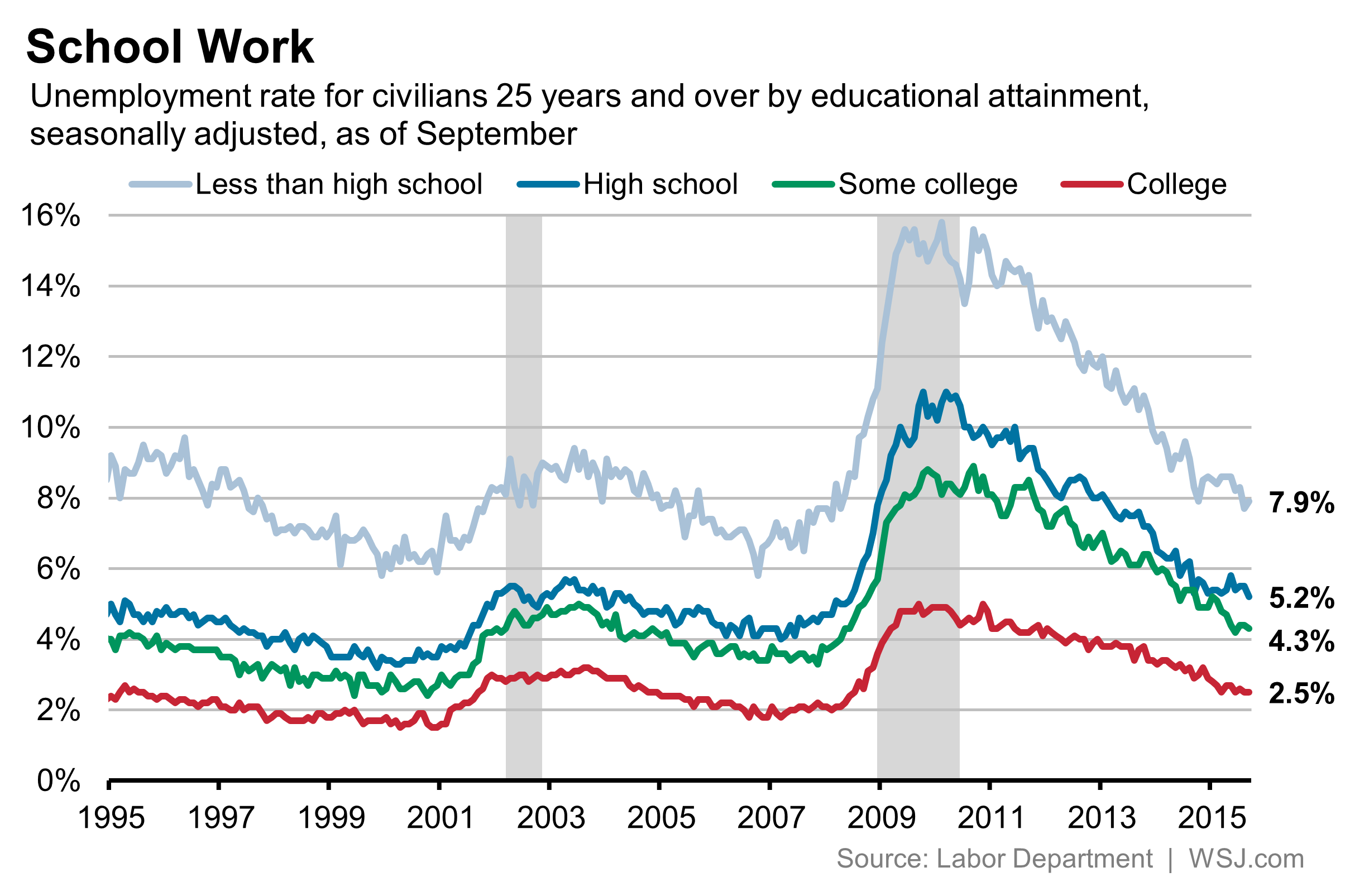 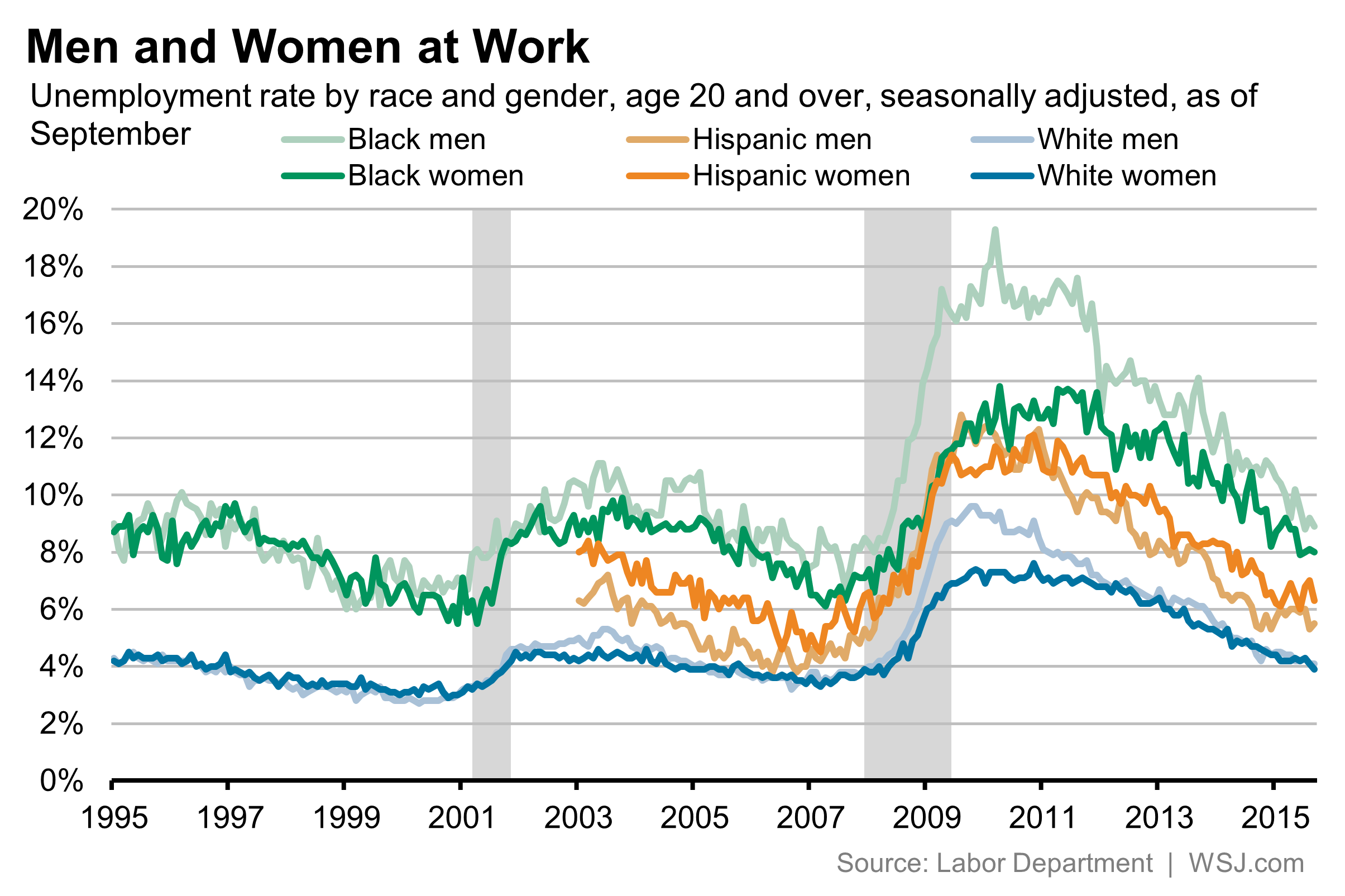 Monthly employment gains in 2015 have averaged 198,000. An earlier version of the chart “Slower, But Still Solid,” incorrectly showed an average gain of 221,000 jobs. Also, the number of Americans working full-time increased in September using a three-month moving average. An earlier version of the chart “Working Longer” included data for July, August and September that didn’t use the three-month average, while the post incorrectly suggested the number of full-time workers according to that measure had declined in September. (Oct. 2, 2015)

Myth or Fact? How Some Jobs-Report Analysis Goes Wrong

5 Things to Watch in the September Jobs Report