The U.S. Goes From Big to Still Bigger on the New Home Front – Real Time Economics

The new-home market’s shift to pricier homes resulted last year in the average newly built home getting larger still, with more including trappings of affluence such as four or more bedrooms and three-car garages.

U.S. Census Bureau data released Monday show the percentage of U.S. homes built last year with at least four bedrooms increased to 44%, up from 41% in 2012. Last year’s percentage was the highest for new homes with four bedrooms or more since Census began tracking the figures in 1973.

Also reaching a new high was the percentage of homes built last year with at least three bathrooms, which increased to 33% from 30% in 2012. Last year’s percentage is the highest since Census started tracking the three-or-more category of bathrooms in 1987. 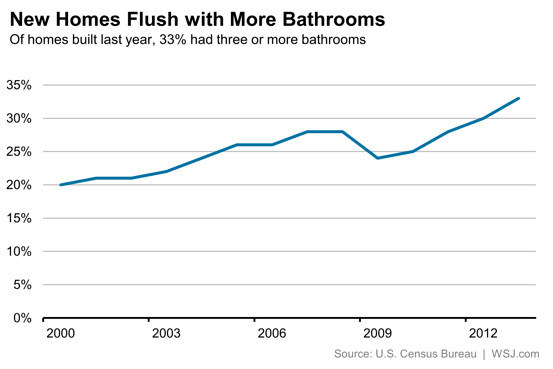 The market’s shift to bigger homes with more amenities is a product of builders catering more to better-heeled buyers searching for their second- or third-generation homes. Those move-up buyers have accounted for more home purchases than usual since the downturn as first-time and entry-level buyers remain sidelined by tepid wage growth and stringent mortgage-qualification standards.

That narrower focus has resulted in construction of fewer — but more expensive — homes. U.S. sales of new homes are running at a pace so far this year of roughly 60% of their annual average since 2000. Meanwhile, the median price of a new home reached $268,900 last year, the highest annual median since Census began tracking the figures in 1963.

“There are the haves and the have-nots,” said Brad Hunter, chief economist for housing market consulting firm Metrostudy, a subsidiary of Hanley Wood LLC. “Those who are buying homes happen to be the people who have money, savings in the bank and have good credit scores.”

In addition to including more extras, new homes simply continue to get larger. The median size of a newly built home came in at 2,384 square feet last year, up 3.4% from 2012. The figure has increased each year since 2009. The trend continued in this year’s first quarter. 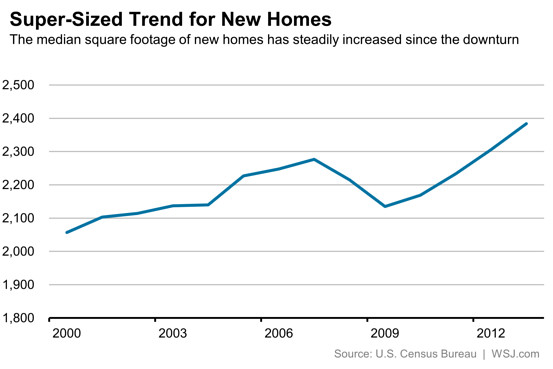 “They know what they want, and they can afford it right now,” said John Johnson, Weekley’s chief executive, of move-up buyers. “So they’re tricking out their houses. They’re putting all kinds of upgrades in – the nice cabinets, the spa-type tubs in the master bathroom.”

The larger homes accommodate more cars, too. The percentage of homes built last year with a garage for at least three cars increased to 21% from 19% in 2012. The latest figure is the highest annual percentage since Census began tracking three-car garages in 1992.

One measure that surprised Stephen Melman, director of economic services in the National Association of Home Builders’ economics and housing policy group, was a decline in the percentage of single-story homes built last year. That measure fell to 41% from 44% in 2012 while the percentage of two-story homes increased to 54% from 52%.

“Baby Boomers, because they’re empty nesters, don’t need as many bedrooms or a yard,” Mr. Melman said. “I thought the share of one-story homes would increase.”

It might be that pressure from high land prices outweighed demand from Baby Boomers last year. Builders often build multistory homes to get as much square footage as possible onto small lots.

Brad Hutchins and his wife contributed to the trend of larger new homes last year. The couple, represented by Realtor Christina Kang of Century 21 Judge Fite Co., purchased a 4,711-square-foot, five-bedroom home near Dallas for $335,000 in June 2013. They bought the new home after selling their former home of 22 years, which was less than half the size, in nearby Arlington, Texas.

The Hutchins’s new home includes a media room, a game room, a study and a room for Ms. Hutchins’ genealogy hobby. “The idea of being able to entertain or have family come to stay were big parts of the driving factor of having a larger home,” said Mr. Hutchins, a 54-year-old private banker.