The U.S. trade deficit excluding oil hit a record high in January, according to the latest Commerce Department data. 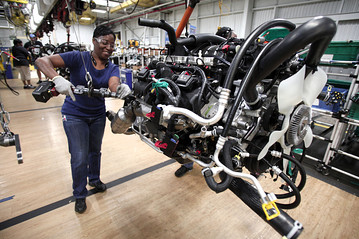 A Chrysler Ram 1500 truck goes through a quality control check at a plant in Warren, Mich.
Getty Images

Does it really matter? Yes, because of what it says about the health of the U.S. and its major trading partners.

Oil’s share of the trade deficit has fallen as domestic production expanded and prices plummeted. If prices rise, cheap oil fuels more consumption or domestic output is priced out of the market, crude oil’s contribution to the deficit could rebound.

Meanwhile, the trade gap in other goods and services has swelled.

A robust dollar and a strengthening economy are giving Americans more buying power, especially for products made overseas, boosting the tab for imports. At the same time, growth in Europe and Japan is lackluster and output in several major emerging markets is cooling, undercutting demand for U.S. products abroad. Combined, those dynamics are broadening the non-oil U.S. trade deficit.

Exports of industrial supplies are picking up, largely driven by petroleum exports. International sales of capital goods—the products companies invest in to expand their businesses–have shown some improvement, but that trend isn’t nearly as strong. Other export categories show much tamer expansions.

Why does this matter? Because the share of total exports as a share of gross domestic product has steadily grown. Export stagnation would undermine growth, one reason the Federal Reserve is looking at growth trends abroad as it mulls when to raise interest rates. Export expansion has also been a key plank of President Barack Obama‘s economic strategy.

Still, amid the growing political fight over U.S. trade legislation, it’s worth noting that the trade deficit as a share of GDP hasn’t yet approached pre-crisis levels. But it exceeds levels seen during the dollar-surge of the early 1980s.

And does running a deficit really matter? Many economists say a modest trade deficit isn’t necessarily a bad thing. Rather, it can reflect underlying weaknesses in economies that can build and turn into major economic problems.

Simply put, a deficit means a country is spending more than it’s saving. That’s not a problem if borrowing yields stronger growth. But if those investments aren’t more productive than borrowing costs, then those debts can overwhelm a country.

And since borrowing costs are extremely low and the economy is strengthening, that’s not really a problem for the U.S.–right now.

How the U.S. Oil Boom Is Altering the Trade Deficit

How Oil Prices Could Help a Dollar-Damaged U.S. Trade Deficit