The U.S. unemployment rate increased slightly to 6.2% in July and a broader rate that includes discouraged workers also ticked up to 12.2%, but don’t be discouraged. Those numbers rose mostly for the right reason. 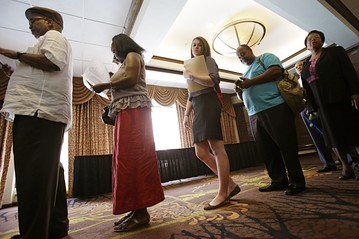 It looks like people who gave up during the recession and slow recovery are encouraged by recent gains and are coming back into the labor force. Last month, the Journal noted that economists have been expecting this trend to take hold, but too often they have been wrong. One month’s move isn’t enough to declare the wounds of the recession are healed, but after some stagnation earlier this year, the numbers suggest movement in the right direction.

It can be hard to tell the reasons why the number of unemployed rise, since it’s a net number that takes into account millions of people moving through the labor force every month. But the indications are generally positive. More of the newly unemployed came from out of the labor force than from the ranks of the employed. There also was a rise in the number of people unemployed for more than six months, indicating some of the long-term unemployed may have come back into the labor market.

Separately, the broader measure of unemployment, known as the “U-6″ for its data classification by the Labor Department, looks like it also rose for the right reasons. That rate includes everyone in the official rate plus “marginally attached workers” — those who are neither working nor looking for work, but say they want a job and have looked for work recently; and people who are employed part-time for economic reasons, meaning they want full-time work but took a part-time schedule instead because that’s all they could find. The rate rose even though there were fewer part-time workers who wanted full-time jobs. Meanwhile, the ranks of the marginally attached workers is below year-earlier levels.

The difference in improvement is due to people giving up and leaving the labor force. The employment rate for prime age workers ticked down slightly in July, but it has been improving more quickly this year overall and is up 0.6 percentage point from July 2013. Even though the decline in the jobless rate still is faster than the increase in the employment rate, the lines are moving in the right direction.