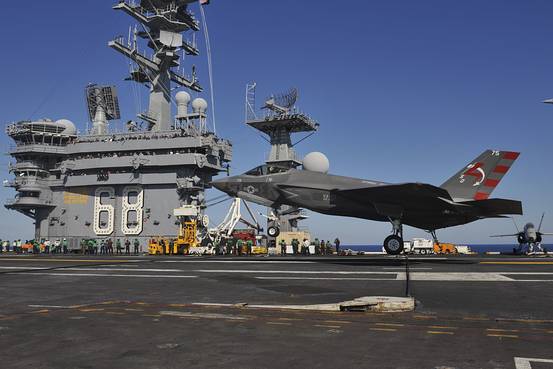 Government data on economic output was revised for the past three years in part due to a new accounting of military spending.
KELLY M. AGEE/U.S. NAVY VIA GETTY IMAGES

The economic expansion—already the worst on record since World War II—is weaker than previously thought, according to newly revised data.

From 2012 through 2014, the economy grew at an all-too-familiar rate of 2% annually, according to three years of revised figures the Commerce Department released Thursday. That’s a 0.3 percentage point downgrade from prior estimates.

The revisions were released concurrently with the government’s first estimate of second-quarter output.

Since the recession ended in June 2009, the economy has advanced at a 2.2% annual pace through the end of last year. That’s more than a half-percentage point worse than the next-weakest expansion of the past 70 years, the one from 2001 through 2007. While there have been highs and lows in individual quarters, overall the economy has failed to break out of its roughly 2% pattern for six years. 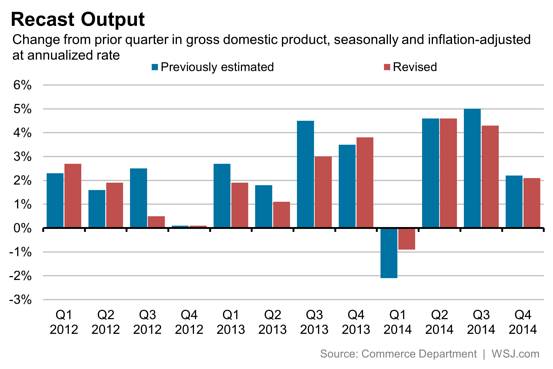 The latest revision, however, did significantly upgrade what was seen as a historically wretched winter of 2014.

The upward revision to the first quarter of 2014 was largely due to revised data on construction spending, specifically on power structures. The revision reflected both new seasonal adjustments and newly available data.

That 2011 figure, and other data, could be revised in future years. Commerce Department officials are undertaking a comprehensive review of GDP data with the intent of refining the seasonal adjustment process. 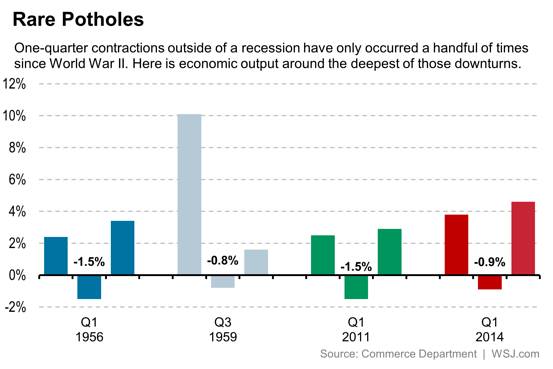 In recent years, output figures have tended to be weaker in the first quarter and stronger in the third quarter. That’s raised concern among some economists. The government seasonally adjusts most economic data so observers can see underlying changes rather than expected patterns, such as weaker consumer spending in the months after Christmas or more construction during the summer.

Commerce Department economists said this week they took a first step toward addressing so-called residual seasonality in the latest revisions. But a more comprehensive review, set to begin this fall, could result in more adjustments over a longer period of time.

The Commerce Department also is applying a new seasonal methodology for tracking how much consumers spend on services. Previously it used a four-quarter moving average for some data from the Quarterly Services Survey. Now the department is seasonally adjusting more quarterly data.

Economists React to Second-Quarter GDP: ‘By No Means Satisfying’