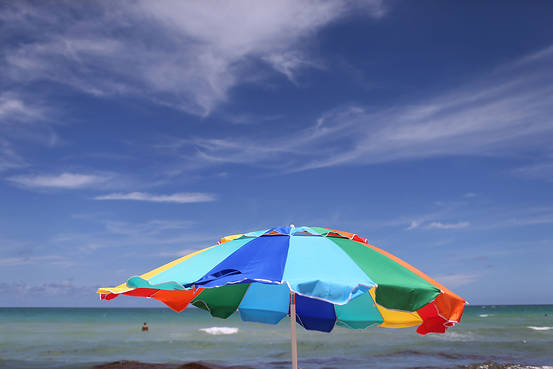 When U.S. travelers spend abroad, that’s counted as an import. When nonresidents spend in the U.S., that’s an export, as in Miami Beach in August. Travel exports are up about 1.1% through the first nine months of the year.
JOE RAEDLE/GETTY IMAGES

Exports of U.S. services hit new records in August and September, a sign the sector hasn’t been as weighed down by a strong dollar and tepid demand for American goods.

U.S. service exports climbed to $60.6 billion in September, the Commerce Department said Wednesday. Even adjusted for inflation, the latest figure remains a record.

By contrast, September’s exports of goods were down 8% from a July 2014 peak. Even a small rebound in September exports did little to change a gloomy outlook for American factories. 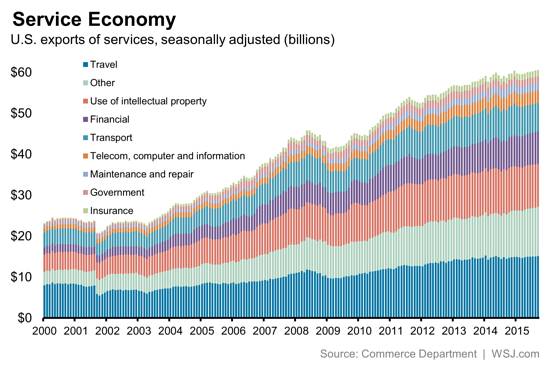 The latest figures suggest the service sector remains resilient, a finding echoed in other data released on Wednesday. The Institute for Supply Management’s nonmanufacturing purchasing-managers index rose to 59.1 in October from 56.9 in September.

The service sector is a key component of the economy. Consumer spending on services–housing, health care, transportation, recreation, entertainment and the like–is twice the spending on goods.

“I think the issue is how the dollar affects the two components–the dollar effect is less severe on the services side,” said Gregory Daco, head of U.S. macroeconomics at Oxford Economics.

Mr. Daco points to big components of the service sector, such as travel. Business and personal travel account for about one-third of all service exports. While business travelers and tourists may have to watch their budgets more carefully, they evidently aren’t canceling many trips to the U.S. Travel exports are up about 1.1% through the first nine months of the year. (When U.S. travelers spend abroad, that’s counted as an import. When nonresidents spend in the U.S., that’s an export.)

American intellectual property–such as the use of patents, trademarks and distribution licenses–financial services and “other” services such as consulting or research and development are other big generators of foreign sales. 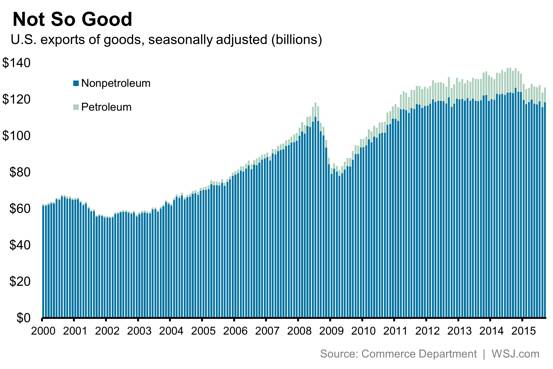 Spending on U.S. Travel and Tourism Speeds Up Despite Stronger Dollar