This weekend’s Things To Do In London, sponsored by I Love The 90s Party.

ALL THAT JAZZ SUMMER WEEKENDER:
Curzon cinemas in Bloomsbury is hosting a weekend dedicated to jazz. Catch screenings of classic jazz films and hear rare recorded jazz performances. On Saturday there’s a screening of Jean Luc-Godard’s iconic 1960 film of French New Wave Cinema, Breathless. On Sunday you can hear a discussion on the seminal year for the explosion of jazz, 1959. £8/£12.50/£15, prebook, 1-2 August

COMMUNITY HAYSTACKS:
Discover the skill and history of stacking hay this weekend as Walthamstow Marshes becomes the setting for a two day hay harvest community event with scything workshops, haystack building and a public talk about the history of land cultivation. Take your own picnic on Sunday and join an informative tour of the marshes. Free, just turn up, 1-2 August

FIRST WORLD WAR PLANE WORKSHOP:
The Royal Air Force Museum in Colindale holds Airfix Make and Take morning and afternoon sessions where you can make your own First World War aircraft to decorate and take home. Appropriate for age 7+, £3, just turn up, until 7 August

RICHMIX YOUTH TAKEOVER:
A 22 day festival is at Rich Mix, supporting young people and showcasing emerging talent through performance, music, masterclasses and networking. This weekend there’s a Q&A about jobs in the arts industry, Edinburgh Fringe previews and an opening party. Free, just turn up, until 22 August

RIVER STAGE:
It’s week two of performances, theatre and family friendly events held at the River Stage outside The National Theatre. Saturday there’s an interactive installation plus music provided by The Swing Ninjas. Sunday the whole family can enjoy lunchtime circus from Bench. Free, just turn up, until 30 August

JUDITH KERR EXHIBITION:
Little ones will love this charming exhibition at the Jewish Museum in Camden, in which they can have Tea with Tiger and curl up in Mog’s basket. Take advantage of the 2-4-1 offer on tickets and under fives go free. £6.50, prebook, 10am

PLAZA LATINA:
Nursery Row Park in Elephant and Castle will be celebrating all things Latin American over the first three Saturdays of August. Music, Colombian dance and craft will keep all the family entertained. Fill your face with authentic Latin American dishes washed down with Latin beer. Free, just turn up, noon-7pm

AUGUST IN AFRICA SUMMER FESTIVAL:
The Africa Centre in Covent Garden is celebrating African culture with a rich programme made up of musicians, authentic African food, art, photography and a fashion show. Free, just turn up, noon-10pm

HAINGEY IS 50:
Celebrate Haringey’s 50th birthday in Bruce Castle Park with a full programme of dance, food, music and entertainment. Try out sports for free and see the talent Haringey has to offer. Free, just turn up, noon-6pm

CITYDASH:
London literally becomes an adult playground as you rush around overcoming challenges and solving clues. Begin at the Mulberry Bush on the South Bank. A great way to meet fellow adventurous Londoners and get your daily exercise. £15, prebook, 2pm

STREET ART TREASURE HUNT:
The Chocolate Museum in Brixton shakes up the usual street art tours with puzzle clues and photo challenges. Collect clue packs and plan your route around Brixton. The three hour tour ends with prizes and a well deserved pint at a nearby pub. £15, prebook, 2pm

ALL YOU CAN EAT BBQ:
Head to The Jetty Bar  in North Greenwich for an all you can eat BBQ, a drink and unlimited salad. Admittedly we aren’t too excited for unlimited salad but there’s a cocktail bar to make up for that. You get two hours to stuff your face and you can only redeem your meal at the time stated on the ticket. £15, prebook, 2pm-9pm

ANIMAL SCIENCE AT FOYLES:
Head to Foyles in Charing Cross to hear former presenter of the BBC’s The Really Wild Show, trained zoologist and author Nicola Davies, chat all things weird and wonderful from the world of nature to inspire any child’s curiosity. Nicola offers an eye-opening introduction to the science of animals and tells stories of her own thrilling encounters with creatures great and small. £3, prebook, 2pm-3pm

PIZZA TASTING TOUR:
Lovers of pizza will thank us for telling them about this tour which takes you around London’s finest pizzerias. Learn about the history of how this doughy goodness came to London. Five tastings take place in a secret location. £25, prebook, 2.15pm

JAMES BOND TOUR:
Bond enthusiasts can revisit some of the most iconic moments in James Bond movie history by visiting actual London locations. Meet at Barbican Station and visit the headquarters of MI6 in Skyfall and Quantum of Solace and much more. £10, prebook, 3pm

TAPAS:
We might not be heading to Barcelona this summer but we don’t need to when we can enjoy tapas and rose for two on a sun terrace at Angelus Restaurant in Bayswater. (Providing the sun comes out.) £19, prebook, 4pm

RETRO PARTY:
The ultimate retro party I love the 80s vs I love the 90s takes place every Saturday night at The Jazz Cafe in Camden. Which decade do you prefer? Show off your love while you hit the dance floor. £5 before 11.30pm/£7 afterwards, prebook, until 3am

MUSIC:
Spend the evening at Southbank Centre’s Royal Festival Hall listening to acoustic folk quintet Punch Brothers who are performing tracks from their new album, The Phosphorescent Blues. Punch Brothers have featured on the soundtrack to the Coen brothers’ film Inside Llewyn Davis, as well as on the soundtrack to Hollywood blockbuster The Hunger Games. Support comes from Rachel Sermanni. £22.50/£20, prebook, 7.30pm

JAZZ ON THE LAWN:
Spend an sunny evening (fingers crossed) listening to jazz at Fulham Palace, on the bill tonight is Kevin Fitzsimmons. £15, prebook, 7.30pm

SUNSET CRUISE:
Spend the night on Westminster Pier who is throwing not one but two summer parties with top DJs till late. If a party on the Thames wasn’t enough to entice you maybe the offer of a free drink with the ticket will. £15, prebook, 8pm

OUTDOOR SCREENING:
Pop-up cinema has come to Bishop’s Gate in Fulham. Tonight enjoy romcom Pretty Woman. There’s a fully stocked bar and burgers provided or snuggle up with your own picnic. £8.50, prebook, 9.15pm

JAZZ:
Tonight talented singer Heidi Vogel will be impressing audiences at Brasserie Toulouse Lautrec in Kennington. She has toured internationally and ended the year with a sell out show at The Royal Albert Hall. Dress code is smart/casual. £7, prebook, 9.30pm

VINTAGE KILO SALE:
Head to York Hall in Bethnal Green to pick up a vintage bargain; choose from hundreds of items which are then priced by weight. £1.50/£3, just turn up, 11am-4pm

VOICE MAP AUDIO TOUR:
Meet at The Apple Store in Covent Garden before being led on an alternative history tour where the guide speaks to you through your head phones. The tour with travel writer Joey Leskin lasts for an hour and a half before a pub stop. £1.50, just turn up, 11.30am

BOTTOMLESS BRUNCH:
Maida Hill Place in Paddington will be satisfying your brunch craving and curing that hangover with their tantalising menu which features lavender French toast and maple cured smoked bacon. £19.95, prebook, 11.30am

MANUOSH KNITTING:
Learn how to knit with only the finest wool provided by luxury New York knitting brand Manuosh. In this session at Drink, Shop and Do in King’s Cross you’ll get to make a gorgeous Merino wool clutch bag. £40, prebook, 1pm

FAULTY TOWERS DINING EXPERIENCE:
Torquay Suite Theatre in Charing Cross serves up an entertaining mix of food and farce. Join Basil, Sybil and Manuel on this this improvised dining experience where anything could happen. £50, prebook, 1.30pm

CLASSIC FILMS:
The Phoenix Cinema is reserving Sunday afternoons for the screening of classic films. The first two Sundays are dedicated to Italy in Focus. This afternoon you can see The Bicycle Thieves. £9.50, prebook, 2pm

FARM FUNDRAISING EVENT:
This singles event is to raise money for Stepney City Farm. Meet like-minded people, enjoy home-made cake and muck in with the farm work. End the day with Speed Field Dating — a chance to solidify those friendships you’ve built up over the course of the day. £15, prebook, 2.30pm

BABY DISCO:
Does your baby love to boogie? Take under fives along to Spiegeltent on the South Bank for an afternoon of busting moves and singing tunes. £5, prebook, 3pm

ROOM ESCAPE ADVENTURES:
Spend the afternoon trapped in a room somewhere in Whitechapel with 11 other mortals and a zombie. Use your cunning to solve riddles and clues which will help you escape. £28, prebook, 6pm

TOP SECRET COMEDY:
OK, it might not be so secret but it sure is funny. Head to Top Secret Comedy Club in Covent Garden for a cheap and cheerful night. £1, prebook, 8pm

SKETCH COMEDY:
Sooz Kempner will be performing Character Activist at Leicester Square Theatre before taking it to Edinburgh. Expect songs and sketches dominated by an Essex princess, posh vlogger, heptathlete and an ageing diva. £7.50, prebook, 8.30pm

From Spice Girls tunes to double-denim outfits, I Love The 90s Party promises to take you a couple of decades back in time. Taking place Fridays at the Borderline in Soho and Saturdays at Camden’s Jazz Cafe, expect a night of music, dance and fun — seriously 90s style.

Since it started in 2007, I Love The 90s has become the biggest and longest running 90s-style party in London with sold out parties every week. Tickets start from just £5 and can be booked in advance on the website — get yours before it’s too late. 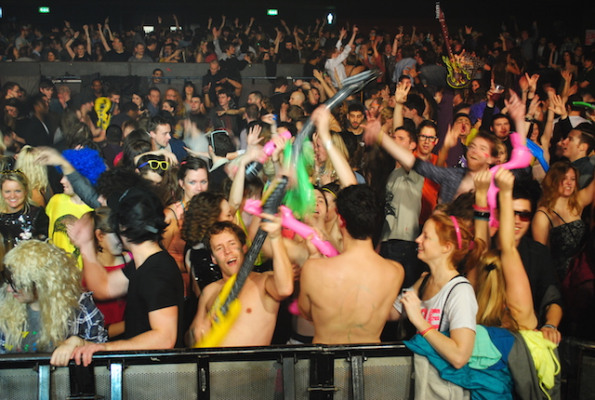 Things To Do In London This Weekend is sponsored by I Love The 90s Party.

Catch up on all latest features, see what we like in theatre and arts and browse more things to do in London.

What have we missed? Let us know what’s going on this weekend, leave a comment or email tips@londonist.com

For daily ideas of things to do in London subscribe to our emails.