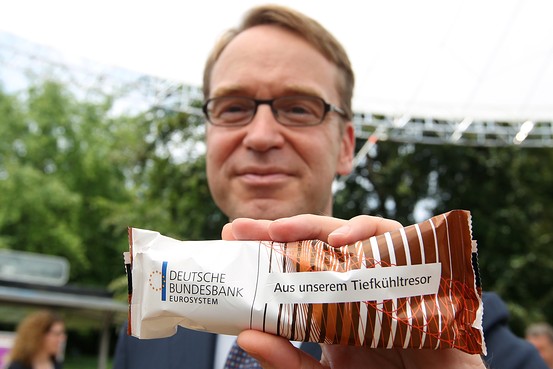 President of the Deutsche Bundesbank Jens Weidmann poses for a photo with a bar of ice-cream reading “From our deep freeze safe” ahead of the festival.
Agence France-Presse/Getty Images

Germany’s famously buttoned-down central bank, the Bundesbank, is aiming to show its family-friendly side this weekend by hosting a festival for the public featuring a ‘70s and ‘80s band, a comedy act and activities for kids. Of course, considering it’s the Bundesbank, also on offer are talks on serious topics such as such as “Avoidance of Financial Crises Through Stable Banks.”

The two-day public event at the Bundesbank’s fortress-like Frankfurt headquarters, as well as a satellite office a few kilometers away, is the first of its kind for Germany’s 67-year-old central bank, known around the world as “the Buba.”

“The mood here is like a children’s birthday party,” Bundesbank communications director Michael Best said Friday at a briefing on the festival. His boss, Bundesbank President Jens Weidmann, joined the jovial mood, challenging journalists to try their hand at a large board game that will allow people to navigate obstacles such as an oil-price shock. Visitors, who attend for free, will also get the opportunity to touch one of the Bundesbank’s gold bars.

The lighthearted nature of the festival aside—in-house choir Buba Singers is one of the acts—it appears to have a serious goal as well: strengthening the Bundesbank’s ties to a German public that has for decades counted on its central bank to keep inflation low and its currency stable.

The Bundesbank is credited with steering Germany’s post-World War II economic rise with tight-money policies and independence from political pressure. As former European Commission president Jacques Delors once said, “Not all Germans believe in God, but they all believe in the Bundesbank.”

In recent decades, the Bundesbank has dealt with a change in its status. It hasn’t pulled the levers on German monetary policy since joining the euro in the late 1990s. And because of the way the European Central Bank is structured, the Bundesbank has the same vote on ECB policies as smaller countries including Portugal and Latvia, even though Germany accounts for 30% of the euro zone’s gross domestic product.

Despite Germany’s financial heft, it has no veto power over how the ECB conducts its business. The ECB’s signature policy to resolve the euro zone’s debt crisis two years ago—a (so far unused) commitment to purchase unlimited amounts of government bonds of stressed euro members if needed—came over the objections of the Bundesbank’s Mr. Weidmann, who sees it as a risky blurring of fiscal and monetary policy.

Yet the Bundesbank still holds significant sway over the German public, and this weekend’s event is one effort to reinforce that bond.

The weekend festivities also offer a link to the bank’s more powerful past with appearances by former Bundesbank presidents: Hans Tietmeyer, 82, who ran the Bundesbank from 1993 to 1999, a period when Germany joined  the euro zone and Helmut Schlesinger, 89, who was Bundesbank President from 1991 to 1993 during German reunification.

The challenge for Mr. Weidmann, 46, has been to balance the Bundesbank’s conservative roots with the need for unorthodox policies brought on by financial turbulences in the euro zone since 2008.

Lately Mr. Weidmann has taken a more conciliatory tone. He defended the ECB in Germany against accusations that its low-interest rate policies are punishing German savers by reducing the rates they earn on bank deposits.

Though he continues to voice opposition to large-scale bond purchases, known as quantitative easing, in June he voted in favor of a significant package of stimulus measures that included a negative rate on bank deposits parked at the ECB.

And if Germans are feeling any angst? Amid the bands and other entertainment on the weekend program, Mr. Weidmann is hosting several sessions including ones where he will take questions from the public.