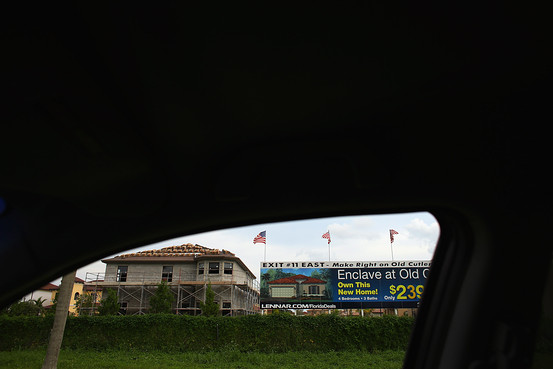 “In place of increasing incentives across the board, we strategically used them on specific communities where we thought the sales pace was a little slow,” Lennar CEO Stuart Miller said.
Getty Images (2012)

New-home sales appear to have gained momentum of late, and part of that boost is coming from builders’ use of more sales incentives to lure buyers off the fence.

“For Lennar to put up a solid number and to beat the expectations kind of reassures investors that the housing recovery is on track,” said Nishu Sood, an analyst who tracks home builders for Deutsche Bank Securities.

Meanwhile, many economists and builders expect a healthy gain in August new-home sales when the Commerce Department releases its data next week. That’s partly because last month included 10 weekend days, which are prime buying periods, in comparison to eight in July and nine in August 2013. But many also attribute their optimism to a general sense that numerous economic indicators, including job growth, slight wage growth and slowly improving credit conditions, bode well for new-home sales in the balance of this year.

Builders are so giddy that the National Association of Home Builders’ monthly index of home-builder confidence rose by four points in September from August to 59, the index’s highest reading since 2005. Any figure exceeding 50 indicates that more builders consider market conditions favorable rather than bad.

One hitch amid the hoopla, though, is that the increase in sales volume likely will cost investors while it benefits home buyers. The reason: Builders increasingly are goosing sales by using more sales incentives. Those can include free upgrades of amenities like premium flooring and financial assistance for the buyer such as covering closing costs. That helps the buyer, but it crimps builders’ profit margins.

“Incentives have increased because builders aren’t selling as well as they would like,” said John Burns, chief executive of housing research firm John Burns Real Estate Consulting Inc. in Irvine, Calif. “Some of the communities pushed prices too far. Rather than reducing prices (outright), they use incentives.”

Indeed, the median sales price of a newly built home in the U.S. in July was $269,800, close to the all-time high set two months earlier and 13.6% higher than two years prior.  As sales have slowed this year, builders are loath to cut prices outright because it hurts the value of homes they still have in their construction pipelines. Incentives are a de facto means of lowering prices without actually cutting the advertised price.

Several builders, including D.R. Horton Inc., have acknowledged in recent months relying more heavily on incentives. A monthly survey by Wells Fargo Securities of 150 home-builder sales managers in 20 U.S. markets found that 26% of respondents increased their use of incentives in August, up from 21% in July and 17% in August 2013. Overall, decidedly more respondents have boosted their use of incentives in the past year than in the previous year. 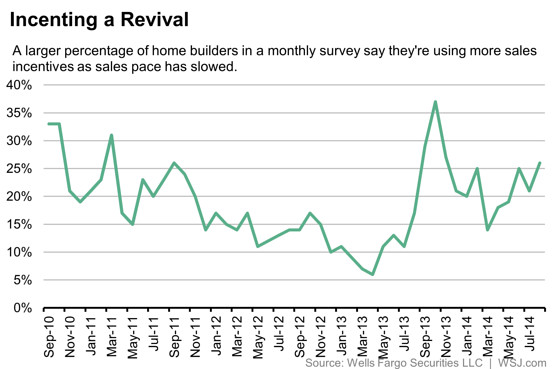 However, those figures are a lagging indicator, because they tally incentives on completed home sales rather than on sales contracts. Lennar executives said in a conference call with investors on Wednesday that the builder has offered more incentives of late to real-estate agents who bring buyers to it.

“Many of our competitors are offering large incentives to drive sales,” Lennar CEO Stuart Miller said on the call. He added, “In place of increasing incentives across the board, we strategically used them on specific communities where we thought the sales pace was a little slow.”

In releasing its results Wednesday, Lennar reported that its average sales price on closed home deals increased by 14% from a year earlier to $332,000. Its revenue increased by 26% to $2 billion. Its gross margin on home sales, the figure that would take a hit if incentives increased, was 25.2% in the quarter, up from 24.9% a year earlier.

Other builders are feeling more pressure from rivals using incentives. Dennis Webb, vice president of operations for Arizona home builder Fulton Homes, said competitors in his market are “offering steep discounts” amounting to $60,000 to $80,000. He noted that, at this time of year, many builders are looking to clear out much of their unsold inventory so that it’s off their books by the end of the year.