The U.S. economy may have posted even stronger growth last quarter thanks to higher-than-expected growth in business stockpiles. 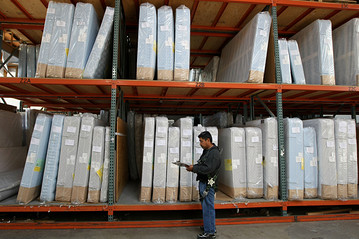 The U.S. economy may have posted even stronger growth last quarter thanks to higher-than-expected growth in business stockpiles.
Getty Images

Wholesale inventories rose a seasonally adjusted 0.4% in October from the prior month, the Commerce Department said Tuesday. Economists surveyed by The Wall Street Journal had predicted a 0.3% gain.

September inventories also were revised up by $887 million from an initial estimate, which could boost growth estimates for the third quarter.

The Commerce Department last month said output expanded at a 3.9% seasonally adjusted annual rate in July through September, up from an initial estimate of 3.5% growth. One big factor in the upgrade was a smaller drag from inventories.

The agency will release its third estimate of GDP growth in the third quarter on Dec. 23, incorporating new and revised data including the latest inventory figures.

But J.P. Morgan Chase economist Daniel Silver warned in a note to clients that “a larger inventory accumulation in the third quarter is a negative development for GDP growth in the fourth quarter, adding a touch more to the already sizable downside risk to our forecast for 2.5%” growth in the final three months of the year.

Another wild card for third-quarter GDP is the Quarterly Services Survey, which the Commerce Department will release Wednesday. The report tracks revenue at service-providing firms, and in the past had led to significant revisions for estimates of consumer spending on health care and other services.