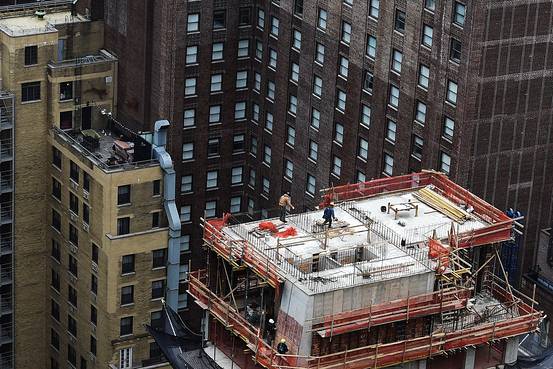 Of the 10 busiest U.S. markets for home construction, those that grew the fastest in this year’s first half from the same period a year ago generated more than half of their construction as multifamily complexes rather than detached, single-family homes.
JEWEL SAMAD/AFP/GETTY IMAGES

The busiest and fastest-growing large metro areas in the U.S. in the first half of this year have something in common: an affinity for apartments and condominiums.

Commerce Department data released this week show that, of the 10 busiest U.S. markets for home construction, those that grew the fastest in this year’s first half from the same period a year ago generated more than half of their construction as multifamily complexes rather than detached, single-family homes.

So what does it mean? Well, it’s further proof that the increase in construction of multifamily rental properties is handily outpacing that of single-family, for-sale properties in the U.S. That explains how the U.S. can post gains in household formation and yet still see declines in its homeownership rates to a multidecade low.

“Multifamily construction is the main force behind the improvement in home building,” said Michelle Meyer, deputy head of U.S. economics for Bank of America Corp. “It reflects that rental rates continue to move up, and there is demand for rentals, particularly close to city centers.” 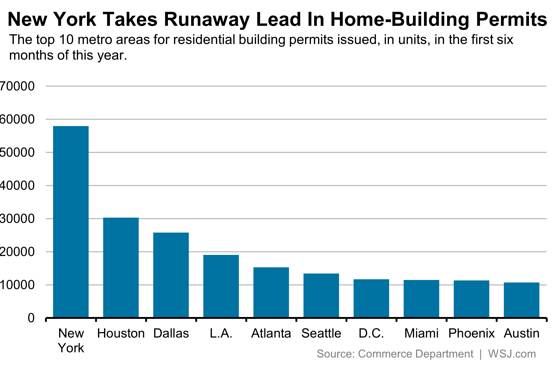 On the brighter side, looking ahead, it’s a reasonable assumption that the young folks now flooding into rentals will want to buy a home in the coming years, a future boon for builders.

Few markets are as steeped in multifamily housing as the New York metro area. But even New York, like other major cities, has become more so in recent years. Of residential permits granted in the New York metro area in the first half of this year, nearly nine of every 10 units were to be built in big complexes. That’s an increase from New York’s 71% ratio a year earlier, and its 59% ratio in the first half of 2007.

The other fastest-growing markets mirror that trend of increasing focus on construction of complexes with five units or more. In the Los Angeles metro area, 72% of permits granted in this year’s first half were for units in big multifamily projects. In Miami, it was 69%. In Seattle, 64%. For each, those ratios are higher than they were in 2007, at the height of last decade’s boom. 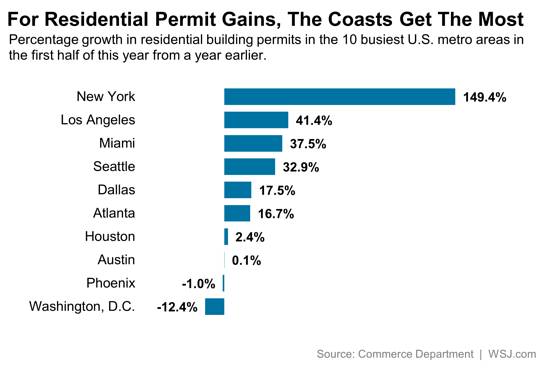 In few cases is the trend more divergent as in the comparison of the Houston and New York metro areas, which swapped spots in this year’s first half as the busiest and second-busiest home-construction markets.

Houston, which favors building detached, single-family homes, has reigned as the busiest U.S. metro for home construction since 2009, thanks in large part to a boom in the energy sector that fuels so many jobs in the area. But a decline in oil prices of more than 50% since mid 2014 has sapped Houston’s momentum, whittling its job growth in the past 12 months to 1.9% from 3.4% in the previous year. In turn, Houston’s gain in permits for residential construction dwindled to just 2.4% in this year’s first half from the same period of last year, down from an 18.3% increase in the previous year.

Home builder Ryland Group said Thursday that its second-quarter sales in Houston declined by 14% from a year earlier. However, Ryland Chief Executive Larry Nicholson added that he thinks Houston as “hit the bottom” and now is rebounding.

“Above the $350,000 price point, there is a lot of softness in the market” in Houston, Mr. Nicholson said. “Below that, the activity still is strong. But we do feel that market is moving in a (good) direction.” 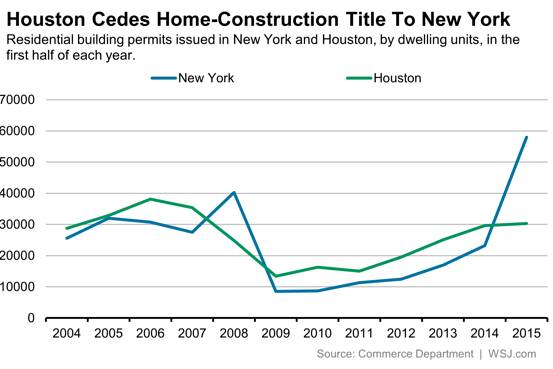 New York, meanwhile, has gone stratospheric, posting a 149% gain in permits in this year’s first half from a year ago. The 57,975 residential permits issued in the New York metro area in the first half of this year  (New York City alone had 42,088 permits) nearly doubled the total of runnerup Houston. Sure, some of the gain can be attributed to the metro area’s job growth, which slowed slightly to 2.1% in the past year from 2.5% in the prior year. And some can be attributed to a long-anticipated surge of projects finally obtaining elusive government entitlements and hard-fought financing after the downturn.

Yet the bigger influence likely comes from uncertainty about the anticipated June 15 expiration of the 421-a property-tax abatement for new residential construction in New York City. The abatement eventually was extended to the end of this year. But developers rushed to get in under the wire in June regardless. Residential permits issued in the metro area increased gradually from 3,285 units in January to a frothy 22,481 in June, Commerce data show.

A dropoff in activity now is expected in New York, but the extent of it is debatable. “Now that (the abatement deadline) has been extended, we would expect to see much lower permit issuance in the months ahead, given the pull-forward that occurred in the second quarter,” said Dan Oppenheim, a managing director at real-estate research firm Zelman & Associates.

While permit issuance might wane, construction activity stands to hum along as the permitted projects move forward, which stands to bolster New York’s construction employment for several quarters.

According to development consultant Nancy Packes, nearly 127,000 units are in the pipeline in New York City, meaning they are in the planning stages, have received permits or have started construction.

Construction in New York City Goes Through The Roof

5 Things D.R. Horton’s Results Tell Us About the New-Home Market