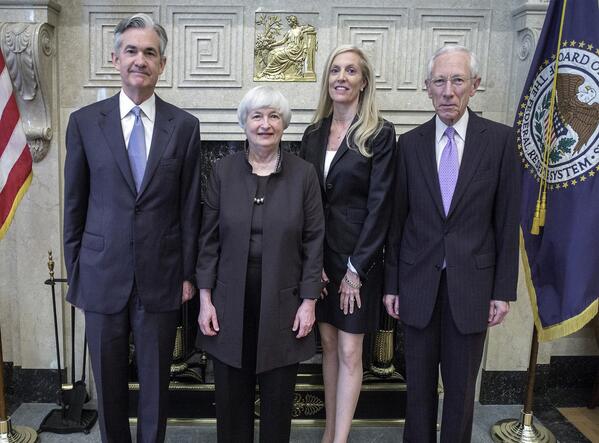 President Barack Obama‘s three latest picks for the Federal Reserve Board, including Vice Chairman Stanley Fischer, have been sworn in just in time to participate in a two-day policy meeting this week.

Former Treasury official Lael Brainard was also sworn in Monday, along with Jerome Powell, who has been reappointed for a second term at the board. The oaths were administered by Fed Chairwoman Janet Yellen in the Fed board room, the central bank said Monday. The Fed’s influential Washington-based board, which directs the country’s interest rate policy, is now operating with five members out of the seven that would comprise a fully-staffed board of governors.

The Fed has been gradually winding down its controversial bond-buying program, aimed at keeping long-term borrowing costs down–and is expected to cut it back by an additional $10 billion in monthly purchases at this week’s meeting, which concludes on Wednesday.

The Fed will also release a new round of quarterly forecasts, which are closely-watched for clues to the path of interest rates. Ms. Yellen will hold a press conference after the meeting’s conclusion.

U.S. official interest rates have been effectively at zero since December 2008 as the Fed responded aggressively to a deep recession and a historic financial crisis. In addition, the central bank has bought over $3 trillion in mortgage and Treasury bonds in an effort to continue stimulating economic activity while rates are at zero.

Mr. Fischer brings a wealth of policy experience to the job. A dual citizen of the U.S. and Israel, he led the Israeli central bank between 2005 and 2013. He was also a vice chairman of Citigroup between 2002 and 2005 and deputy managing director of the International Monetary Fund from 1994 through 2001. During that period, Mr. Fischer earned his crisis-management experience, overseeing the Fund’s sometimes-controversial response to debacles such as the Mexican peso crisis and the Asian financial meltdown.

Ms. Brainard also has a strong international background, having served most recently as President Obama’s undersecretary for international affairs at the U.S. Treasury.

The Fed faces a growing debate over when to begin raising interest rates as the economy recovers. Board governors also play a key role in regulatory tasks, which have multiplied as regulators implement financial reforms mandated by the Dodd-Frank Act.