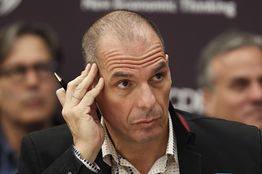 Greek Finance Minister Yanis Varoufakis is meeting his eurozone counterparts in Riga on Friday and Saturday, where discussions will focus on the progress of negotiations between Greece and its international creditors.
Reuters

RIGA, Latvia–The president of the European Central Bank said Friday that time was running short in negotiations on Greece’s bailout and warned that the uncertainty was hurting the country’s banks.

“Time is running out,” Mario Draghi said after a meeting with eurozone finance ministers in the Latvian capital, Riga. “Speed is of the essence.”

Asked how much longer the ECB would allow Greek banks to get emergency liquidity from the Greek central bank, Mr. Draghi said that such loans would be supplied as long as the banks were solvent.

He also pointed out that the current situation—and high interest rates on Greece’s debts—were making it more difficult for Greek banks to find the assets they need to post in return for these loans. “The higher is the volatility, the more collateral gets destroyed,” Mr. Draghi said.

The ECB already stopped accepting Greek debt as collateral in its own liquidity operations in February and Greek banks have been relying on more-expensive lending from the Greek central bank. In recent days, speculation has mounted on whether the ECB would require steeper discounts, or haircuts, on Greek assets.

Mr. Draghi also took a swipe at the way the Greek government has been conducting negotiations on overhauls it plans to take in return for continued aid from the eurozone and the International Monetary Fund.

“There can’t be an agreement if people don’t have an adequate process to assess, quantify policy measures,” Mr. Draghi said.