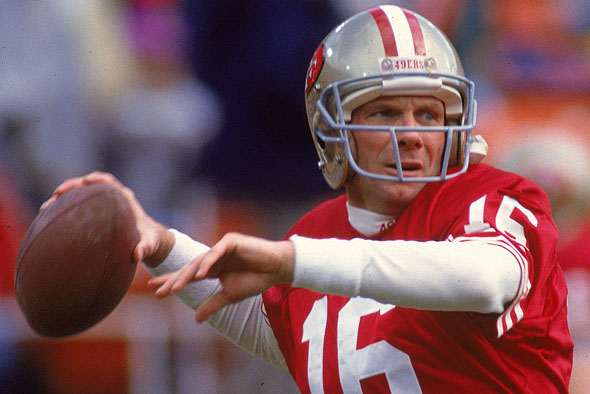 With elite passers dominating the NFL these days, there’s not much argument that the position is the most crucial to a team’s success now more than ever.

But while statistics have been inflated by offensive trends shifting towards passing and the increasing amount of penalties being called on defensive secondaries, it’s not always about pure numbers.

There are many factors that go into determining a quarterback’s true ranking in the annals of NFL history, and stats are only part of that. Obviously the most important determining factor would be the amount of Super Bowls won and the quarterback’s performance in those games.

It’s crowded at the top. Here are the top five quarterbacks in NFL history:

Montana tops this list for his unprecedented four Super Bowl rings. Yes, he was surrounded by the best talent in Bill Walsh’s 1980’s juggernaut, including wide receivers Jerry Rice and John Taylor, running back Roger Craig, and tight end Brent Jones, but no one could deliver under pressure like “Joe Cool.”

His game-winning 92-yard drive to beat the Cincinnati Bengals with 34 seconds left in Super Bowl 23 is prove of this, as was his infamous 1981 NFC Championship-winning throw to Dwight Clark that has gone down in NFL history as “The Catch.” Those were only two of his 31 career fourth quarter comebacks.

He may have only completed 3,409 passes for 40,551 yards with 273 touchdowns and 139 interceptions throughout his career, but when the game was on the line, there’s never been a better quarterback than Montana.

A close second to Montana, Elway combined top-level passing and scrambling skills before that was a major trend in the NFL. He enjoyed a ton of success throughout his career in Denver, but couldn’t get to the pea of the mountain until his final two years, when he retired on top by winning the Super Bowl both times.

He completed 4,123 passes for 51,475 yards with 300 touchdowns and 226 interceptions, and his game-winning antics late in game put him on par with Montana. The Broncos leader will never be forgotten for “The Drive.”

The only thing that gives Montana a leg up on Elway is the Broncos three Super Bowl looses in the 1980s, one of which came to a massive blowout to Montana’s 49ers.

Elway was an entertaining quarterback and a winner, and a strong case can be made for him as the greatest of all-time.

When it’s all said and done, Manning may just top this list. He’s still going strong at 38 years old, setting NFL single season records for both passing yards and touchdowns in leading the Broncos to the Super Bowl last year.

In terms of statistics, there will eventually be no equal to Manning. He’s completed 5,532 passes for 64964 yards with 491 touchdowns and 219 interceptions, and those numbers continue to build with unstoppable momentum with each year.

The only knock is his inability to win big games with consistency, as he’s failed in the AFC Championship game and lost to Super Bowls while only winning one. But the book is still open on his career, and he’s averaged 13 wins a year during the regular season, a record that no one is really even close to.

He’s not as clutch as Montana and Elway but Manning is a tactician that carves defense up without peer.

If this list were based on personal passing skill alone, perhaps Marino would trail only Manning for the to spot on this list. He threw for over 5,000 yards and 48 touchdowns when those numbers were simply thought of as unattainable, and he connected on 4,967 passes for 61,361 yards with 420 touchdowns and 252 interceptions throughout his career.

Like Manning Marino’s lack of overall playoff success is what held him back. He never enjoyed even close to the postseason results as Manning; however, failing to Montana’s 49ers in the only Super Bowl he ever played in. That’s a shame, because Marino was never surrounded with the defensive talent to find true success in the NFL.

But he never complained, he just kept slinging bullets through opposing teams’ defense to earn his spot as one of the most effective quarterbacks of all-time.

Brady could very well be at the top of this list is only a few breaks would have gone his way in his recent Super Bowl appearances. Still, Brady has won three Super Bowls in New England since emerging as the team’s unlikely starter in 2001. Like Montana and Elway, he’s able to guide his teammates to game-winning drives under extreme pressure, and he hasn’t always been surrounded by amazing talent.

Brady has completed 4,178 passes for 49,149 yards with 359 touchdowns and 134 interceptions, which are not exactly eye-popping statistics in today’s pass-heavy NFL. But before Manning rewrote the record books last year, Brady held the single season record for most touchdowns stemming from his monumental 2007 season.

Paired with longtime Patriots head coach Bi Belichick, Brady keeps the revolving door of Patriots players in the playoffs year in and year out. With a chip on his shoulder, Brady still has time to add another Super Bowl ring and perhaps take the number one spot on this list.