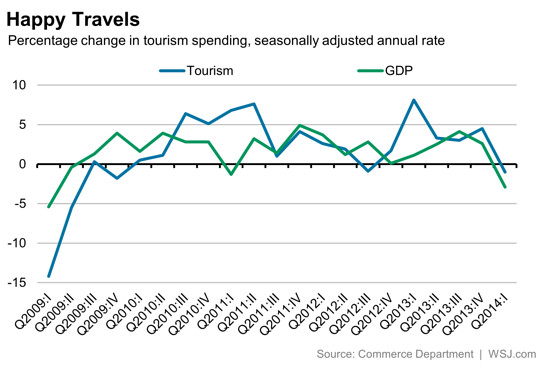 With the economy taking a sharp turn downward in the first three months of 2014, tourists in the U.S. kept their pocketbooks closed.

Spending on travel and tourism decreased at a 1% annualized rate in the first quarter, adjusted for inflation and seasonal factors, the Commerce Department said Friday.

The downturn  comes after a 4.5% gain the prior quarter and was the weakest figure since the last quarter of 2009, when tourism spending declined by 1.8%.

The drop in tourism spending was less severe than that experienced in the overall economy, which contracted by 2.9% in the January-March period.

The first quarter’s downturn in tourism spending was driven by a 11.2% decline in spending on recreation and entertainment as well as a 3.5% drop in spending on food and drinks.

However, the quarter’s drop may be a temporary blip.

In the Federal Reserve’s latest “Beige Book” summary of economic activity, the central bank  said tourism “was steady to stronger across most of the country” – especially in the eastern states. Tourists in mid-Atlantic states appear eager to open their wallets, the Fed said in the June 4 report.

Prolonged winter weather has “increased cabin fever and demand for summer getaways along the shore,” the Fed said. “In addition, some boat owners are bringing their boats back to the shore following recession belt-tightening.”

Despite the drop in spending, employment in tourism-related industries increased 2.1% in the first quarter, compared with a 1.5% gain total U.S. payrolls.