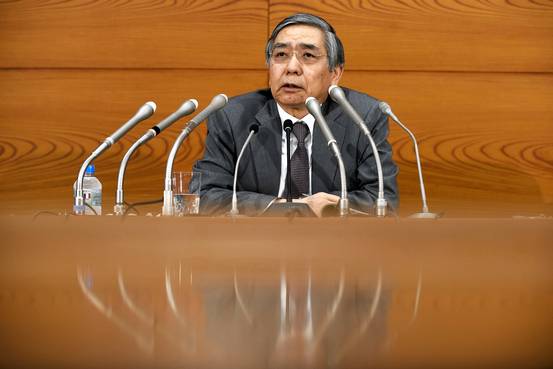 Haruhiko Kuroda, governor of the Bank of Japan, spoke on April 8 after a policy board meeting that didn’t deliver any surprises.
Akio Kon/Bloomberg News

Tokyo share prices are at a 15-year high and the economy appears to be slowly shaking off last year’s recession, but traders in financial markets are still on high alert over the Bank of Japan’s policy board meeting Thursday.

It has been six months since the central bank surprised markets with a new round of monetary easing. The bank holds a one-day policy board meeting twice a year–in late April and late October–in addition to monthly two-day meetings. The one-day meetings tend to set the tone for policy because they are timed to coincide with the release of the BOJ’s semiannual outlook on inflation and growth.

“We can’t relax our guard, considering the October case, even though a chance of fresh action is small,” says Yuji Saito, executive director of foreign exchange at Crédit Agricole in Tokyo. He has instructed all his staff to be in the dealing room when the announcement is likely to be made.

A long meeting would make traders more jittery. Last October’s meeting ended at 1:39 p.m. local time after starting at 9:00 a.m. For comparison, the two-day meeting this month, which resulted in no action, ended at 12:31 p.m.

BOJ Gov. Haruhiko Kuroda has repeatedly made bullish comments on inflation recently. He said on a U.S. visit that the underlying inflation trend has “improved markedly,” even though consumer prices aren’t rising mainly because of a decline in crude-oil prices.

Still, Mr. Kuroda made that kind of comment six months ago–and it didn’t stop him from acting. Traders say they view Mr. Kuroda as results-oriented and keen to do whatever it takes to hit his 2% inflation target.

Meanwhile, market observers are debating whether Kuroda-style surprises are healthy. Former BOJ policy board member Miyako Suda says they amount to “deceiving markets” and won’t be helpful when the central tries to trim its easing program. Some BOJ watchers say surprises might be needed to reverse a common mindset in Japan that nothing can be done to stop deflation.

As for Mr. Kuroda, he denied in parliamentary testimony last week trying to surprise anyone, though he conceded that the market consensus sometimes diverges from where the central bank is heading.