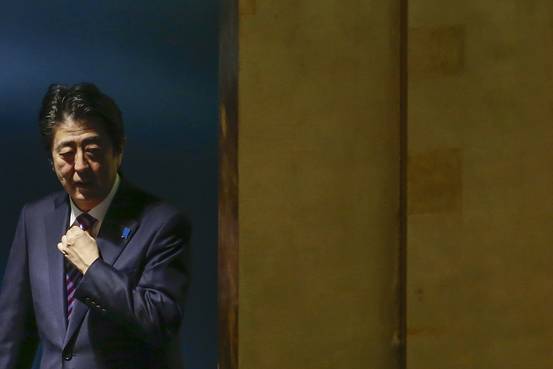 Among the big winners from Monday morning’s sweeping pan-Pacific trade pact: Japanese Prime Minister Shinzo Abe, who has been desperate for some good news lately. The deal shows there’s still some life in his much-maligned Abenomics revival program, and his campaign to implement painful, politically difficult structural reforms seen as essential to lifting his country out of its long stagnation.

No leader, no economy, among the dozen countries in the Trans-Pacific Partnership, has more invested in the deal. The trade bloc’s potential global significance was enhanced by Mr. Abe’s surprising 2013 pledge early in his term to have the world’s third-largest economy join the negotiations. And the agreement struck after months of negotiations was made possible in part by Mr. Abe’s unusual willingness to take on entrenched agricultural lobby that has been a main supporter for his long-ruling Liberal Democratic Party, including last-minute concessions to further open Japan’s dairy market.

TPP also feeds into Mr. Abe’s broader strategic goal of cementing Japan’s role in the 21st century as America’s main Asian ally in a region centered around the U.S.-Japan alliance, and as a counterweight to China.

“The greatest absolute gains” from TPP “are estimated for Japan,” according to a 2012 analysis from the Peterson Institute for International Economics examining the implications for the then-nascent bloc.

The past few months have been difficult, politically and economically for Mr. Abe and Abenomics.

His program of bold monetary stimulus has struggled to give the economy any sustained lift. Recent data suggests Japan this summer likely fell into its second recession—two consecutive quarters of negative growth—in two years, dragged down by China’s slump, as well as stingy consumers and executives skeptical about his pledges for a brighter future.

Mr. Abe’s focus in recent months on controversial legislation expanding Japan’s military sapped his popularity and raised questions about whether his attention had shifted from economics to his nationalist agenda. When Mr. Abe tried to rebut such criticism by unveiling “Abenomics 2.0” in late September, he was greeted with more jeers about the continued lack of details.

“This new plan is unlikely to accelerate work to implement reforms,” Scott Seaman, a Washington-based Japan expert for Eurasia Group, wrote to clients, “and may well add confusion to a large, multifaceted process that many people inside and outside Japan already find frustratingly complex.”

TPP gives Mr. Abe a chance to counter those doubts.

The main rap against Abenomics has been that the prime minister has put the least energy into the most important part of his platform, the so-called third arrow of economic reforms. The first two arrows—expansive monetary and fiscal stimulus—were at best seen as giving the economy a short-term lift.  The third arrow of clearing away Japan’s many inefficiencies has been seen as crucial for lifting the longer-term growth potential for an economy that has barely expanded since its asset bubble burst a quarter century ago.

Despite Mr. Abe’s bold rhetoric, his reform platform has generally been mild, seeking only minor changes in some of the biggest challenges damping growth, from a rigid labor market to a thicket of red tape limiting business formation.

TPP stands out as an exception. Mr. Abe has used the negotiations to begin the process of shaking up Japan’s agricultural lobby, and, more broadly, to embrace a long-delayed modernization of the country’s reliance on heavy protections for an aging, shrinking farm sector.

To be sure, the deal’s implementation is still uncertain, hinging on the ability of U.S. President Barack Obama to steer the pact through Congress. (Mr. Abe is expected to have no trouble winning ratification in Japan’s parliament.) And even when a deal does take effect, the gains will take years to register. But the changes could, over time, offer Abenomics a lasting legacy of positive change for Japan.

Trans-Pacific Partnership – At A Glance