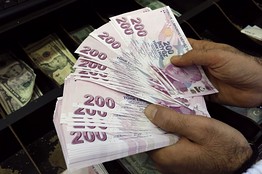 A money changer counts Turkish lira bills at a foreign-exchange office in Istanbul on Dec. 16, when the currency fell to a record low against the dollar.
Reuters

ISTANBUL—Turkey’s central bank on Wednesday held interest rates steady for a fourth consecutive month, as policymakers maintain a tight stance due to stubbornly high inflation and following the recent selloff in the currency.

The Monetary Policy Committee kept the benchmark one-week repo rate unchanged at 8.25%, the central bank said in a statement on its Website. Policymakers also didn’t make any changes to the interest-rate corridor, which ranges between the overnight borrowing rate of 7.5% and the overnight lending rate of 11.25%.

The decision to hold rates steady was in line with the expectations of eight economists surveyed by The Wall Street Journal.

“Inflation expectations, pricing behavior and other factors that affect inflation will be closely monitored and the tight monetary policy stance will be maintained, by keeping a flat yield curve, until there is a significant improvement in the inflation outlook,” the central bank said.

It said policymakers reiterated their view that the inflation rate will slow faster in the first half of 2015. Central Bank Governor Erdem Basci had said on Dec. 10 that consumer price increases could drop very close to the official target of 5% in the first four months of next year.

After the decision on interest rates, the Turkish lira was steady against the dollar, trading at TRY2.3228, compared with TRY2.3224 before the decision, while the yield on the benchmark two-year government bond was steady at 8.15%.

The lira came under renewed pressure last week amid a broader selloff in emerging markets currencies as expectations rose the U.S. Federal Reserve would start raising interest rates next year. On Dec. 16, the lira weakened to a record low of 2.4174 against the dollar and has slumped 8% against the greenback this year.

In late January, the Turkish central bank was forced to more than double its benchmark rate to 10% at an emergency meeting to shore up the currency, which was caught up in an emerging-markets rout following the Fed’s decision in December last year to start tapering its monthly bond purchases.

The government called on policy makers to quickly reverse the rate increase and the central bank started easing its policy stance in the spring. The central bank made three consecutive cuts to the benchmark rate from May, and two cuts to the interest-rate corridor in July and August.

But it has held interest rates steady since September despite falling oil prices and weak economic growth as inflation remains high. Turkey’s annual inflation rate rose to 9.15% in November from 8.96% in October due to high food prices, putting it at nearly double the medium-term target of 5%.

Oil prices have dropped more than 40% this year to $61 a barrel and Turkey’s economic growth slowed to a two-year low of 1.7% in the third quarter because of weak consumer spending.

“While the precipitous fall in global oil prices bodes well for inflation and is a valid argument in favor of lowering interest rates, Governor Basci explicitly said that the central bank will retain a tight bias until inflation expectations improve markedly,” said Piotr Matys, a currency strategist at Rabobank. “More importantly, the TRY selloff witnessed in the middle of December was a timely reminder that room to trim interest rates might remain fairly limited even if inflation decelerates next year.”