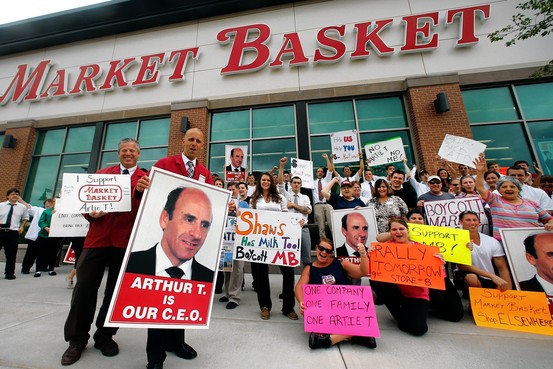 A management fight and worker revolt at a New England grocery store chain helped drag down U.S. payrolls during the month of August, the Labor Department said Friday.

Though it’s not named in the closely watched jobs report, the company almost certainly is Tewksbury, Mass.-based Market Basket, a family-owned chain that operates 71 stores  across Massachusetts and New Hampshire.

The June dismissal of popular chief executive Arthur T. Demoulas, amid a long-running battle with his cousin Arthur S. Demoulas, led to weeks of turmoil as workers demanded his return, a battle covered in detail by the Boston Globe. At one point in August, thousands of part-time workers had their hours cut, some to zero.

Erica Groshen, commissioner of the Bureau of Labor Statistics, noted Friday that employment in August at U.S. food and beverage stores fell by a seasonally adjusted 17,000. “This industry was impacted by employment disruptions at a grocery store chain in New England,” Groshen said in a statement.

Those disruptions likely will fade by the next jobs report. Arthur T. Demoulas reached a deal in late August to buy the company from his cousin and other relatives, the Globe reported.

Economists at IHS Global Insight expect the end of the dispute could potentially add at least 30,000 jobs in the food-store category in September. The Labor Department will release its September jobs report on October 3.

The nation as a whole last month saw the weakest payrolls growth of the year. Nonfarm employers added a seasonally adjusted 142,000 jobs and the unemployment rate ticked down to 6.1%.

WSJ’s Hilsenrath: Jobs Report Leaves Fed in No Hurry To Alter Views on Slack or Rates