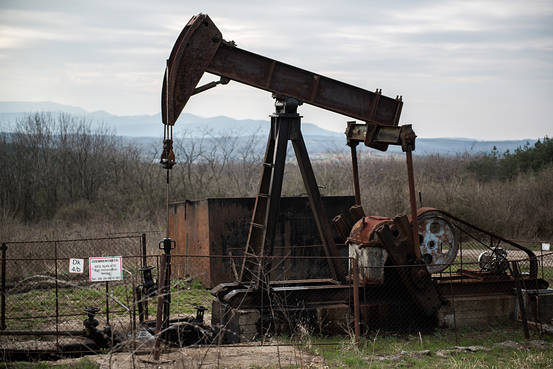 Pullbacks in the oil patch are weighing further on the U.S. economy.
Akos Stiller/Bloomberg News

The tumble in oil prices is set to take another bite out of overall U.S. economic output.

The overall energy sector accounts for just about 4% of inflation-adjusted gross domestic product when adding up contributions from four areas: utilities; oil and gas extraction; petroleum and coal products; and pipeline transportation, and it represents just 1.5% of employment, according to estimates by Deutsche Bank chief U.S. economist Joseph LaVorgna. Given that small slice, many analysts and traders have assumed sharply lower energy-related capital spending isn’t a big threat to the broader economy.

But the turmoil could weigh on GDP more than anticipated. Capital spending per employee is much higher in the oil sector than elsewhere, said Ian Shepherdson of Pantheon Macroeconomics, and oil firms can’t save themselves simply by cutting staff. (Their biggest expense is equipment.) Throngs of energy companies from giants Exxon Mobil and Chevron to smaller players like Anadarko Petroleum further hacked away at capital-expenditure budgets in the final months of last year. That’s as many of them cut jobs and whack dividends.

Upstream spending–on things like drills and property, for example–typically accounts for the bulk of energy companies’ investment spending, said Jeff Barron, an economist at the U.S.Energy Information Administration. If the drop is big enough, even a small sector of the economy can have meaningful effect on quarterly GDP numbers.

Take the auto industry, which made up an even smaller piece of the economy when it knocked 1.75 percentage points of GDP growth at the end of 2008, according to Mr. LaVorgna.

In the third quarter, total energy capex was $92.7 billion, nearly halved from a year earlier, according to Goldman Sachs analyst Daan Struyven. That was the lowest capital expenditure per barrel of oil produced in at least five years.

“It’s meaningful and it can become more meaningful,” said ITG chief economist Steve Blitz, noting that any surprise from capex in Friday’s report would likely be a negative one.

In the first three quarters of 2015, cutbacks in energy capex shaved an average 0.55 percentage point off of GDP growth, Mr. LaVorgna said. He expects a similar hit to the fourth-quarter number. For his part, Mr. Struyven predicts a smaller impact–about 0.2 percentage point–but said there is some additional downside risk.

To estimate energy-related capital spending, economists look at the inflation-adjusted GDP growth contribution of two investment categories: mining, exploration, shafts, and wells structures in addition to mining and oilfield machinery. To get to those figures, the Commerce Department‘s Bureau of Economic Analysis uses figures including monthly data on footage drilled from the American Petroleum Institute and weekly rig-count data from Baker Hughes.

Crude’s decline started in the summer of 2014. And the worst may be nearing its end with oil prices already so low. But the extent of the bleeding has shocked investors and caught many companies off guard. While the worst of the oil-price decline may be behind us, the same probably isn’t true for capital spending. “As we move through this year, uncertainty over the [presidential] election and downbeat corporate confidence makes it unlikely capex recovers,” said Mr. LaVorgna. “It could even be negative.”