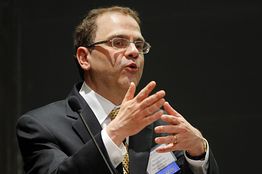 The Fed’s Board of Governors has kept the primary credit rate , the interest rate on short-term loans offered to sound banks, at 0.75% since February 2010.

For more than a year, the directors of nine regional banks have consistently recommended keeping it there, while the Dallas Fed, the Kansas City Fed and the Philadelphia Fed have recommended that the rate be raised to 1%.

The 12 banks stuck to those positions ahead of board meetings on Feb. 9 and Feb. 23, according to minutes released Tuesday by the Fed.

But in March, two banks broke ranks. The Cleveland Fed joined the banks calling for an increase to 1%, while the Minneapolis Fed called for a reduction to 0.5%.

“The directors requesting an increase … favored a move toward normalization of the primary credit rate in light of their outlook for economic and financial conditions as well as the risks to that outlook,” the minutes said. “Those directors favoring a reduction in the primary credit rate believed that a lower setting would be appropriate in light of the possible risks to the attainment of the Federal Reserve’s inflation objective.”

When the Fed board met on March 16, “no sentiment was expressed for changing the primary credit rate,” and it was kept at 0.75%, the minutes said.

From September to December 2013, the Minneapolis Fed made similar requests to lower the Fed’s discount rate, also without success.

This latest  shift came as the Fed debates when to begin raising its benchmark federal funds rate, which affects a much broader swath of the financial sector and has been anchored near zero since December 2008. Most officials expect to begin raising the fed funds rate sometime this year.

Cleveland Fed President Loretta Mester, who took office in June 2014, has signaled she favors raising rates relatively soon. “If incoming economic information continues to support my forecast, I would be comfortable with liftoff in the first half of this year,” she said on March 9.

Minneapolis Fed President Narayana Kocherlakota, on the other hand, has argued the Fed should hold off on raising rates until 2016 to meet its inflation and employment goals. “If we start to raise rates too rapidly, we’re going to push down on spending, push down on incomes, push down on employment, push down on prices. Everything’s going to go the wrong direction,” he said last week.