Two in Every Five U.S. Children Spend at Least a Year in Poverty – Real Time Economics 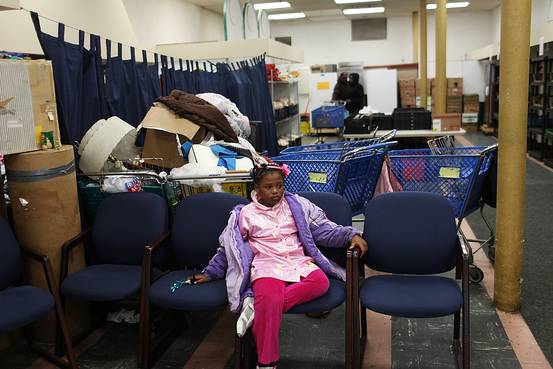 A girl waits for her mother at a food bank in 2012 in Utica, New York. A new analysis from The Urban Institute finds some 75% of African-American children are poor at some point in their childhood. –SPENCER PLATT/GETTY IMAGES

Childhood poverty is far more prevalent than annual figures suggest, a new paper says, with nearly two in every five U.S. children spending at least one year in poverty before they turn 18 years old.

The findings from Caroline Ratcliffe, a senior fellow at the Urban Institute, show particularly stark divides along racial lines. Black children fare much worse. Some 75% are poor at some point during their childhood, compared to 30% of white children. 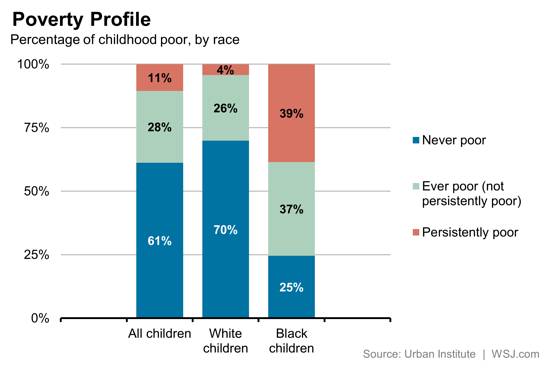 The Census Bureau is set to release its annual statistics next week on household incomes and poverty for 2014. Last year, the report showed that one in eight adults live below the poverty line, compared to one in five children.

The Urban Institute analysis, released Wednesday, used separate data from the Panel Study of Income Dynamics, a survey that has followed several thousand sets of parents and children since the 1960s, to examine the prevalence of poverty for children from birth through age 17.

Around one in 10 children are persistently poor, meaning they have lived below the federal poverty level for at least half of their childhood. Here, too, the researchers find a huge racial split, with around 39% of black children that are in persistent poverty, compared to 4% of white children.

The research dives deep on this group of poor children to find out common characteristics of those who succeed despite financial hardship and those who don’t. It finds that the longer children live in poverty, the worse their future advancement in the classroom. Persistently poor children, for example, are 43% less likely to finish college than those who are poor but not persistently poor during their childhood, and 13% less likely to finish high school.