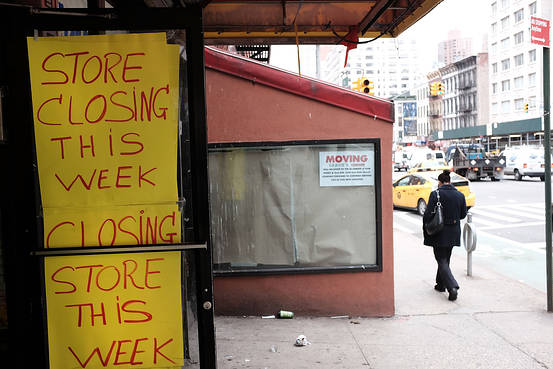 Small businesses in New York City, facing markedly higher rents, are estimated to close by the hundreds every month. Across the U.S., the number of small businesses has actually declined over the five years since the start of the financial crisis—the only such decline since the Census data first became available in the late 1970s.
SPENCER PLATT/GETTY IMAGES

The economy has taken longer to recover since the latest recession than previous economic downturns. But that lag is even more pronounced for small businesses, according to new research from Goldman Sachs.

Call it a two-speed economy. While large corporations have generally performed well since the crisis, generating strong revenue growth and boosting wages for workers, business formation has dropped off for small firms and employment growth is tepid.

The primary reason, they say, is new bank regulations imposed in the years following the financial crisis. The rules, including higher capital requirements, have increased the cost and reduced the availability of credit for small businesses, which rely mostly on banks for financing, they argue. New regulations also increase the fixed costs of doing business, which hurts small firms more than large companies that are able to spread new costs across a larger volume of business.

For example, job gains at firms with fewer than 500 employees had historically outpaced employment growth at larger firms. In recent years, however, that trend has reversed. The gap between wage growth at larger firms and smaller firms has also widened significantly in the years since the financial crisis. In addition, the number of small businesses has actually declined over the five years since the start of the financial crisis—the only such decline since the U.S. Census Bureau data first became available in the late 1970s.

A 2014 paper from the Brookings Institution presented similar findings, but stopped short of identifying what is driving the change. So-called business dynamism “is inherently disruptive; but it is also critical to long-run economic growth,” Brookings fellows Ian Hathaway and Robert Litan wrote.

“Whatever the reason, older and larger businesses are doing better relative to younger and smaller ones,” they added.

The “most plausible” explanation for this bifurcation, Goldman researchers argue in their new paper, is the impact of new regulations, which effectively act as a tax on small firms.

Business loans for less than $1 million are still well below their peak 2008 level, while larger business loans have grown more than 25% from their peak. The cost of the smallest business loans has also risen 10% from the precrisis average, which weighs on banks’ competitiveness. That in turn is leading larger firms to invest less, and in shorter-term projects, than has historically been the case.

“While perhaps not on a rule-by-rule basis, in the aggregate the cumulative effects of postcrisis regulations appear to have had a negative impact on the relative competitiveness of small businesses, reshaping the U.S. economy–and likely in ways that were unintended,” the authors argue.