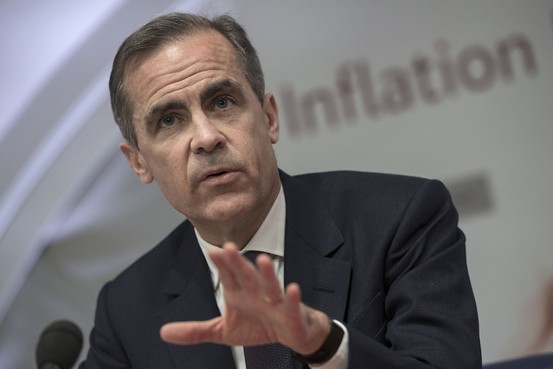 Bank of England governor Mark Carney speaking during a media presentation about its quarterly GDP and inflation forecasts at the Bank of England in London on Feb. 12. BOE officials have said they are watching inflation expectations carefully. But economists say there’s little need to worry just yet.
Associated Press

Expectations of future inflation in the U.K. are slipping.

Central bankers worry about public inflation expectations because they can influence inflation itself further out. If workers expect inflation to be lower in future, they may settle for a smaller pay rise than they would if they thought prices were going to rise quickly. That can lead to slower price growth and weaker inflation overall.

The Bank of England’s quarterly survey of inflation expectations in the U.K., carried out by pollsters GfK NOP, found Britons expect annual inflation of 1.9% next year, compared with expectations of a 2.5% rate when they were last polled in November.

A more dramatic fall in inflation expectations was registered earlier in the week by Citi, which carries out its own survey with pollsters YouGov PLC. According to Citi’s survey, Britons expect annual inflation of just 1% in the year ahead, the lowest reading since late 2008.

The decline reflects very low levels of actual inflation in the U.K., where price-growth has cooled sharply thanks largely to the sharp fall in the oil price. Annual inflation was just 0.3% in January, and BOE officials led by Gov. Mark Carney expect the rate to cool further in the months ahead, perhaps even briefly dipping into negative territory.