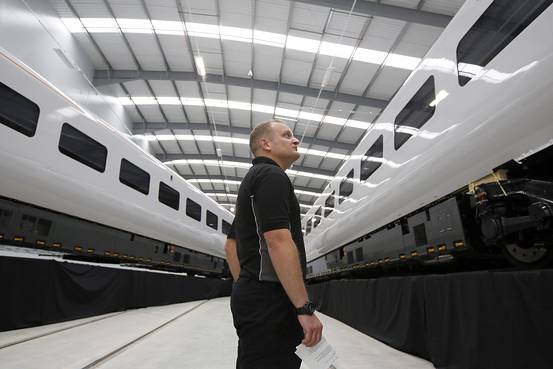 An employee looks up at Hitachi AT300 Class 800 series railway carriages at Hitachi Rail Europe’s manufacturing facility in northeast England. The gap in productivity between the U.K.’s and the rest of the Group of Seven was the largest on record in 2014.
LUKE MACGREGOR/BLOOMBERG

A pickup in U.K. productivity in the second quarter suggests Britain’s economic health is improving after a weak performance for eight years, though it still lags behind other Western economies.

On a per-hour basis, output produced by British employees rose 0.9% during the three months to June from the previous quarter, the Office for National Statistics said Thursday, the fastest rate in four years. That places the economy’s hourly output at the highest level on record.

That’s good news for the prospects of the U.K. economy going forward. Productivity measures how efficiently people and equipment are used to produce goods and services. Improvements in productivity are an essential fuel of long-term economic growth and the driving force that propels living standards.

British productivity has remained stubbornly weak in recent years, despite growth in employment and the economy—a phenomenon that economists have dubbed the “productivity puzzle.”

“U.K. companies may well now be really stepping up their efforts to lift productivity by getting more out of their existing workers and also stepping up investment,” said Howard Archer, economist at IHS Global Insight, who pointed at recent evidence by the Bank of England that businesses are starting to invest in new technology and automation—after years of being overly cautious and relying on cheap labor.

But U.K. productivity continues to lag behind the U.S. and other large industrialized economies. According to official U.K. data released last month, Britain’s productivity gap with the rest of the major Group of Seven advanced economies in 2014 was the largest since comparable estimates began in 1991. Government statisticians also say it remains about 15% below where it would be if the economy had followed its predownturn trend.

While economists say weak productivity has been in part due to U.K. employers hoarding more workers than they needed during the recession—a cyclical effect that helped contain unemployment rates—some underscore signs of deeply rooted economic hurdles remain, such as historically low levels of infrastructure investment. 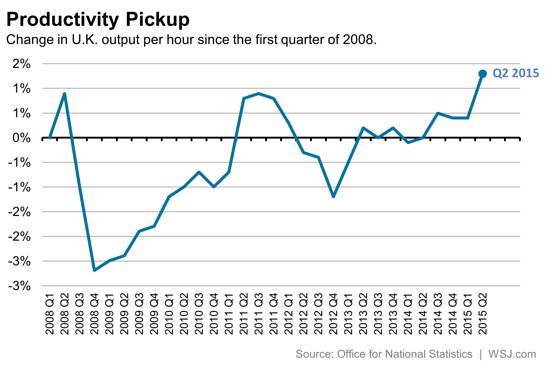 Policy makers at the central bank have been split over how much recent wage rises threaten the BOE’s medium target of 2% annual inflation. While consumer prices registered zero growth in the three months to August, recent data showed regular pay for British employees is rising at the fastest pace in over six years, due to a tighter labor market. Analysts say that if productivity catches up with labor costs the Bank of England will have scope to keep borrowing costs low for longer.

“You can argue it gives the bank a little bit more leeway,” said Peter Dixon, economist at Commerzbank , “but there are other factors at play, notably inflationary trends and international developments.”

But an uptick in the cost of labor in Thursday’s figures could still fuel the fears of hawkish officials in the central bank’s rate-setting panel. A rise in the government-mandated minimum wage has already increased costs for employers and will likely push them up more, according to Scotiabank analyst Alan Clarke.

BOE Appears on Course to Raise Rates Early Next Year