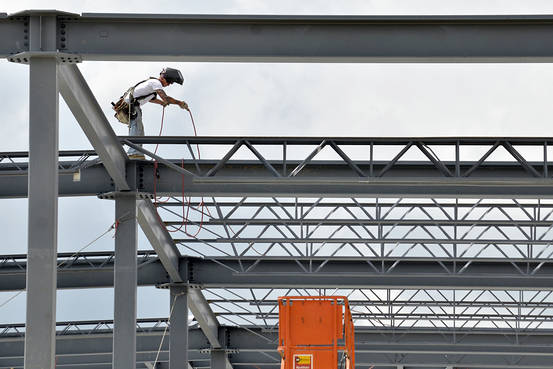 A steelworker maneuvers around metal trusses at Taylor University in Upland, Ind., in August.
JEFF MOREHEAD/THE CHRONICLE-TRIBUNE VIA AP

U.S. construction spending rose to the highest level in more than seven years in June, suggesting that the housing market and business investment can help underpin economic growth amid turbulence outside American borders.

Total construction spending climbed 0.7% from the prior month to a seasonally adjusted annual rate of $1.083 trillion, the Commerce Department said Tuesday, the highest level since May 2008.

Private building led the way, with both residential and nonresidential construction hitting new postrecession highs. State and local government spending dropped in July, but only after posting solid gains during the previous four months.

“The overall impression from the past few months is that the construction sector overall is the strongest part of the economy, with spending up at a remarkable 26% annualized rate in the three months to July,” Ian Shepherdson, chief economist at Pantheon Macroeconomics, said in a note to clients. 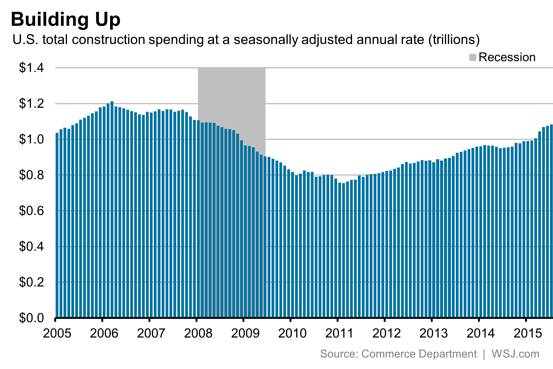 To be sure, construction spending data is volatile and often heavily revised. Low oil prices, meanwhile, may hinder investment in structures used to extract natural resources from the ground. But the overall construction trend has been building through the course of the year and the most recent updates were broadly positive for second-quarter growth. And actual spending during the first seven months of the year was up 9.3% from the same period in 2014.

The latest construction data stand in contrast August manufacturing figures out on Tuesday, which showed that sector expanding but at a slower pace. Other components of the economy have been broadly positive, with second-quarter growth revised to show a healthy rebound and early readings for the third quarter suggesting a degree of momentum.

Morgan Stanley revised its second-quarter gross domestic product growth estimate to a seasonally adjusted annual rate of 3.8% from 3.7% after Tuesday’s construction data. The bank is forecasting growth at a 2.2% pace in the third quarter.

While the U.S. economy appears to be holding its own, growth in China and elsewhere appears to be on shakier ground. U.S. stocks fell early Tuesday following weak manufacturing data from the world’s second-largest economy. 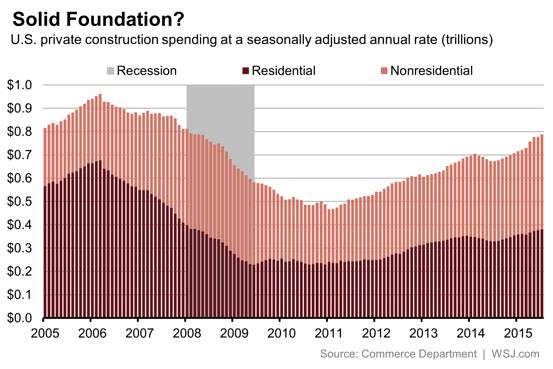 Where Construction Continues to Struggle Years After the Bust