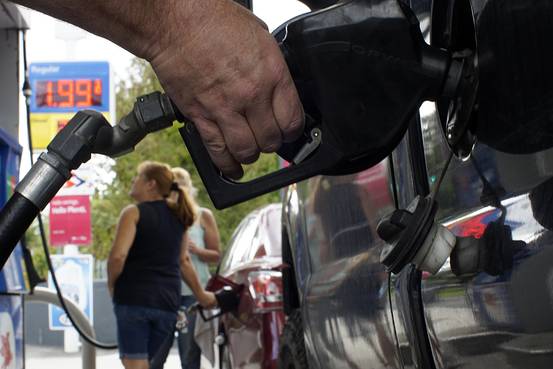 Americans have saved a bundle at the pump since gas prices began to plunge in the middle of last year. So did households tuck the money away, pay down debt or splurge?

New research, based on examining the spending patterns of millions of consumers, found that households were quick to spend most of the benefits from cheaper gasoline. The study finds Americans were far less cautious than previously thought in spending their extra cash.

“Consumers report that they are using their gains at the pump to pay down debts and save. Our data show they are spending most of them,” the J.P. Morgan Chase Institute study said.

Individuals spent 78 cents of every dollar saved on gasoline, with about 18% of that going to eating out and 10% to groceries, according to the study. Other big categories included entertainment, electronics and appliances, and charitable donations.

The findings run counter to earlier studies and conventional wisdom, which interpreted soft overall consumer spending and a rising personal saving rate earlier this year as evidence that households were pocketing their windfall from lower gasoline prices. U.S. retail and food service sales, for example, fell in December, January and February and were flat in April and June, according to Commerce Department data.

The narrative of a cautious consumer–perhaps waiting to make sure gas prices would stay low–flummoxed many economists and confounded expectations for an economic lift from a sharp dive in crude oil prices that has translated into savings at the pump. The Energy Information Administration estimates the average household will save $700 on gasoline this year due to lower prices.

The J.P. Morgan study sifts through data from 25.6 million holders of Chase credit or debit cards, allowing a more detailed look at spending habits from near the end of 2013, when gasoline prices were high, to early 2015, when they had bottomed out. 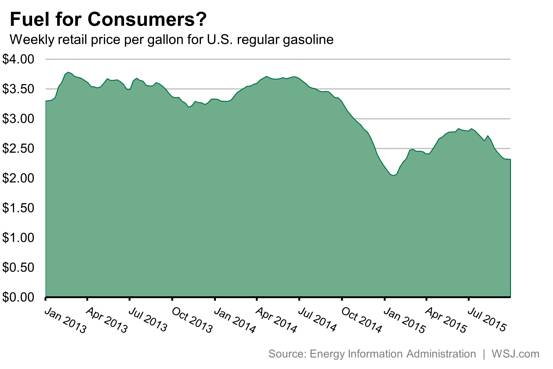 The analysis finds distinct spending patterns by geographic and demographic background. The Midwest and South saw the largest drop in gasoline spending, for example. And low-income individuals saw the largest relative gains–the equivalent of 1.6% of income.

But the overall result shows scant hesitation to spend the gasoline windfall on nonessentials. The finding that individuals spent 78 cents of every dollar of gasoline savings may undercount actual behavior because it is based on credit and debit card transactions, while many purchases are made with cash, with a loan or by other means.

So why did consumers appear to be holding back?

“You weren’t seeing it because there were so many other factors that were hard to isolate with aggregate data, and because some of the now-revised data was not quite right,” said Diana Farrell, president and CEO of the J.P. Morgan Chase Institute.

Another reason the boost from cheap oil may have gone unnoticed: Gas spending represents less than 5% of consumer spending, so the impact from lower prices was small in absolute dollar terms and easily overshadowed by other economic forces, the report said.

More recent consumer spending data shows Americans buying goods and services at a steady clip. And previous months’ data has been revised–significantly in some cases–highlighting the difficulty of measuring the economy in real time.

As Gasoline Heads Toward $2, the Benefits Start to Trickle Down

Savings at the Pump Are Staying in Wallets