U.S. Firms Put Teens To Work To Keep Them From Dropping Out of School – Real Time Economics 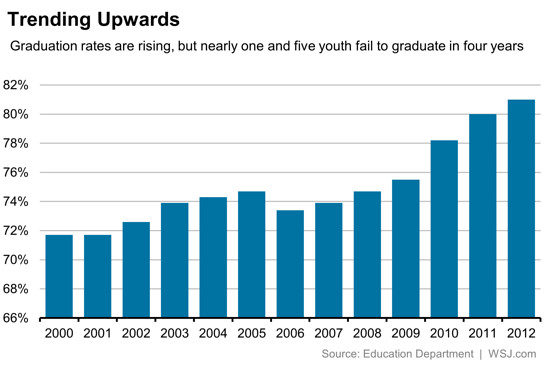 A failure to obtain a high school diploma can be a costly decision for the person who drops out and for society as a whole. That’s why some businesses are getting involved by putting teens to work, as a story in the Journal showed today.

Americans without a high-school diploma over the age of 16 face a 14% unemployment rate, according to Labor Department data. For those between the ages of 16 and 19, more than one in four can’t find jobs.  (The nation’s overall unemployment rate was 6.2% in July.)

Those fortunate enough to find employment usually find themselves condemned to low-paying service jobs and bleak earnings prospects. Average yearly earnings for people who attended high school but failed to graduate were $21,384 in 2012, according to Commerce Department data. Those with a high school diploma earned $32,630, while those with a bachelor’s degree or more made $70,523.

Though the nation’s high-school graduation rate has been improving over the last decade, nearly one out of five youth in 2012 failed to make it across the finish line in the allotted four years, according to Education Department data.

The high number of dropouts exacts a toll on society in the form of a greater need for public assistance and a workforce that is ill prepared for the demands of the modern economy. Dropouts are also much more likely to turn to crime.

Those forces are behind a push by some education experts who think it’s time to shift American schools away from preparing all students to attend four-year colleges.

That might work fine for youth who have role models who can show them the value of studying classic literature and advanced mathematics. But for those from underprivileged backgrounds who don’t, finding ways to combine work and study is a more effective way to engage them, said Anthony Carnevale, an economist who studies education and workforce issues at Georgetown University. “Suddenly they’re in a world that makes sense and has possibilities,” Mr. Carnevale said.

A program run by Southwire Company LLC and the school district in Carrollton, Ga., has helped to improve local graduation rates by offering hundreds of teenagers jobs at the cable manufacturer and an academic curriculum that has been adapted to complement what they learn on the factory floor.

Several European companies with operations in the U.S. are working with local school districts to replicate the apprenticeship programs directed at high-school students that are common in their home countries. In Charlotte, N.C., an administrator for a group of high schools said that participation in Apprenticeship 2000, a program run by a group of eight mostly European firms, has helped improve local graduation rates.

“The way to transform education is providing more kids with work-based learning,” said Michael Realon, career and community development coordinator for the Olympic Community of Schools. “We don’t do that in America, so kids don’t connect the dots between what their learning in class and how it’s going to benefit them in the workplace one day.”