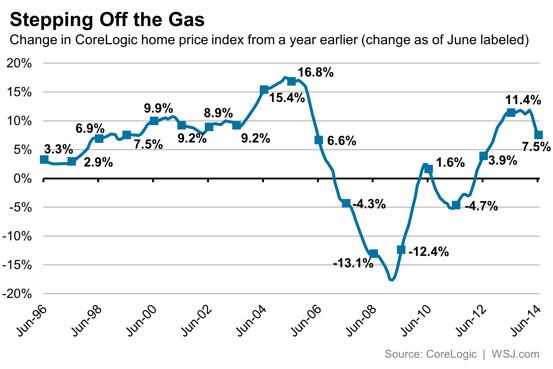 U.S. home prices have slowed down from their breakneck growth pace of the past year, according to CoreLogic’s price index.

Prices were up 7.5% for the year ended in June. That’s down from a revised 8.3% year-over-year increase reported for May, which was initially reported as an 8.8% gain.

By contrast, home prices last June had advanced 11.4% on a year-over-year basis.

The deceleration is probably good news, given that more housing markets have begun to look slightly overvalued on a price-to-income measure. And excluding 2013, the June year-over-year gain is still better than any since 2005.

But as foreclosures fade from more housing markets, prices won’t be influenced as heavily by these sales in either direction.

Meanwhile, inventories of homes being offered for sale are rising slightly, a development that could slow the pace at which prices are running up.