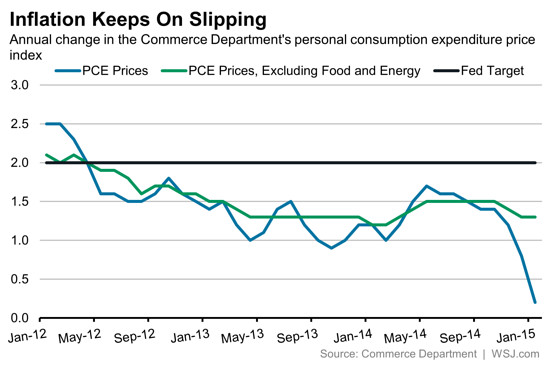 A key gauge of U.S. consumer prices sank in January due partly to cheaper oil, undershooting the Federal Reserve’s goal of 2% annual inflation for the 33rd consecutive month. But a gauge of underlying price pressures remained resilient headed into 2015.

The price index for personal consumption expenditures, which is the central bank’s preferred inflation gauge, rose 0.2% in January from a year earlier. That followed annual growth of 0.8% in December, 1.2% in November and 1.4% in October, the Commerce Department said Monday.

It was the lowest reading for headline inflation since October 2009, when prices rose just 0.1% from a year earlier following seven months of year-over-year price declines as the 2007-09 recession ended.

Excluding the often-volatile categories of food and energy, consumer prices rose 1.3% in January from the prior year. That was unchanged from annual growth of 1.3% in December though down from readings of 1.4% in November and 1.5% in October.

Overall prices fell 0.5% in January from the prior month, and core prices rose 0.1% from December. Economists surveyed by The Wall Street Journal had expected a 0.1% increase for prices excluding food and energy.

Fed Chairwoman Janet Yellen last week told lawmakers that “recent softness” in inflation largely reflects the plunge in oil prices since mid-2014. Prices for energy goods and services tumbled 10.4% in January from the prior month and were down 21.2% from a year earlier, according to Monday’s report.

Ms. Yellen acknowledged slower growth in nonenergy prices as well, which she said partly reflects “declines in the prices of many imported items” and “perhaps also some pass-through of lower energy costs into core consumer prices.”

The Fed is on track to raise short-term interest rates, which have been pinned near zero since December 2008, later this year. It must weigh continued improvement in the labor market against sluggish inflation, which has undershot the central bank’s 2% target since the spring of 2012.

Ms. Yellen last week said the Fed will raise rates when it is “reasonably confident that inflation will move back over the medium term toward our 2% objective.”

Another closely watched gauge of U.S. inflation, the Labor Department’s consumer-price index, fell into negative annual territory in January. The index declined 0.1% from a year earlier, largely due to falling prices for gasoline, the agency said last week. Prices excluding food and energy rose 1.6% in January from a year earlier.