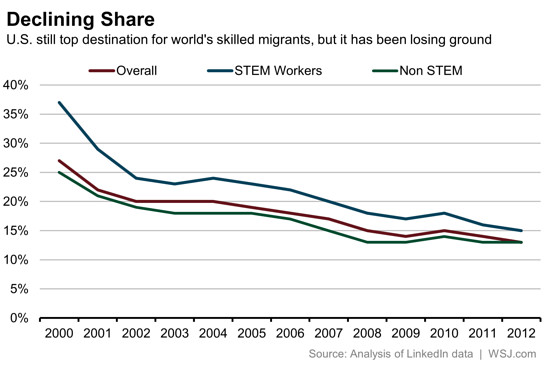 The U.S. is losing its some of its luster as the world’s top destination for skilled migrants, according to a new analysis of LinkedIn Corp. user data.

The study by a group of researchers from LinkedIn, Stanford University, University of Washington and Swiss university ETH Zurich tracked the movements of a sample of users of the online-professional network between 1990 and 2012.

LinkedIn currently has more than 300 million users worldwide, though the number of users tracked for the study wasn’t clear.

The study found that 13% of migrating professionals chose the U.S. in 2012, the highest share of any country, though it was down from 27% in 2000. Over the same period, the analysis found that Canada and many European countries saw decreases in their share of the world’s professional migration flows.

Flows to Asia, Oceania, Africa and Latin America increased. Asian countries collectively saw the largest increase, boosting their share of migration inflows to 25% in 2012 from 10% in 2000.

The study represents the latest attempt to use online-user data to track global migrations. The flows are important for national immigration and fiscal policies, but official data are often inconsistent and incomplete across countries.

The researchers acknowledge the LinkedIn data doesn’t offer a representative sample of the entire population of highly skilled migrants, among other limitations, but did additional analysis to test the robustness of their findings.

U.S. lawmakers have been locked for several years in a debate over how to overhaul a complicated system of visa regulations that critics charge is driving away skilled foreign workers. Earlier this month, President Barack Obama moved unilaterally to loosen an array of immigration restrictions.

The Boston Consulting Group and The Network, an alliance of global recruiting websites, surveyed earlier this year 200,000 workers in 189 countries and found that the U.S. was the most-often-cited destination by workers who considered moving abroad. It was cited as a potential destination by 42% of respondents.