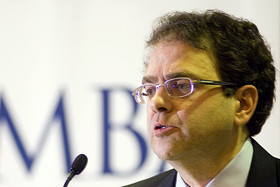 The Federal Reserve has consistently fallen short of its inflation and employment goals, suggesting U.S. borrowing costs remain too high and the country still isn’t making full use of its productive resources, a top central bank official said late Thursday.

Minneapolis Fed President Narayana Kocherlakota, speaking at an event in Helena, Mont., reinforced views that have made him arguably the most dovish member of the central bank’s Federal Open Market Committee. He indicated the Fed should be doing more rather than less to support the economy, saying the country’s falling unemployment rate, now at 6.2%, remains “unacceptably high.”

Pushing back against the notion that too much regulation is hurting economic progress, Mr. Kocherlakota said low inflation was a sign that the economy wasn’t operating close to its full potential, and that consumer demand remains too weak after the deepest recession in generations. A weak labor market reflects those trends, he said.

“There are many people in this country who want to work more hours, and our society is deprived of their production,” Mr. Kocherlakota said.

Asked why the Fed was pulling back on its latest bond-purchase program even though inflation remains below the central bank’s 2% target, Mr. Kocherlakota was stumped.

“That’s a really challenging question — and I don’t really have a good answer for it,” he said. “Given where we are with inflation it’s hard to know why we’re removing stimulus from the economy at the pace we are.”

Mr. Kocherlakota said the U.S. housing recovery has been disappointing over the past year, adding this could hurt broader economic growth.

As the U.S. economic recovery enters its sixth year, Fed officials are starting to debate when to begin raising official interest rates, which have been effectively at zero since December 2008. Wall Street economists are forecasting rate increases will start sometime in mid-2015.

Playing down worries about the Fed’s much-expanded balance sheet, which now stands at $4.4 trillion after multiple rounds of Treasury and mortgage-bond purchases, Mr. Kocherlakota assured the audience the Fed has the tools to tighten monetary policy when the time comes.

In particular, he said the central bank would raise the rate it pays banks to park excess reserves overnight at the Fed to remove liquidity from the financial system.

Mr. Kocherlakota pointed to signs that the official jobless rate was understating the true underlying weakness in the job market, including a large number of Americans who are employed part-time but would like full-time work.

As much as job indicators, he said, the path of inflation should help the Fed figure out when it is starting to approach full employment, which officials estimate would be matched by a jobless rate around 5.2%-5.5%.

“What does maximum employment really mean? It’s the maximum number of people we can employ without imposing unduly high price pressures,” Mr. Kocherlakota said. “So as long as inflation is running below 2%, I think we don’t have a concern that we’re hitting into maximum employment yet, no matter really what our labor market measures look like.”